Don’t know the medialuna from the chocotorta? You’re in the right place — this guide to Argentine desserts is here to help! 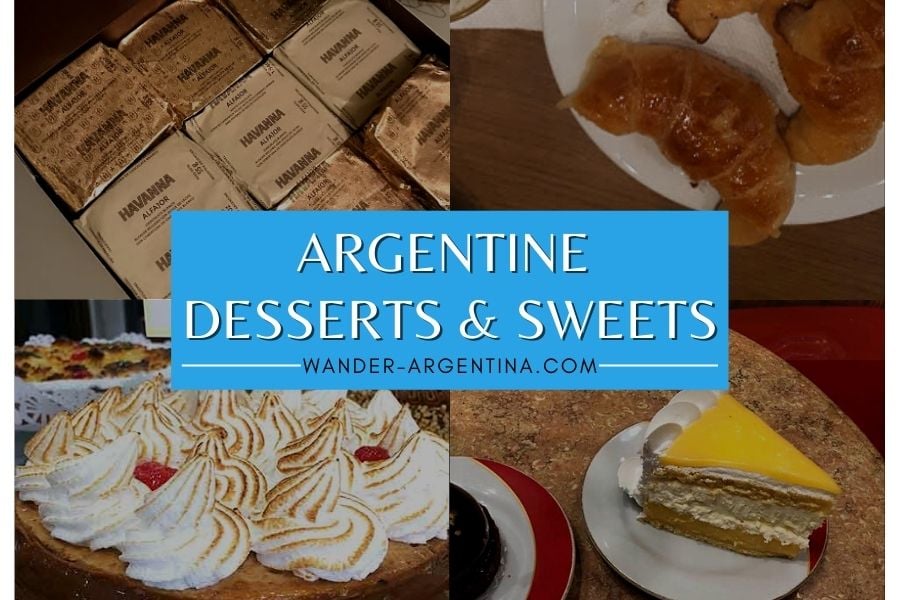 Considered a breakfast food, medialunas are a type factura, the umbrella term for Argentine pastries.

The medialuna, or sweet croissant, is ubiquitous in cafés throughout Argentina as a breakfast, mid-morning, or any-time snack — there is hardly a café or restaurant in the country which doesn’t serve them.

Facturas come in a variety of shapes and flavors from dulce de leche (milk caramel) filled donuts to apple lattices.

The simple medialuna is by far the most popular and widely eaten factura, and as such, they are often seen stacked along the bar in cafes across the country.

The slim lard-made crescents are less sweet, while the larger, butter medialunas tend to be very sweet, fluffy and topped with a sugar glaze.

Alfajores are an Argentine snack cake consisting of two soft cakes, held together by roughly a centimeter of dulce de leche, jam or mousse and covered in meringue powder or chocolate.

The Argentine twist on the ancient Arab dessert, alajú, this portable treat became popular in the mid-19th century in Argentina.

Today, Argentina is the world’s number one consumer of alfajores.

Visitors to Argentina cannot leave without trying at least one alfajor, and they aren’t hard to find.

Commercial versions are available in every supermarket and there are specialty alfajor shops all over the country.

Locals describe chocotorta as ‘a cake that you cannot possibly get wrong.’ This claim to fame has made it a staple of those who cannot afford to bring a good bottle of booze to a birthday party.

On the rare occasion, sophisticated versions are served at upscale confiterías, but the typical peasant version is made with store-bought chocolate cookies called Chocolinas soaked in milk or coffee, and then layered with dulce de leche and cream cheese.

Some versions omit the cream cheese and just consist of a layer of the chocolate cookie cake with dulce de leche smeared on top.

This adaptable cake requires no baking and can be made in a pinch. Recommended for afternoon tea with a submarino (Argentine hot chocolate).

Pasta Frola, the most pie-like of Argentine desserts, looks and tastes a lot like a sophisticated jam tart. The standard version of this tart is made with dulce de membrillo, a quince jam or dulce de batata, a sweet potato mash that makes this version more like a pumpkin pie.

This delicious baked dessert’s easily available ingredients make it one of the most affordable desserts in the country’s bakeries and confeterías. Eat accompanying an afternoon mate for a true Argentine experience, or head to the classic Las Violetas Café to try it amidst old world splendor.

Crumble de Manzana (apple crumble) is a more recent addition to the Buenos Aires dessert scene. It can be found in many patisseries (pastry shops), and bastardized versions even make it onto the dessert lists in fast food restaurants.

The rare British contribution to Argentine dessert, apple crumble is just apple, sugar, wheat, butter and cinnamon – basically an apple pie with a crumble topping. It is sometimes served as an entire cake and sometimes in little squares at a café.

As one of the few Argentine desserts to not feature dulce de leche, this cake makes regularly appearances at gatherings of people who haven’t adapted to the Argentine put-dulce-de-leche-on-everything dessert custom. Serve warm with vanilla ice cream for a classic treat.

Lemon Pie (tarta de limón con meringue) is essentially the Argentine lemon meringue pie. The only difference is that despite the name, the lemon meringue is actually the main feature rather than a mere sweet accent on the lemon filling and crust.

The Argentine incarnation of lemon meringue pie comes with a debilitating sugar high, but in the best versions the lemon filling is sharp enough to stand up to the two inches of meringue.

A delicate pie that she only be entrusted to experienced bakers. Pair with a white citrus Moscato from Mendoza for an all-around Argentine treat.

Known as torta rogel in Chile, where it is even more popular, it amounts to layers of filo pastry held together with an abundance of dulce de leche, and covered in chocolate, or sometimes meringue or coconut.

Unlike chocotorta, this cake takes some effort as the dough has to be prepared in advance, ideally somewhere cool and dry.

The fanciest version of this cake is a staple at Argentina weddings and Chilean birthday parties.

Sopa Inglesa, literally translated as ‘English soup,’ has more to do with Italy than England and nothing to do with soup.

Sopa Inglesa is a cake often found in pizzerias, as it is obviously the thing needed to wash down a pizza. The truly Argentina version is Sopa Inglesa de dulce de leche.

Eat with an espresso, following a couple of classic slices of cheese-laden Argentine pizza, and then be rolled out of the pizzeria and marvel at how the locals aren’t obese.

Tarta de Coco, coconut tart, is ideally made with fresh coconut, which is hard to come by in Argentina, so finely shredded coconut is used instead and — to accommodate the Argentine sweet tooth— dulce de leche is usually thrown in for good measure.

It consists of a shortbread crust layered with dulce de leche and topped with coconut, that toasts nicely on top.

This sweet tart can result in sugar rush panic attack but in moderation, this cake is delicious, with the grainy consistency of desiccated coconut cutting through the usual sickly-sweet feeling of too much dulce de leche.

The other great thing about Tarta de Coco is that bakeries will often sell little pyramids of unsweetened desiccated coconut for making cakes at home, but they are available to just buy in a bag.

Those on the move can skip the cake-making and just buy ask for some ‘coco desecado‘ at the bakery and munch on the dried coconut for a portable healthy treat.

Tiramisu is probably a front-runner for one of the best desserts on earth, which is why so many countries across the world have adopted it as a classic.

Tiramisu is of course Italian and not Argentine in origin.

It’s wide availability, and tiramisu made with dulce de leche has converted this dessert into an Argentine staple.

Creamy mascarpone, coffee liqueur and lady finger biscuits have combined to make a dessert so popular it is even available as an ice cream flavor across the country.

Many Argentines hold a soft spot for this dessert due to its ‘just like grandma used to make’ memories of their childhood.

Tarta de Ricota is a good bet for those looking for a dulce de leche-free dessert and it works well with coffee, mate or with black tea, as it’s served in Patagonia.

Anyone who has ever visited a restaurant in South America has at some point seen the word ‘flan’ on a menu.

In Argentina, behind medialunas and alfajores, flan probably holds bronze medal for the most common Argentine sweet.

The official definition of ‘baked custard’ really doesn’t even begin to explain the gelatinous, wobbly mound of eggy, creamy deliciousness that is flan, which also appears to be the only substance on earth that can stand up to a fifty-fifty accompaniment of dulce de leche.

Possibly the greatest thing about flan is that its not-quite-solid state means it can be almost painlessly eaten even after devouring an entire cow at an asado (Argentine barbeque).