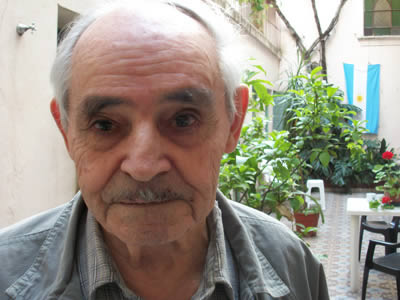 • You’re originally from Galicia, Spain. How and why did you come to Argentina and how old were you?

It was much harder to come here at that time  — you needed a family member, like a cousin or something, who was willing to offer to provide food and housing for at least three years.

• Why did you immigrate to Argentina?

I came from total misery. I had to work 15-16 hours a day in Spain and I still didn’t even have money to buy shoes. So when I came here I also worked long hours but at least they paid me well. I began to enjoy the work in the hotel. It was something that I had never done before but I liked all the contact with people.

• How did you come to own your hotel? When did you buy the Victoria?

I started renting the building in 1959 – it was already a hotel so we just took over the management. In 1964 my wife and I bought the property.

• How long have you been married and what is the secret to a long and happy marriage?

We’ve been together 54 years. The secret to a happy marriage? I never wanted my wife to be a slave. I wouldn’t just come in kick my shoes off and sit down, or leave the bathroom dirty and let her pick up after me. I always tried to make it so that my wife was my companion and collaborator, not my slave.  A good husband should not make his wife be a slave. She was my compañera. I was lucky that she is a very competent and smart person. She worked in a factory when we got married but then we worked here together. We even worked during the honeymoon!

• Does she still come and work here?

She doesn’t work here now because she is fat and has health problems but we used to live here (in the hotel).

• There are many tango dancers who stay in the Victoria. Did you ever dance tango?

No, we didn’t dance tango but we used to go to a lot of parties. All of us from Galicia, we had a quinta (country house). We would go play bocce and there was a pool, we would have asados (barbeques) out there. People have gotten old now or died, so those reunions don’t happen anymore. Now I just go for a stroll and look at the trees.

• What is the story behind the plaque on the building that says, ‘Para familias and cabelleros‘ (For families and gentleman)? Do gentlemen even exist anymore?
Maybe not like they used to! This used to be El Triunfa Hotel. They put that plaque there, I don’t know why.  In reality, I didn’t want it to be mainly for families when we opened.

• And can you tell us about the little look-out tower on the back of the building? We can’t go up in it because there is a lock on the gate.

The tower in the back? It dates from 1917 or 1918. It was a lookout point, because at that time it was one of the highest buildings around here. You can’t go up there because it is very old and thieves can get in that way from other buildings, so we have it locked.

• Have you been a victim of crime lately? Has the hotel been robbed?

No robberies at the hotel, but sometimes things disappear like towels or whatever. If we discover — or suspect — someone is a thief we make a note and keep track so that they can’t come back.

And at our house we got robbed. My wife and I were taking a nap in the early evening and some guys entered and stole stuff. We didn’t even know they were in the house – they didn’t enter the bedroom. We never found out who did it.

• What was the craziest thing that ever happened in the hotel?

One time, about in 1977, there was a fight. There were about 10 to 15 fellows who would get together and drink wine and play music. Well, they were getting a little out of control and I went to tell them to be quiet and they beat me up. I was bleeding -– there were about 15 of them against me!

• What were the best years in Argentina for you?

The years of ’60 to ’65 were the best.  During the dictatorship was also good.

There was a lot more order during the dictatorship. There wasn’t so much crime. Go ask the Madres de la Plaza de Mayo what their kids were doing before they were disappeared? It was peaceful at that time — they didn’t bother people like me who worked. The people they bothered were troublemakers.

• What about the people that were killed by the dictatorship?

At that time they were also able to interrogate a suspect on the spot. Now if there isn’t a judge’s order, they can’t do anything and the thieves get away with it.

• What is the secret to happiness?

Happiness comes with love and respect. You also have to be happy with what you have. Also camaraderie and companionship are important. If my wife is happy, I’m happy. We don’t fight or refuse each others’ requests.

I’m happy to give a lot of thanks to Argentina because I was able to come here, I always had work and I obtained everything I wanted.