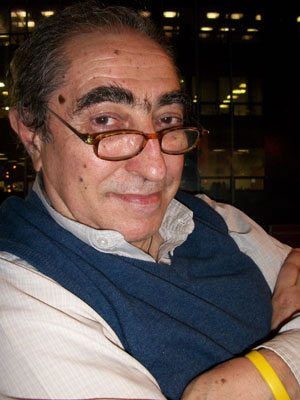 Q: You used to write for Playboy. You know in English the old quip men say is, ‘they read it for the articles.’

It changed when (Hugh) Hefner’s daughter took over the publication. She wanted to make it more of a glossy table magazine, more feminine.

More feminine in the sense that the characteristic of the magazine changed. It used to be a magazine for boys returning home from the war, but she started to incorporate things like fashion, more ‘light’ topics.

• Being a journalist what was your life like during Argentina’s military dictatorship?

Yes, on top of it I’m a political journalist. We lived abroad for three and a half years, in Switzerland, once we had sons and after the loss of the Falklands War there wasn’t the same risk — it was clear that the military government was becoming politically weakened. There was less repression after we moved back.

• How did you find Argentina when you returned?

Well we were happy to be back — it was pretty much like it was before the military came into power.

• Why does Argentina struggle so much when it has the resources to be a very strong country?

Argentina is very modern in many aspects, but it doesn’t have a particularly good position in the world. I just came from a conference discussing education and we’re compared with other South American countries, not Europe, as we’d like to think. In Chile, for every 100 students that graduate high school, 60 to 70 go on to university. In Argentina, out of 100 students, only 19 graduate university. But university is free! There are resources that are provided for this, the problem is the primary and secondary education has become very poor.

Five years after a student graduates university they have returned the investment the government made on them but the universities don’t spend their resources well. There is a lot to change because there is too much back and forth among us, which results in nothing getting done. In Chile and Uruguay they work together to complete things instead of being polarized due to being too impassioned. It would be better if we were more boring and organized!

• Tell me what happened to your political blog that was hacked in 2007?

Well I wrote something about the (then) Minister of Justice (Aníbal Fernández) in the newspaper ‘La Capital’ of Mar del Plata and we engaged in a pretty heated debated back and forth in the editorial section of the paper. I put the whole series and some notes in my blog and the blog was hacked.

They were also able to send comments to others through my email address. I believe that (Argentine Minister of Justice) Aníbal Fernández was behind it. I can’t prove it for sure, but the same thing happened to other people whom he had a beef with.

• What is your opinion of the state of journalism in Argentina?

There is a lot of personal aggression between the government and the newspapers. They make these official TV programs and just systematically campaign. It’s not for nothing that the current government is acting like the military government after the Malvinas— they are weak. This government fights with all the newspapers. When you are strong you don’t have to act like a master of puppets behind the scenes.

• What local newspaper do you read?

I read all the newspapers. They are generally unbalanced if you compare them to each other. Each paper gives out different ‘facts’. It’s getting better, but you have to read a bunch of newspapers to get a good idea of what’s really going on.

• What do you think of Argentina’s answer to Michael Moore, Jorge Lanata?