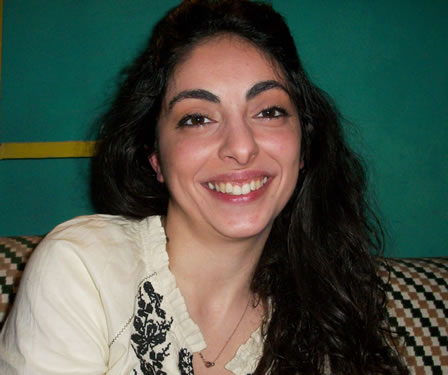 Q: What made you decide to study medicine?

I always said I was going to be a doctor from a young age. It’s odd because we’re a family of lawyers—my mom and older sister are lawyers, but I wanted to know how the human body worked. I didn’t start studying immediately when I finished high school though. I really got turned off to medicine because I contracted a resistant strain of tuberculosis at 16 years old and had to come to Buenos Aires from Paraná to receive treatment that lasted until I was 21.

In 2003 I decided to start studying. It was that old question: ‘What would you do if you were going to die?’ and I decided I better do this since I always wanted to. Also, I like people. It’s a profession that allows you to get to know a whole new world everyday because every patient is a world unto themselves.

• Why did being a patient turn you off to being a doctor for a while?

A lot of doctors are quite harsh. They treat the disease and not the patient. I had doctors that saw me for years and didn’t even know my name. One day one of them referred to me as ‘a typical case’ of my disease and I thought, “No, but I’m a person!” But I had a lot of talks with my mom and after a while decided that I could retain my values and become a doctor.

• So you completed six years of study and now only need to do your residency to become a doctor. What made you decide to open Las del Barco with your sister?

I studied paint and sculpture for two years and my sister did theatre so we wanted to have a project where we could be doing these things and learn something about gastronomy.

We like to eat in my family. My grandma cooks all the time using the vegetables from her garden. It was always, ‘Let’s go eat in ‘Las Del Barco,’ so we wanted to keep that idea going.

I always had an interest in food as well. At eight years old I told my mom I didn’t want to do ballet anymore, that I wanted to cook, so I was enrolled in a cooking class where I went to learn how to cook alongside a bunch of old ladies.

• Maybe it has to do with the fact that university is free here, but for some it could seem illogical to study all these years to be a doctor and then decide to do something entirely different. What do you think?

I believe one can do many things in life. I know I’m going to be a doctor eventually. If I live to be 70 years old and work as a doctor for 20 years of my life — that’s sufficient. Also we’re hoping that once we have a staff in place the bar will take care of itself.

I’m very passionate about many things in life. Even here at the bar we sometimes get to talking about health issues. One thing doesn’t nullify the other.

I don’t know how long the bar will last. That’s the thing about life; you never know what will happen. I know that in April of next year I’m going to do my experiential practice for my degree and I would like to do it overseas.

Maybe it also has to do with the fact that from 16 until 21 I thought I was going to die, so that changed my vision of life.

• You’re smoking even though you had TB. Why is it that so many doctors don’t take the advice that they are supposed to hand out to their patients?

I shouldn’t smoke. A doctor has to say to their patients that it is bad. We all know that smoking is bad for your health. The funny thing is that while you’re studying to be a doctor and doing the residency the rigorous schedule doesn’t permit us to eat or sleep well, so we can’t take the advice we hand out ourselves. It’s rather illogical.

I normally don’t smoke that much but I’m smoking more now because my dad died a short while ago.

• So would you tell a patient that they shouldn’t smoke?

It depends on the patient, but the majority, yes. What needs to be factored in is the patient’s social reality. If someone smokes 40 cigarettes per day maybe it’s more realistic to just encourage them to cut down. An emphasis needs to be placed on the relationship with the patient. If you put a bunch of restrictions on them that they can’t comply with, they may not come back for a check-up, which is far worse. The relationship with the patient should take precedent over everything else.

And who is to say how someone else should live? The odd thing is, as a doctor you are in a position of authority to tell people how to live their life but in the end you accomplish nothing if you’re too heavy-handed with your advice.

• How did you get the money together to open the bar?

Mostly from help we received from our parents.

• How does your family feel about you putting your studies on hold and opening the bar?

They’re fine with it. They just want us to be happy. My parents taught us to be free and to think for ourselves. We’re idealistic in my family. None of my brothers or sisters elected a very easy path in life but really any experience has value — it’s not a waste of time.

• What do you think you’ll be doing in five years from now?

What a difficult question! I think I’ll be a pediatrician and I’ll be studying to become a children’s psychiatrist.