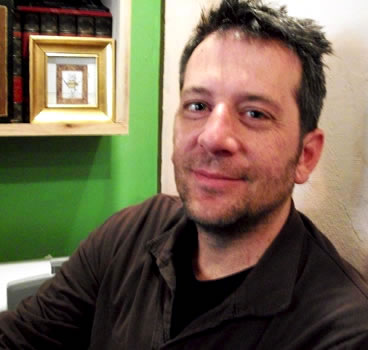 • Why did you guys decide to open your bookshop in San Telmo?

We live in Palermo and originally the bookstore was in our home in 2004-5.

We were looking for a nice place and Palermo was just too expensive but we were able to purchase this location in 2006.

• Do people even read anymore?

Argentines tend to buy a lot of books – they are a big part of our business, about 40%. Another 30% are expats and another 30% are tourists.

• What is your favorite book?

I have to choose one?

That’s a hard question to answer. Slaughterhouse Five by Kurt Vonnegut is a favorite and also East of Eden (John Steinbeck).

• And how about your favorite Argentine book?

I haven’t read too much Argentine literature, but I enjoyed Santa Evita by Tomás Eloy Martínez, it’s a historical novel about Evita.

• What about the favored Argentine writers such as Jorge Luis Borges and Julio Cortázar?

When I first got here I read them in English, but the style is much more intellectual than the things I enjoy reading.

I like narrative and that’s what Argentines seem to like too. They come in here looking for James Joyce and William Faulkner. We’ve sold about 20 copies of Ulysses to Argentines.

• Why did you originally come to Argentina?

I came to teach English and learn Spanish.

I almost went to Russia instead of coming here – I wanted to learn Russian so that I could read Russian books in their original language. I like the Russians.

• How did you decide to open the bookstore?

It was my wife’s idea. We just started with the books I brought down from the U.S. I brought down about 220 books. So we opened it up in our house at first just to test the waters and see if it might work.

• What did you do before you came here?

I was in Boston teaching English, I did that for about five years.

It’s important to have some experience to be able to teach. Some people think they can just come down here and pick up some classes but you need to know how to teach English, not just speak it.

• You mentioned you have a four-year-old daughter. Is she bilingual?

She’s getting there; she speaks more Spanish than English.

• Have you changed, –‘become more Argentine,’ so to speak, after living here ten years?

For instance, are you addicted to yerba mate or do you lie to the shopkeepers about whether you have small change?

I like mate. I’m sure I’ve picked up lots of local habits.

More than anything my perspectives are different than they were before, especially my thoughts on success or ambition.

I think here I don’t feel the same pressure as if I were in the U.S. to earn money and own property. In that aspect, I think it’s easier here than there.

• How often do you go back to the States and do you experience any reverse culture shock?

I go back about once a year. For a while it was pretty strange, especially during the George Bush years.

There were SUV’s and huge houses and all the flags.

That caught my attention but now I think that has died down.

For a while it was hard to go back because of all the box stores and McMansions.

As a visitor, it was so clear that there was a change while the people living through it didn’t seem to notice it as much.

• But wasn’t the boom in construction and the SUV’s everywhere going on in the 1990’s before you left?

In 1999 in Boston the economy boomed with all the construction.

It wasn’t really as prevalent while I was living there. There were things that I didn’t notice as much until I returned.

• Where do you like to hang out in Buenos Aires?

• Is the book industry threatened by the Ipad and other electronic book readers?

The Kindle is probably the electronic book reader that is the biggest threat to the industry, but it’s not like there is no difference at all compared with reading a book.

Reading a book is definitely different and there are still a lot of titles that you can’t find in digital form.

* While in San Telmo, don’t miss the nearby San Telmo Market and the weekly San Telmo Sunday Antiques Fair.