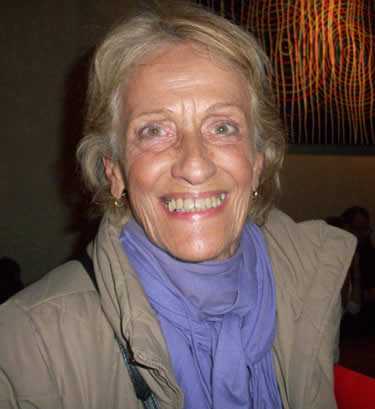 • It’s a big debate among residents of Palermo. Do you refer to your neighborhood as ‘Palermo Soho’ or ‘Palermo Viejo’?

I prefer ‘Palermo Viejo.’ Now they have all sorts of names — Palermo Soho, Nuevo Soho. There was once a time when all of Palermo was just Palermo.

• You’re one of the few women your age in Palermo Soho who doesn’t seem to go around trying to look decades younger than she is, do you ever feel out of place among the plastic surgery victims?

Normally I don’t frequent those circles of society, sometimes I go to a restaurant around here and those types of people are there but I don’t really pay attention.

• Where did you grow up?

I was born here but lived in Brazil until I was 10 years old. As an adult I lived in Europe for ten years and the states for five years.

• Your English is excellent.

Well, I went to an English school as a kid and did the Cambridge course with the British Association and all that.

• How did you make your way to Europe?

I went to Europe right after college and while in Paris got a postgraduate in engraving.

• What was Paris like at that time? What year was it?

It was about 1979. It was very lively. It was very nice, there were plenty of opportunities. At that time it was more heroic, in a way. I have nieces and nephews who live there now, and they were very organized about it. They have families, so it’s a different experience for them.

When I went there, I didn’t know where I would stay.

• Were you single at the time?

I went over with my husband, but he stayed in Milan and I moved on.

• Did you ever get married again?

No, I didn’t really feel like I had to but I had a couple of ‘couplehoods.’ Honestly, I didn’t even think about it.

• It must have been pretty unusual for a woman to be so free-spirited among some of the people you knew at the time.

I have some friends who think like me, but others got married. I have one friend who traveled all over the world like me and finally at my age — around 60— she met an American man – it happened here, after all that traveling around.

I work a lot though now I don’t get much of a chance to socialize like that.

• Where was the last place you traveled to?

I went to Rio (de Janeiro) for three months in December. I thought I would like to live there, but it wasn’t so easy to get settled there and do all the paperwork, even though it’s a Mercosur country, so I came back.

• What else do you like to do in your free time besides paint?

I like to read. Right now I’m reading (Carl) Jung and ‘The Secret of the Golden Flower.’ I go to the gym sometimes to go to the swimming pool. I like T’ai Chi, sometimes I go do it in the Bosque of Palermo.

• So do you appreciate Freud too? What is your opinion of him?

I don’t think anything of him. Would I tell you to read a Freud book? No. But Jung, yes. He was very clever.

• What is you opinion of psychotherapy, since so many people do it here in Buenos Aires?

I did it for several years; sometimes it can help. It helped in some periods of my life, sometimes there are problems that one can’t overcome on their own.

• What about people who go for years and years, like the typical Woody Allen caricature?

Well you can’t get addicted to it — sometimes people replace their issues with an addiction to psychotherapy. I like Woody Allen though, for his character it works.

• So all these years and all these places, which time and place was the best of your life?

Best time? I’d have to say here and now. Now is the best time, with all the good and bad.

Maybe I felt more intense when I was younger, I lived more intensely which means your bones don’t ache so much and you think fast, you’re more bold in your decisions. Now I get attached to things. But like they say, ‘A rolling stone gathers no moss’.

• Do you have any kids or pets?

No kids. I had a dog who found me. It affected my life. It was hard to find a place to live with a dog. I ended up living in Escobar (province of Buenos Aires).

My neighbor found it when she was in the park with her boyfriend. She brought it by and then took it home, but her dad hated the dog and kicked him out. So the dog came back over to my house and found his way inside.

• What was his name?

You’ll never believe it — ‘Bullshit.’ It was the name my nephew gave him. So I would go walking with him on the leash and people would ask me his name and then exclaim, “¡Bullshit! ¡Que lindo!”

I lived in New York, Miami, Dallas and Los Angeles. It was four or five years in all. I worked on cruise ships, so I went back and forth. I love New York, I had a lot of friends there.

It costs more than a flight but these were mixed cruises with passengers and freight, with maybe 80 passengers. You can get some from New York down the Atlantic Coast, there are ways of doing it.

For long cruises it’s good because you don’t have to pay for a hotel in every place and you can cover a lot of ground. It’s good for old people who don’t move so fast.

• So out of all the places you’ve been what is your favorite?