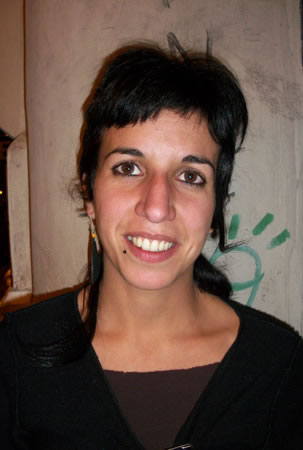 Q: How long have you been selling here at the San Telmo street fair?

I’ve only been doing this since last December. Before that I was living in Bariloche and making handmade dolls.

• Why did you decide to move back from Bariloche?

I broke up with the father of my daughter and Bariloche is too expensive to rent an apartment by myself. So it made sense to come back.

• What do you like about making and selling clothes in the street fair?

I like that the people enjoy my clothes. I like to see how it fits on them. I’d like to do this full-time but the hard part for me is the selling. I don’t like being pushy.

• Who are most of your customers?

Most of the people that buy from me are Europeans and Americans.

There are a lot of them here at the fair on Sundays. Eight out of ten people that buy from me are foreigners.

• Do people try to bargain with you a lot since you sell on the street?

Mostly the foreigners will try to bargain with the price, Argentines never do that.

• How do you feel about people bargaining for a lower price?

If they’re short five pesos that’s one thing, if they want a large discount it’s different. I don’t make any money if I take that much off the price. What’s weird is, if I explain that, they’ll still buy in the end.

• Which nationality haggles the most?

Brazilians probably, but they’re still cool about though.

• What do you like about the San Telmo street fair in particular?

There’s cool people here, we’re friends with the other vendors it’s like a little group. We share mate and things, hang out — it’s a good time.

Yeah, we sometimes had problems when we were on the other side of Independencia (Avenue)— you could only set up after 4:30 or so. Over here they don’t bother us.

• How much did you make today?

• What’s the most surprising thing you’ve seen working in the market?

Well not much would surprise me; I’ve seen everything here. This is San Telmo! A little while ago the half-naked travesties came by promoting the club that they have on Sundays.

What would you call your fashion style?