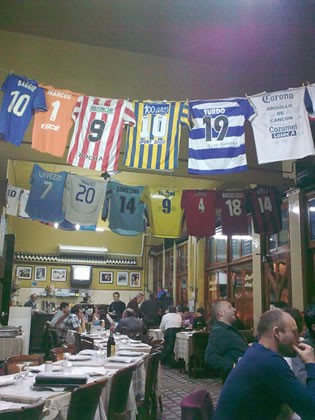 Cantina Los Amigos is the kind of neighborhood pit stop that touches on some core elements of what Argentina is all about: football, food and feisty characters.

The grill is always fired, the pasta is homemade and wine is served in classic penguin pitchers in a boisterous venue that recalls the Argentina of yesteryear.

In typical canteen style, the table clothes are white and disposable, a basket of crisp rolls and a bottle of red wine adorns each, the menu is slotted into A4 plastic sleeves and is presented in no logical order and portraits of Evita and Peron oversee it all.

There is a crazy cat on the way to the bathroom and there will quite likely be a few tables of vocal Argentine men on ‘guy’s night out.’

Los Amigos, founded decades ago and still run by the founding Zorzoli family, is famous for being the feeding ground for famous footballers. From the ceiling hangs the proof — dozens of football shirts, new and old are pegged to clothing lines across the ceiling, signed by the players who have dined in the modest locale.

As the name suggests, this is a place to head with friends. The environment in the always-packed cantina resembles a football stadium —you will have anything but a calm and serene evening.

The service  at Los Amigos is impeccably efficient, albeit a tad rushed and occasionally gruff, which is just part of the charm. If you don’t fancy an enormous bife (not many have mastered the art of digesting so much red meat at typically late dining times) try the ‘old lady’s daily special’ or the barbecue roast chicken.

The homemade pastas are available with a large variety of sauces — try the finger thick spaghetti with bolognese sauce.

Los Amigos also offers the standard options seen on menus at neighborhood places such as this: omelets, tortillas, tartas (Argentine styled-quiche), lasagna and the omelette de la casa stuffed with vegetable, ham and cheese and made with at least six eggs.

Other than the expected and therefore excusable poor quality of the mixed salad, the quality here is high and the portions extremely generous. If you have the appetite of a footballer, for dessert try the flan con dulce de leche or bread pudding.

The Friend’s Canteen delivers typical Argentine-style Italian-food, cheap red wine, a local and lively atmosphere, and an unmistakably Argentine experience, all for much less than fancier tourist dining destinations. 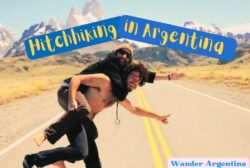