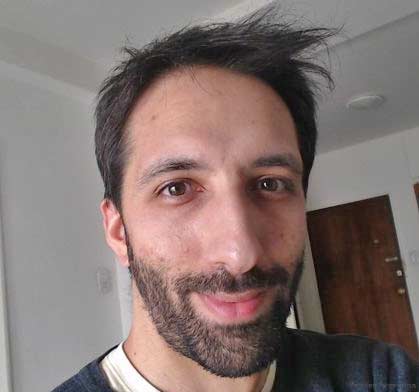 • People love your novels for Spanish language learners (which you write under the name Paco Ardit) and you’ve had a lot of success selling them. What motivated you to write books for language learners?

Back in 2012 I was learning German, and I struggled to find good reading materials for beginners. The novels and stories intended for native speakers were too hard.

At the same time, I didn’t want to settle for children books: they were just too boring and uninteresting for an adult learner. After a lot of research I found a great series of easy readers for German language learners. They were both easy and fun, and had great characters and plot lines.

This was the biggest inspiration for the Spanish Novels Series. For a long time I had been really passionate about learning and I had always wanted to create an online product. So, I thought it might be a good idea to combine these two things. That’s how I came up with the idea of creating an e-book — an easy reader — to help people to practice their Spanish skills. More than a year later, I wrote a second one and that’s when I thought I could create a whole series from beginner to advanced.

• You also speak four languages. Do you have any tips for those learning Argentine Spanish or any second language? Or learning tips in general?

Get immersed in the language you want to learn. Many people think the only way to do this is to travel to the country where your target language is spoken. These days, if you have Internet access and a couple electronic devices you can recreate any language environment you want.

Someone in Argentina can design her own Japanese reality in Buenos Aires. How do you do that? Easy: you forget about your native language and consume media in your target language only, all day long (as someone suggested: “Turn the TV on [in Japanese] now and turn it off in two years”).

If your target language is Japanese, you’ll watch online movies or series in Japanese, listen to Japanese music, read Japanese articles, read Japanese comics and novels. Japanese is your main language now.“Fake it ’till you make it,” as the saying goes.  This holds true even if you’re a beginner. Even if you miss a lot of what’s going on, it helps immensely. Getting massive exposure to the language we want to learn is crucial. In the beginning it’s also better to focus on passive input (reading and listening). Once you have built a large enough passive vocabulary, the active part (writing and speaking) gets much easier.

I think it’s important to take responsibility for our own learning. Learning is a very personal process, and we have to fully own it. Having access to a good teacher or a mentor is great, but we are the ones who need to put in the work and the effort. Don’t wait to be spoon-fed everything. Be curious, be proactive. Feel free to experiment. Spend a lot of time with the language and don’t neglect the practice!

• You also teach piano. What are the differences in learning a language and learning an instrument?

I think the main difference is that, to learn an instrument, we need to take care of more technical aspects. There’s this thing called ‘instrumental technique,’ and it’s important to get that right to make progress in our learning process. Unless your instrument is the voice, usually the music instrument is an external object. That has its pros and cons. It’s nice to have an external reference to see how we’re doing. When we’re learning a language though, many of the processes take place within us (think of pronunciation or how to come up with a full phrase). On the other hand, when someone is learning an instrument there are lots of new movements to integrate with our system. All in all, I think it takes more time to get really good at an instrument, than to get fluent in a new language.

There’s a music learning approach called ‘Suzuki method’ that approaches the process of learning an instrument just as we naturally learn our native language. All of us got started in our native tongues by tons of listening and speaking. Reading and writing come much later. The ‘Suzuki method’ encourages students to listen to a new piece lots of times and then learn it ‘aurally’ with the help of a teacher. They start learning by listening and speaking (playing). Only after a while they are introduced to music scores. Even though I don’t use this method, I adapted some aspects of the philosophy to my teaching style.

When it comes to practice they’re also similar. Both if you want to learn a music instrument or if you want to get fluent in a new language, you’ll need consistent daily practice.

• You are the President of the Argentina Toastmaster’s club. How did you get involved in that and what has involvement in Toastmasters brought to your life?

I learned about Toastmasters thanks to Steve Pavlina’s blog. In February 2015, one month after I moved downtown, I went to a meeting as a guest. The next day I joined the club as a member. In the beginning, I was interested in developing public speaking skills while getting some English practice. After a few months I was hooked on the leadership part as well. I was invited to join the Executive Committee of the Morris Gellman Toastmasters Club (the first English club in Argentina), and fast forward three years and I’m serving as the President of the club.

Toastmasters helped me on so many levels. I’m super grateful. I got to know fantastic people, made new friendships, and explored different life paths. I always approached it as a training ground. As I got involved in different roles and functions during these years, I had the opportunity to learn and practice many skills that helped me both to grow my business and to improve as a person. I can’t recommend it highly enough!

• You are interested in meditation and have done meditation retreats. Can you tell us a little of about how meditation can aid in learning?

Meditation is a great tool to develop mindfulness — awareness of the present moment — and concentration — the ability to focus our mind on a single object. These are crucial skills to learn virtually anything. When you’re learning something you need your full attention there, moment to moment. If your mind drifts you’re wasting your time; you’re deluding yourself thinking you’re practicing or learning when you’re not. Mindfulness helps us to be aware of what we’re doing, and how we’re doing it. With concentration, on the other hand, it’s important to stick with the object of our practice and to focus our mind as if it’s a laser beam.

• You are also a vegan, which must be a challenge in one of the world’s most carnivorous countries. How do you do it and what do you eat everyday? Does being vegan in the land of asados affect your social life at all?

In the beginning it takes a little bit of self-discipline, but then it gets easier and easier. I used a gradual approach: first, I cut out all meat.

After a few months, I stopped eating eggs, and then continued dropping other animal products. It didn’t happen overnight.

I introduced new foods and recipes to my diet gradually. I was saying goodbye to many things, but at the same time I was introducing a lot of new things. There are so many tasty and healthy fruits, veggies and plant-based products. It’s insane!

I also took it as a learning challenge on health and nutrition. Intuitively, the idea of getting all the nutrients I needed without using animal products felt right.

I thought: if I can get everything I need on a plant-based diet, why would I continue supporting an industry (meat and dairy production) that causes so much suffering to so many beings?

It just feels out of alignment with my personal values. I’m lucky enough to be able to choose which foods I want to eat. So, I choose plant-based foods.

What I eat everyday varies. For breakfast I usually have a big bowl of oatmeal with soy milk (or another plant-based milk), nuts, chopped fruit, corn flakes, and granola.

Some days I might have a huge smoothie (plant-based milk, a few bananas, cacao and cinnamon), or either a coffee with soy milk, and some toast with peanut butter and jelly.

For the main meal I usually have a couple veggie burgers (made out of quinoa, lentils, chickpeas or some other legume/cereal combination), a salad, and some rice, potato or yam.

• You’ve also volunteered with the housing non-profit organization, Un Techo para mi Pais. Can you tell us a little about your experience with Techo?

It was great. I found them after searching for volunteering opportunities in my area. I completed a form telling them I was interested in helping out.

Soon after that I received a message from the organization and scheduled an interview. In a couple weeks I was volunteering in a neighborhood where they did social work.

My main task was acting as moderator/facilitator for a group of neighbors to carry out small projects to improve their living conditions. I volunteered there for almost two years.

I learned a lot about working with groups of people, leadership, and communication. It was a fantastic experience.

• Since you’ve had success as an author, you’ve been able to travel overseas. Can you tell us a little about your travels? Where was your favorite place?

My favorite place so far has been Toronto, Canada.

I loved the cleanliness of the city, the kindness of the people, and the availability of healthy food options all around. It seems like a very advanced city. The people I met there were super friendly and always willing to help.

• As a life-long porteño what Buenos Aires’ attractions do think visitor’s can’t miss seeing while visiting the city?

Two places I really like are the ‘Jardín Botánico’ and the ‘Jardín Japonés,’ both in Palermo.