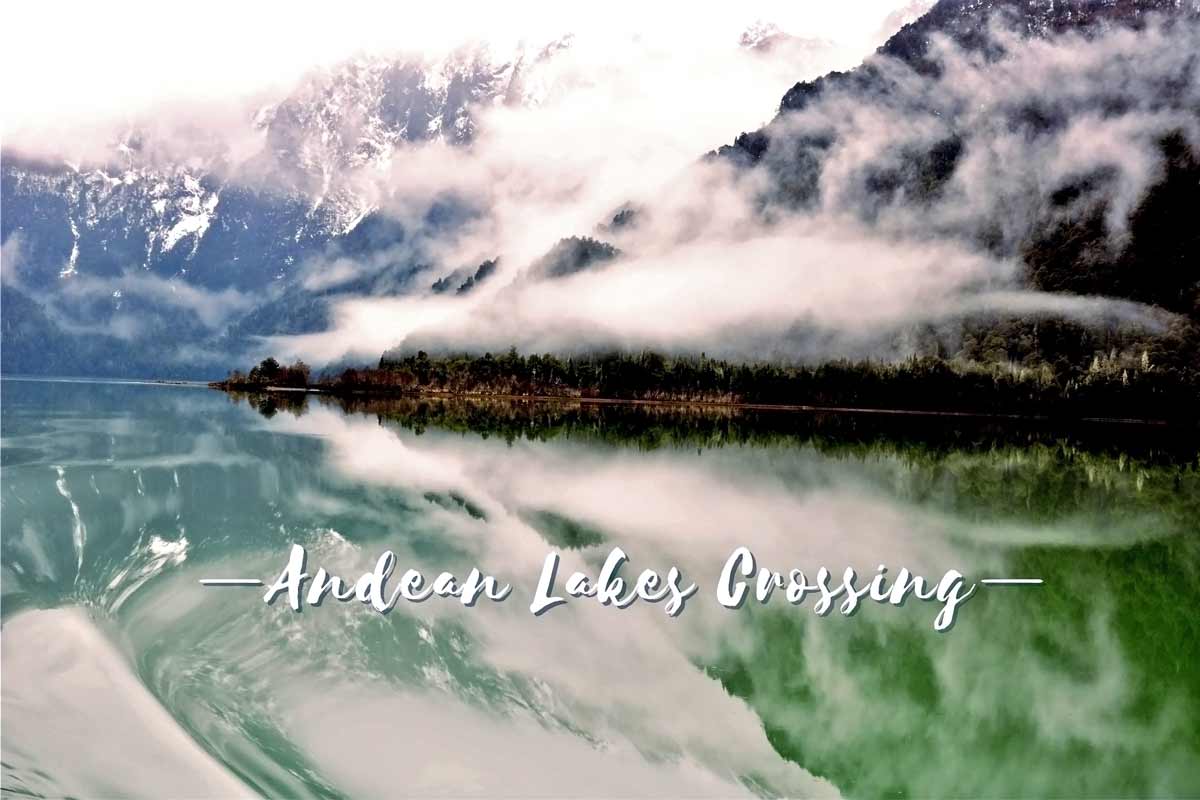 The ‘Cruce Andino’ Tour, is a 180km (112 miles) trip through the southern Andes mountain’s of Chile and Argentina.

The one-way trip Bariloche who want to cross the Andes into Chile, or around Puerto Varas in Chile and want to head to Argentina,

Travelers can trace the ancient trading route starting in Puerto Varas, Chile and ending in Bariloche, or vice versa.

If starting in Argentina, this is the route, with scenic highlights

This route through Patagonia’s Lake district is where more than 500 years ago native Puelche and Poya people crossed the Andes by foot and canoe to trade root vegetables, seeds and ceramic goods.

It’s believed to be the first trade route between the pacific coast and central territory.

Later, the Huilliche and Mapuche continued to use this route to trade livestock.

Today this classic Patagonia journey is retraced by visitors on the 11-hour Andean Lakes Crossing Tour from Puerto Varas to Bariloche (or the reverse: Bariloche -> Puerto Varas).

Although centuries have passed since this trade route was established, the area wasn’t settled until Carlos Wiederhold Piwonka, a German descendant born in Chile, crossed the Andes and set up a shop he named La Alemana (The German).

Immigrants — mostly from Austria, Germany, and Slovenia — began to settle in the area and thus was born ‘San Carlos’ in 1895, today the city of San Carlos de Bariloche.

Throughout the region, visitors see the Alpine-style architecture typical of Patagonia dotting the landscape.

After the first world war, the journey was developed into a commercial tourism route by Ricardo Roth Schütz, an Argentine born to Swiss parents.

Today, people from all over the world visit this area, captivated by its virgin nature that has remained largely unspoiled over the centuries.

The Andes are the longest mountain range in the world

They stretch 4,400 miles along the western coast of South America from Venezuela to the southern tip of the Argentina territory.

An average elevation of 3,962 meters above sea level, these majestic peaks also make up the second highest mountains in the world. Only the Himalayas are higher.

The Trip: Puerta Varas to Bariloche

Starting in Chile, the tour departs from Puerto Varas at 8 a.m.

It begins with an hour-long drive around Llanquihue Lake, and through the Llanquihue Nature Reserve.

During this leg of the trip you will be able to see the Calbuco Volcano, one of Chile’s most active on the right-hand side of the road, surrounded by the Valdivian jungle, a temperate rain forest.

Among the beautiful foliage in this rainy micro-climate is the Pipilvoqui, a climbing vine, that only grows natively in this region.

The Arrayán, or Chilean Myrtle, is also unique to this ecosystem and dominates this area of the Quetrihué Peninsula.

The endangered Arrayán tree sheds its bark and features a distinctive red-colored trunk.

Some specimens of the Arrayán in this pristine area of Patagonia are 650 years old.

The ash cloud of the Puyehue volcanic eruption in 2011 severely affected the trees here, but if the area remains unexploited they should repopulate in the rich volcanic soil.

After approximately 50 kilometers, the tour arrives in Petrohué to visit the Saltos de Petrohué (Petrohué waterfalls) crossing a short pathway to walk along the Petrohué river.

The group then boards the first catamaran to navigate the calm Lake, Todos los Santos.

On clear days, there are amazing views of the snow-capped Osorno volcano, Puntiagudo Hill and Mount Tronador, with its nine glaciers glistening on the summit.

This first boat ride last for one hour and 45 minutes, and is the longest of the trip.

Once in Peulla it’s time for lunch and coffee surrounded by the immensity of the Valdivian jungle at the Natura Hotel, the only lunch option in this remote area.

Other activities at this four-hour stop in Peulla are canopying, horse riding and hiking.

Visitors have the option to stay overnight at the homey four-star Natural Hotel Patagonia and continue the journey the following morning.

Whether staying overnight or not, the tour guides will provide the immigration form that required for the Chilean Customs Office.

Get your passport ready, eat your snacks and ditch your shank before going through customs — fresh groceries, dried fruit, and weapons are not permitted across the border.

From Peulla, a bus takes visitors through the Perez Rosales National Park for approximately two hours.

On this stretch, the guides highlight the various bird and plant species of the 1,000 year-old Valdivian Jungle as well as the bordering points between Chile and Argentina in various stops.

Puerto Frías is the formal entry point to Argentina.

In Puerto Frías visitors can see a replica of the 1939 Norton 500cc motorcycle that Ernesto Che Guevara used to cross the Andes and nicknamed the ‘La Poderosa,’ or ‘The Mighty One.’

Frías Lake is an emerald lake that gets its crystalline greenish color from the minerals that run off the melting glaciers. This smaller lake is only five square kilometers and its navigation takes around 15 minutes.

If the sky is clear, this portion of the trip provides one of the best views of the Mount Tronador, the highest mountain in Nahuel Huapi National Park, at 3,491 meters above the sea level.

In winter, shallow parts of the lake freeze into a turquoise color that lends itself to amazing landscape photos.

Once the boat arrives to Puerto Alegre, there is a quick bus ride to reach picturesque Puerto Blest. In Port Blest there is time for a brief visit to the spectacular Hotel Puerto Blest, a lodge dating to 1904.

The hotel was modernized and reopened in 2015 after being cosed for many years.

Those who chose to spend the night in Peulla, will arrive at Blest port around midday.

This allows time for an optional two kilometer walk to visit the Cántaros Waterfall.

If doing the one-day tour, there isn’t time for this trek due to time constraints to get the boat to Puerto Pañuelo.

Nahuel Huapi Lake, located in the national park of the same name reaches across 557 square kilometers — the equivalent of three times the surface area of Buenos Aires.

The greatest depth measured is 464 meters, in the Blest arm of the lake.

Centinela Island is where Francisco Pascasio Moreno, a well-known Argentine explorer and scientist and is buried with his family.

Moreno was a judge in the border negotiation between Chile and Argentina and declared that the frontier between the two countries should be based on the highest mountains instead of an aquatic boundary.

Since this decision was formalized in 1902, the border between Argentina and Chile is divided by the highest mountains on the Argentinean side of the range, such as Mount Tronador.

For his efforts, the national government donated a huge mass of land to Moreno, which he in turn donated back to the country upon his death.

Today this land is part of the territory of Nahuel Huapi National Park.

With this, Moreno became the creator of Argentina’s national parks, making Argentina the third country in the Americas (after the United States and Canada) to have a national park system.

In Puerto Pañuelo (Handkerchief Harbor) resides the luxurious and emblematic Llao Llao Hotel, a circa 1938 hotel that is a traditional destination for visiting VIP’s, such as the Obama family in 2015 and the 2018 G-20 summit.

The Llao Llao sits on a steep incline over the dramatic Punilla valley.

This stop offers a good chance to take some pictures before the last bus stretch to downtown Bariloche, 25 kilometers from Puerto Pañuelo.

In Bariloche visitors are dropped at their respective hotels.

Whether done in one day or two, the Andean Lakes Crossing Tour is an extraordinary experience for nature lovers through unforgettable Patagonian landscapes.

Note: This tour can be done either way: departing from Bariloche or Puerto Varas.

To arrange the trip from Bariloche, extend it into a two-day trip, or to get a specialized itinerary for your entire Patagonia vacation, please get in touch via our contact form with ‘Andean Lakes’ in the subject line.