Elaborately costumed human mannequins are ubiquitous around San Telmo when the weekly San Telmo Street Fair takes place. Among the favorites are both of the genteel Carlos Gardels — one works on Humberto Primo and the other works along Defensa.

You also may see the ‘windswept office workers,’ who can also sometimes be seen on Florida Street as well as one of the ‘mirror men.’ 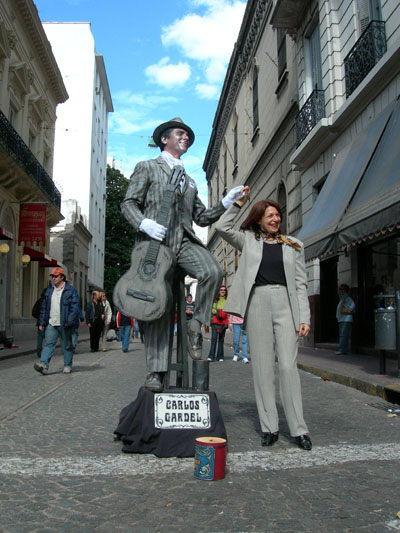 Mimes, clowns, scantily-clad drag queens and people who want to be tipped for just being who they are — they come out of the woodwork in San Telmo on Sundays. Especially prevalent are the ‘tango personalities’ who regularly make the rounds and sometimes sign autographs — whether you want one of not. 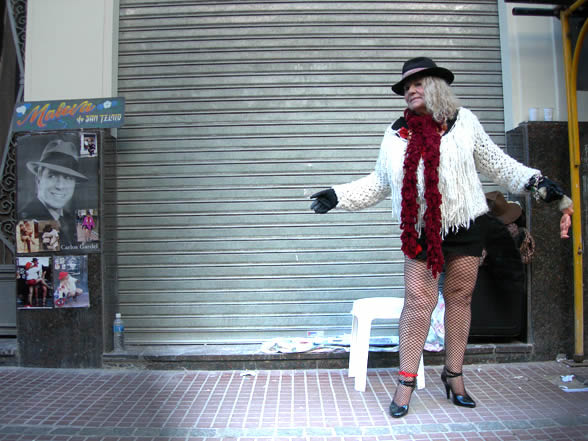 ‘Tango Dancer’ Maleva takes tango back to its early 19th-century roots, with her fishnet stockings and heavy make-up. She doesn’t really dance tango as much as she prances around in her own little tango fantasy. She hasn’t been around lately so she might have taken her show indoors. 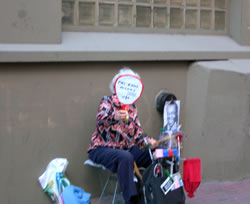 Halfway down the block from the plaza on Defensa Street is the woman everyone calls the ‘crazy drum lady,’ and she doesn’t seem to care one bit.

It’s difficult not to feel endeared to an elderly woman who supplements her pension playing a makeshift drum set and cracking jokes on the street. It doesn’t matter if you’re the queen of England though– if you want a picture you better give her U.S.-grade cash money beforehand or else you’ll receive an obscene gesture. She’s old, cranky and living on a fixed income. She can do whatever the hell she wants! 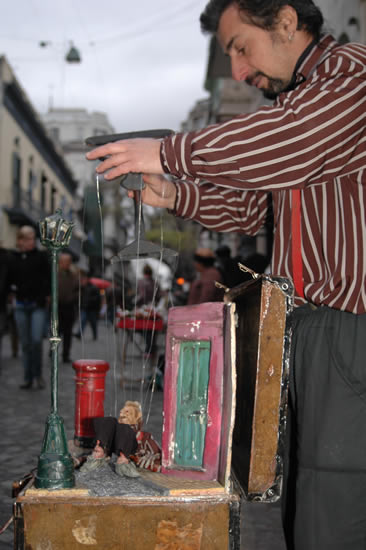 Puppetry is an art that is taken to its highest level in Buenos Aires. Delighted crowds always stop to cackle at the antics of ‘The Drunken Puppet,’ who stumbles around a miniature street corner made out of a suitcase — and looks curiously like his puppeteer.