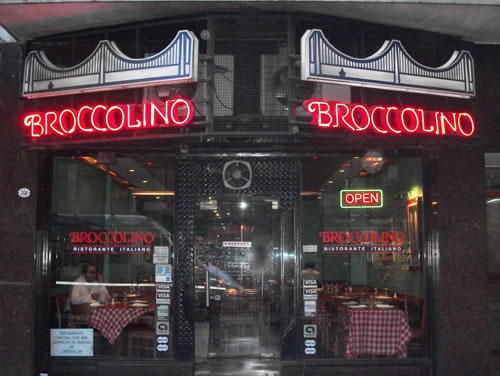 If you’re downtown, and have a craving for Italian (albeit with a pinch of New York City), go no further than Broccolino.

This large but intimate-feeling restaurant straddles the corner of Esmeralda and Cordoba streets with its three big, green dining rooms. Don’t be alarmed omnivores — the title doesn’t indicate a vegetarian joint, it’s derived from the way Italian-Americans once pronounced the name of a certain New York borough.

Walking in to one of three entrances (one smoking, two non-) you will be quickly attended, and given a choice of whichever free table you desire. You may decide to sit in front of the giant mural of the Brooklyn Bridge, or perhaps the signed Beatles portrait, or the framed news stories opposite about the Rolling Stone’s visit here for an extravagant dinner back in ’98.

Momentarily you will be served by one of Broccolino’s immaculate, multilingual waiters. Aside from Spanish, these guys speak fluent English, Italian, Portuguese, and God-knows what else. And if you get Nicolas, he will provide you with dubious one-liners all night, free of charge.

A glance at the menu reveals the daily specials — Thursday’s Osso Buco is debaucherous, but divine. The most requested dish here is the Tagliatelle with Bolognese sauce. The calamari dishes are excellent appetizers to share, the salads and meats are quite nice, but with the pastas you simply cannot go wrong. Just about every restaurant in town has pasta dishes, but Broccolino serves up some of the best. Order a nice Malbec to sip on while you make your selection.

Try the cannelloni instead of the lasagna, while the Putanesca, Dr. Zhivago and Amatriciana sauces are all superb and served with a generous portion of your pasta of choice. A favorite is the Maradó, which apparently was soccer star Diego Maradona’s choice while he was living in Naples. One look at the stocky little deity indicates that he knows how to eat well – so what else can we mere mortals do but follow his example, although we would suggest doing it with a little more moderation than Diego if you want to avoid multiple trips to rehab.

If you have room, share a chocolate volcano for dessert, and to help digest all that, an espresso coffee will be necessary. Prices in Broccolino are a bit pricier than your average cafe meal – but it’s worth spending a few extra pesos for such a feast every once or twice in a while.