As far as really big cities go, Buenos Aires is not particularly dangerous, although if you listen to the many residents of this port city or the excitable tabloid media you may come to believe it’s something akin to downtown Baghdad. 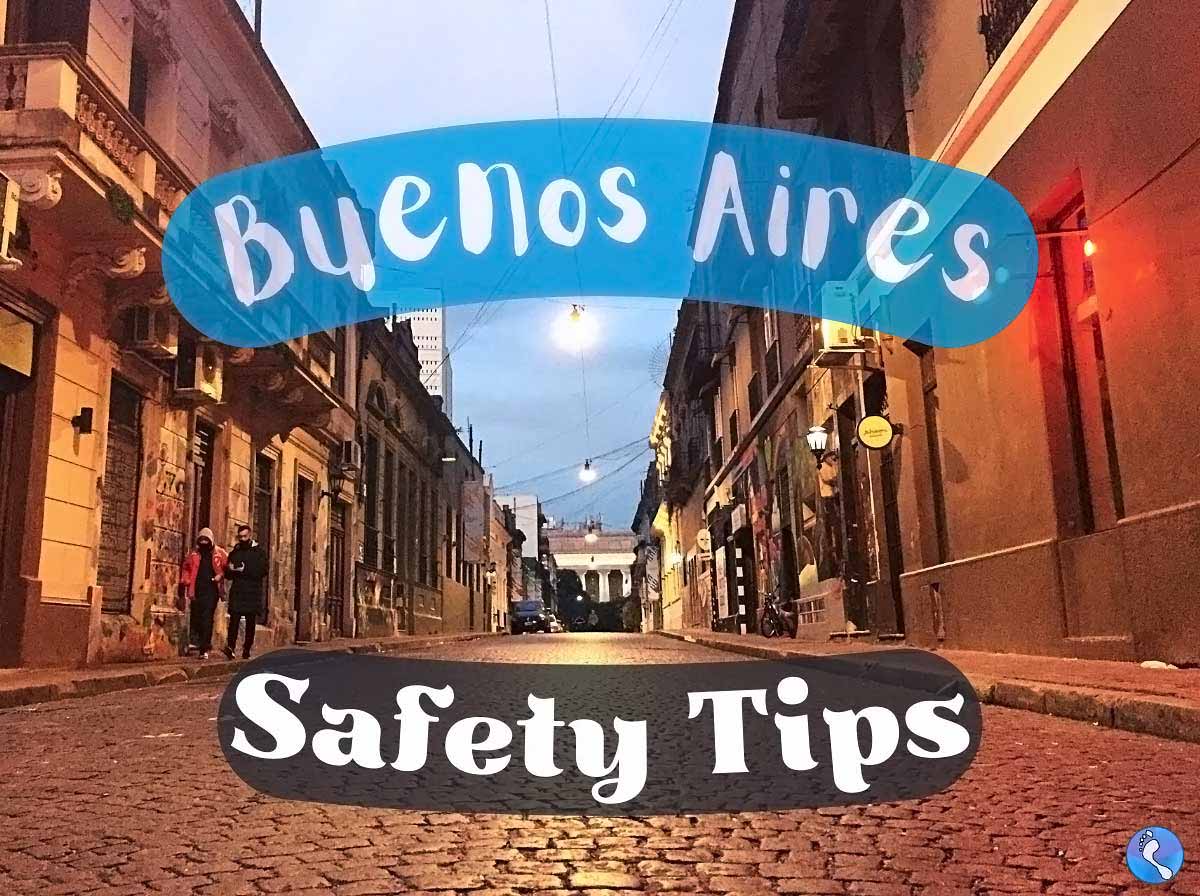 Safety in Buenos Aires appears pretty good according to the Crime Index Rate.

This year Buenos Aires is rated at number 53, between Gosford, Australia and Atlanta Georgia.

Twelve U.S. cities including Detroit, Albuquerque, and Saint Louis are considered more dangerous than Buenos Aires according to the data.

However the statistics are likely skewed by the fact that many people in Argentina don’t bother to report thefts to the police because they consider it a waste of time.

Petty theft is a problem in Buenos Aires but violent crime is less common than in many U.S. cities.

Incidents of armed robbery have increased in the last few years, such as those involving the ‘taxi mafia’ at Ezeiza airport but the chances are slim that a short-term visitor will be a victim.

The longer you stay in Buenos Aires, the more likely it is you will be a victim of crime, although that can also be offset as one becomes familiar with the city and blends in more.

Tourists are a target for crimes of opportunity and that’s why it is important to be aware and become familiar with some of the common scams that are run on international visitors.

Most Common Crimes in Buenos Aires

The most common crime in Buenos Aires and around the country is petty theft, specifically pick-pocketing.

In Buenos Aires, pick-pocketing hot spots are Florida Street, around Plaza de Mayo, around the Retiro train station, busy streets of Palermo, on the subway and buses and sidewalk dining establishments.

Anywhere where there are crowds of people on the street, jostling from the crowd could be someone trying to reach into your bag or even slice it open with a razor.

Pickpocketing is the reason that visitors will notice locals carrying their backpacks in front of them like kangaroos.

One thing to be aware of is that the pick-pocketers are often women and are not always adults.

Although it is seen less in recent years, sometimes children are sent out by their parents to beg or to pose as beggars in order to pickpocket.

The second most common crime is snatch and grab robbery — usually of cellphones but also purses and fancy watches.

Often the victim is using their phone on the street or on public transportation and someone comes up and grabs it and runs.

It happens quick, and usually the perpetrators are able to run through traffic or crowded areas to get away. The obvious solution is to not use a phone much in public — visitors will notice that many travelers on the subway and buses simply read good old-fashioned books.

As mentioned on the post Safety For Female Travelers and What to Pack post, we recommend an over-the-shoulder type bag instead of a purse for women.

The most common and fastest growing crime in Buenos Aires and Argentina overall is ‘motochorro‘ robberies.

Be aware if you see two men on a motorcycle slowing down, or riding near the sidewalk headed toward you.

In the following video you can see a tourist fight off a ‘motochorro’ after he jumped off the motorcycle to try and rob the traveler’s backpack.

While the usual advice is to not resist and turn over whatever is asked for, there are lots of stories in Buenos Aires of adrenaline-filled travelers fending off robberies.

While Argentina’s penal system is often accused of being soft on crime by residents, people do get jail time for injuring others in the course of a robbery, so those who cooperate and hand over their items usually don’t get hurt.

The best thing you can do to ward off crime in Buenos Aires is to be aware of the dangers that exist, as you would anywhere, and act accordingly.

Travelers in Argentina usually realize that they need to be careful, but when you’re having fun it’s easy to forget to pay attention.

When possible, try not to look like a foreigner.

Obviously this is not always the easiest thing for a foreigner to do, but there are certain steps you can take.

In a country where approximately 37% of the population lives below the poverty line, and the local currency is valued at much less that US dollar or Euros, it is a sad fact that certain people view foreigners as nothing more than a potential source of money (kind of like walking ATMs with sunburns).

The good news is that Argentina is unlike many other countries in South America, in that the population is a bit of a melting pot.

This means that if you are tall, blonde and blue eyed, or Asian, or whatever, you could still pass as a local here, or as someone from a neighboring country — not a ‘neo-colonist’ with wads full of cash.

Across the board, the chances that you will be a victim of crime depend more on your attire and conduct rather than just your physical appearance.

Check out what the locals are wearing and try to imitate them to a certain extent.

When you are walking around the city, for example, it may not be necessary to wear your Machu Pichu hiking gear and floppy hat when casual clothes and comfortable shoes would probably suffice.

As noted, in our post ‘Italian Echo in Argentina‘ Argentines tend to look toward Europe in fashion trends and dress in a more subdued style than in other Latin American countries.

If wandering into unfamiliar neighborhoods, try not to talk louder than is necessary in public, as that is another way of drawing attention to yourself.

Resist the urge to shout at your wife in English that she is walking in the wrong direction when she is half a block in front of you.

Avoid looking lost. If you are lost, it’s a bit hard to pretend otherwise, but it’s best to advertise it as little as possible.

Standing on a street corner staring open-mouthed at an Iphone is a none-too-subtle hint to potential thieves that you are disoriented.

You can always head into a quiet bar for a coffee to check out your google map.

If you get a sketchy feeling you can also just pop into a ‘kiosko’ (convenience store) which are on pretty much every block, and ask for directions.

Carry as few valuables with you as possible, and pay attention!

If you only have one small bag with your camera, money and credit cards, hold it close to your body when walking, hugged to your belly while on crowded public transport, and on your lap or looped around the chair when you are sitting in a cafe or restaurant (especially outdoors).

Now that Argentina’s mythical ‘Blue Dollar‘ is back, foreigners are more likely to be carrying lots of cash, even if it’s just picking up a blue dollar money transfer.

Considering the cash on hand, it may not be a bad idea to get a nifty money belt that holds money, credit cards and passport.

The two items that are most appealing to Buenos Aires’ street criminals are professional cameras and cell phones — as mentioned above, they are often snatched out of their owner’s hands in the middle of the street, or even while sitting by an open window on a bus by someone running past, or riding by on a bike or motorcycle.

Pickpockets are especially adept at taking advantage of crowded public places – a moment of inattention and your wallet could vanish.

Barbara Bush (George W.’s daughter) kindly demonstrated this fact for us in 2007 when she somehow managed to have her bag snatched at a humble San Telmo restaurant, despite being accompanied by a posse of secret-service agents.

(Apart from not keeping an eye on her bag, we can only allege she was also living up to her family name by breaking our next rule…)

Don’t get too inebriated! All of the points above are easier to comply with if you are sober.

Buenos Aires is a great city in which to party into the wee hours of the morning, but if you are going to do so (and it would be a shame to miss the nightlife) keep your wits about you and don’t carry too many valuables.

The cash you need for the evening’s festivities, your phone, a piece of paper with your the address of where you’re staying written on it (to show the taxi driver if you are too ‘tired and emotional’ to remember or lose your phone),

Keep your bank/credit card kept in a separate place from your cash just to be cautious. Once you say goodbye for the night make sure single friends arrive safely and let them know you got home safe and sound as well.

All of these points seem obvious, and apply to most places you travel to in the world, but are still often forgotten among all the merriment of being in Buenos Aires, one of the world’s most exciting cities.

Outside of the country’s capital, provincial violent crime rates are low. One exception is Rosario which has some narco-trafficking activity.

Most visitors to Buenos Aires and the rest of Argentina never experience any kind of problem, but it pays to be just a tad paranoid, or at least remain cautious and attentive at all times.

• Be aware
• Only carry what you need for the day on you
• Don’t walk around with a DSLR camera around your neck in the city
• Don’t wear a nice watch such as a Rolex
• Avoid looking lost and staring at your phone on the street
• Watch your bag closely on public transport and in restaurants
• Have a blast but don’t get so wasted that someone could take advantage of you!
• Be aware of common street scams. (➡See article)

What to do if You Are a Victim of a Crime in Buenos Aires?

If you are a victim of a crime in Buenos Aires you can seek help from any police officer or call the national emergency number of 911 for an emergency or call 101 for a 24-hour English helpline.

If an ambulance or medical care is needed there is no charge, although let them know if you have travel safety insurance, as you may be taken to a private hospital.

The Buenos Aires tourist police are a special police department specifically designed to help visitors who fall victim to crime in Buenos Aires.

They can offer help interpreting in English, Portuguese, French, Ukrainian and Japanese.

See here for a list of locations of all police stations in Buenos Aires.