The Buenos Aires’ Gay Pride parade is the largest rainbow-colored street party of the year. The parade takes place every year on the first or second Saturday in November. 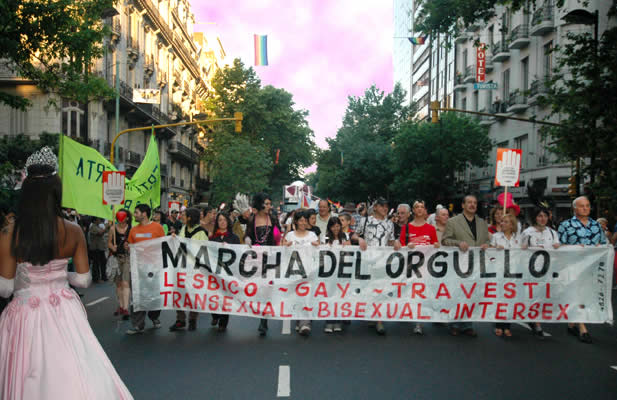 The party begins at 11:00 a.m. in the Plaza de Mayo with music, dancing and plenty of photos ops for the city’s popular gay figures and most outrageous transvestites.

The parade has grown into a huge celebration from its humble beginnings in 1991.

Due to a conflict with city officials, 2014 almost became the first year the party would not take place. It did prevail and has grown ever since, although some locals object that the Pride March has become too politicized to include topics and groups that have little to do with Gay Pride.

“In the first year 17 people participated in the parade, in the second year there were 50 and in the third year we had 300,” says Rodolfo Peralta, representative of the Argentine Federation of Lesbians, Gays, Bisexuals and Trans (Federación Argentina de Lesbianas Gays Bisexuales y Trans).

“In the fourth year, the year I began marching, we had 600 people.”

In the last decade plus, the Buenos Aires Gay Pride Parade has grown to massive proportions. Starting in 2009, the parade attendance jumped, drawing an estimated 40,000-50,000 participants.

In 2010 — the first year revelers were able to celebrate Argentina’s legalization of gay marriage the crowd was even bigger.

“We’re a lot of people. We have a lot to celebrate this year — not the least of which is the legalization of gay marriage,” said Peralta at the time.

Among the groups that participate are the Argentine Association of Transvestites and Transsexuals, the ‘Peronist Fags’(Putos Peronistas), The Sisters of Perpetual Indulgence, and the local chapter of Parents, Families and Friends of Lesbians and Gays (PFLAG).

2021 — Celebrating passage of the ‘Non-Binary’ Law

This year, Buenos Aires Pride participants have another reason to celebrate. Argentina joined Canada and Australia in permitting individuals to mark ‘non-binary’ on official documents.

Estanislao Fernández, son of Argentine President Alberto Fernández (who goes by Dyhzy) was one of the first to take advantage of the law, He registered so that his official state documents and passport are marked with ‘x’ for gender.

Once everyone gathers, the parade begins at 4 p.m. from Plaza de Mayo and slowly blares its way up 11 blocks of Avenida de Mayo to the Plaza Congreso.

The celebration ends with live music in Plaza Congreso, often headlined by notable local pop acts such as Leo Garcia and Miranda.

In typical Buenos Aires’ fashion, expect the party to run until sunrise.

Celebrations continue all week with art shows, cinema festivals and events in gay clubs all over town, particularly in nearby San Telmo.

The event is just one part of Gay Pride week in Buenos Aires in which there are LGBTIQ-themed conferences, speakers, and parties all over town.