Casa Felix is one of those special places that you read about as a child — a secret garden, a cloud at the end of a giant beanstalk, or a palace under the sea. You aren’t sure it actually exists until you go there. That’s because this intimate dining venue is a Puerta Cerrada, a ‘closed-door’ (underground) restaurant that takes place thrice weekly in a private home. Surreptitious supper clubs continue to be en vogue in Buenos Aires, and Casa Felix — a Travel and Leisure top ten— is an enduring, not-so-secret stand-out among a handful of others that have sprouted up throughout the port city.

The experience is hard to describe with mere adjectives: phenomenal, absolutely exceptional and ‘one-of-a-kind’ are a few.

It’s a cozy family get-together of worldly diners under the stars, seated in an open patio draped with colorful flags. It’s a basket of warm bread with a white bean and red bell pepper spread. It’s a Brazilian passion fruit, white wine sangria in your hand on a cool autumn evening. It’s a fresh mint intermezzo (pallet cleanser) between bites of oyster mushrooms with arugula flowers drizzling with chili-infused oil and coconut and lavender cream pie.

Chef Diego Felix began cooking in his late twenties at a collective in San Francisco. After a few months of cooking for his housemates, he started to notice the numbers increasing from 20 people to 100. “Everybody was bringing their friends over to eat! Which is fine, but I told them to start bringing food too, and then I cooked it for everyone.”

Felix, a rare lifelong vegetarian in this country of carnivores, returned to his native Buenos Aires after working at San Francisco’s vegan temple Millennium and opened up Casa Felix with his beautiful wife, Sanra Ritten three years ago.

When Ritten and Felix first moved to South America they were traveling together as a photographer and journalist. “We set out on this very romantic ideal, and we started talking about starting a restaurant together. And when we opened up our doors to friends and friends of friends we realized that we could make a living doing this. It’s so crazy when you start doing what you say you’re going to do.” 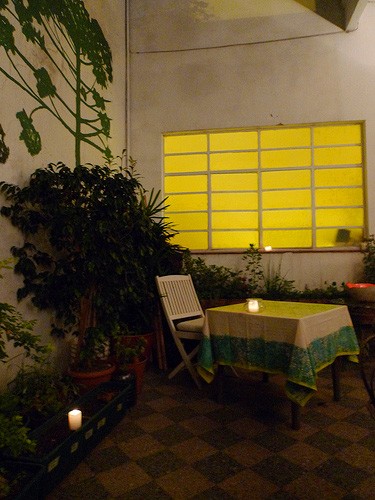 The five-course feast begins around 10 p.m. Chef Diego Felix, aided by Ritten and various friends from San Francisco, serve a set menu ( which can be adjusted to accommodate dietary restrictions). Expect deliciousness like empanadas filled with mushrooms and pumpkin seeds; apple-mint granita (sorbet-like dessert), and a quinoa-flour tart topped with oven-dried berries.

It’s important to call or e-mail well in advance for a reservation at this exclusive establishment. After you are confirmed, Casa Felix will e-mail you with their address in the Chacarita neighborhood of Buenos Aires, asking you to arrive at 9:30 p.m. Guests, usually about a dozen, mingle in the backyard garden, sipping sangria and breathing in aromatic herbs like Peperina, a type of mint that grows in the Andes mountains and cedrón, a lemon-scented shrub from the Pampas.

Casa Felix is so popular with American visitors that the couple goes on a cooking tour every summer, cooking for private parties in major American cities. Whether Felix is in New York City or Buenos Aires, he aims to cook as locally as possible in each city. The only thing he packs with him on his tours is a bottle of chimichurri, an oil and vinegar-based spiced sauce.