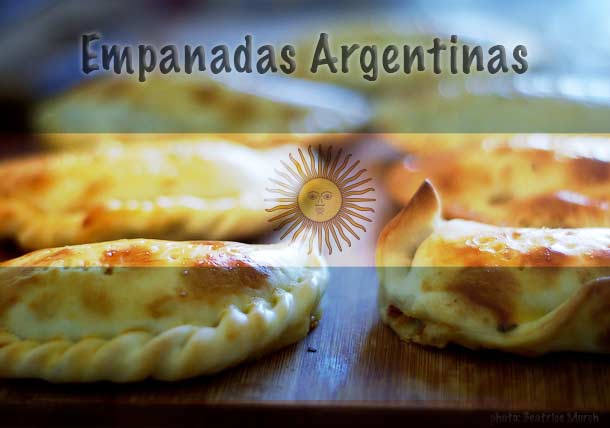 These little pastry parcels are sold almost everywhere and eaten by almost everybody, save the most loyal dieters.

Empanadas are chowed down during short lunch breaks, taken home after work for a quick dinner, delivered by reckless scooter riders late into the night, and prepared lovingly in kitchens all over the country.

In Argentina a fútbol game isn’t complete without beer and juicy empanadas.

Although originating from Spain (and before that, India in the form of samosas) today empanadas are more ubiquitous in Argentina that the homeland.

Argentines can’t live without their tasty turnovers, and many foreign visitors soon find themselves addicted as well.

Argentinean empanadas are made with a flour dough. They are filled with beef, chicken, ham and cheese, sweet corn or swiss chard and cheese before being sealed into a turnover.

Empanada stands or speciality restaurants will usually offer the choice of oven-baked or fried empanadas.

In empanada specialty houses, the repulgue, or pattern of the pastry fold, helps to indicate the filling of each empanada.

A chart will often be provided to guide the diner. Here is a guide to the most common varieties of empanadas served up in Argentina:

Argentina is mostly a Catholic country so many people avoid meat during Easter week, especially Good Friday and Easter.

There are two types of empanadas made with fish that are popular on Easter.

Empandas de Vigilia are extra large puffy holiday empanadas.They are prepared in a similar manner to meat empanadas but filled with a fish, such as tuna and may include Swiss chard.

Empanadas Gallegas or Galician empanadas are a little more elaborate with with a sautéed onion, tomato and red pepper and egg. Eaten as an appetizer, or main course, it is typically made into a pie with homemade dough surrounding a tuna filling.

On the Atlantic coast, it’s more common to use another fish or even a seafood mixture. The juicy seafood empanadas made with freshly caught fish shouldn’t be missed if visiting the Patagonia coast.

Where to Travel for the Best Argentina Empanadas

Every province in Argentina has their own style of empanada, but it is widely agreed that the Noroeste, or northwest provinces have Argentina’s best empanadas.

If you travel to the Andean region of the country, where empanadas are a speciality, it’s hard to resist trying them at every pit stop.

Salta’s empanadas are probably the most famous country-wide, so native Salteños sell empanadas throughout the country.

Empanadas Salteñas are the smallest empanadas, but what they lack in size they make up for in flavor. The juicy filling contains a minced meat cooked in a large helping of lard with onion, green onions, bell pepper, ground chili, boiled egg and potatoes cooked in a clay oven, which adds to the homemade flavor. Black or green olives are optional.

In neighboring Bolivia, empanadas are called ‘Salteñas,’ and are a staple snack food. They were brought there by activist and native Salteña, Juana Manuela Gorrit. Exiled to Bolivia in the early 19th century, Gorrit sold her homegrown snack to make a living. (She later became Bolivia’s First Lady, which happened to be great marketing for her snack.)

Empanadas from Jujuy are similar to those of Salta, but they are a little spicier and often contain peas in meat filling.

Travelers who get off the beaten track and up into the hills will find empanadas made with llama meat, which taste like beef, but is leaner.

Tucumán, in the middle of the northwest provinces, is famous for its juicy empanadas.

This humble province takes their empanadas very seriously: every September since 1979 they have hosted the National Empanada Festival in Santiago del Estero.

Typical empanadas Tucumanas tend to have less vegetable ingredients. The filling is made of meat, sautéed onion, garlic, cumin, pepper and paprika. They are larger than the Salta variety, made with lard and also cooked in a clay oven.

One popular variety in Tucamán is made with mondongo, or tripe, but beef and chicken are just as common.

Those with big appetites will want to try empanadas from Santiago del Estero. These empandas tend to be the largest in the country.

Empanadas in Santiago del Estero tend to have the most tender meat, as its boiled before it is sautéed in beef fat. The meat is spiced with paprika, cumin and oregano. Also cooked in a clay oven.

La Rioja’s empanadas got a dash of Arabic flair thanks to many Levantine immigrants here.

Catamarca doesn’t get much as much credit for their empanadas compared to the neighboring provinces. The medium-sized empanadas from Catamarca are similar to those from Santiago del Estero, although you may find goat meat instead of beef.

Other ingredients are potato, onion, green onions, ground chili, paprika, and a diced hard-boiled egg simmered with laurel. Olives and raisons are optional, so they depend on the cook in Catamarca.

Good empanadas are not hard to come by anywhere in Argentina. Here is a list of some the most famed empanada places in Buenos Aires

• El Hornero For typical empanadas salteñas, head over to the San Telmo Market for a beer and some empanadas. They have traditional empanadas cooked in a traditional large clay oven and more unique varieties such as Cantimpalo Y Queso (chorizo & cheese).

• Cumaná in the heart of the Recoleta neighborhood is a popular restaurant with Andean cuisine that has northwestern style empanadas.

A special evening with other foodies, a gastronomic experience that includes wine tasting, empanada cooking class and delicious Argentine meat.

Available everyday except Sunday and Monday

A special evening with other foodies, a gastronomic experience that includes wine tasting, empanada cooking class and delicious Argentine meat.

Available everyday except Sunday and Monday

• La Morada is a porteño favorite for empanadas, with two locations — its original downtown/Monserrat location and a second locale in Barrio Norte. It’s also popular for delivery.

• Pizza Güerrin is famous for their pizza, but the lively hole-in-the-wall also has typical, savory empanadas.
Av. Corrientes 1368
Downtown
Tel: 4371-8141

•Ña Serapia is a typical bodegón across from Plaza Las Heras famous for its flaky empanadas. Favorites include the ‘La Porteña’ with raisins and olives, and the ‘Salteña’ style empanada.

•La Cuartito in Tribunales, the judicial district of the city,is another place famed for its pizza but if stopping by, their empanadas are worth trying as an appetizer at least.

This humble locale has Venezualan-style empanadas filled with ingredients such as black beans, plantain and cheese and they are accompanied by an ingredient that can be quite elusive in Argentina: hot sauce (it’s a miracle!) and guasacaca (avocado dressing).

• La Cocina offers Catamarca-style empanadas, which can be hard to find in Buenos Aires. A house favorite is the ‘pickachu,’ a filling of cheese, onions and a ‘spicy’ sauce. Their ham and cheese empanadas are made with ricotta cheese in place of the usual soft cheese.

El Sanjuanino is rustic favorite popular with families that has also received accolades in the New York Times. They specialize in San Juan-style empanadas and diners are treated to live Argentine folkloric music.

• The Stand is an American-Argentina fusion restaurant new on the empanada scene, located in the neighborhood of Almagro. Some of their unusual empanada offerings include pepperoni and cheese, potato or curry chicken, lamb curry, and bacon cheese burger. If those sound weird to your Argentine friends, have them drink a couple of the delicious pints to loosen their rigid palates.

Empanadas aren’t usually vegetarian, and certainly not vegan as the dough is made with lard or butter, but they can be made vegan or vegetarian at home quite easily.

It’s also fun to experiment with ingredients such as lentils and eggplant.

De Rosa Pizzería is one of few places that can accommodate vegetarians and vegans on the hunt for empanadas they can eat. De Rosa offers lard -free empanadas with fillings such as polenta, acelga (chard), and onion and peppers.

→ Take an expedition to taste delicious juicy empanadas at the Feria de Mataderos, that takes place on Sundays just outside Buenos Aires.

→ Learn how to make empanadas yourself on one of our Buenos Aires Food Tours.