Galería Güemes is another art nouveau jewel on downtown’s Florida Street, but you wouldn’t know it from glancing at it street side. After a 1971 fire caused serious damage to the exterior of the 1915 building it was modernized and rebuilt with a rather unfortunate glass façade, but the first floor retains the beautiful interior details including a stained glass central dome, granite walls, arched ceilings and detailed ironwork. 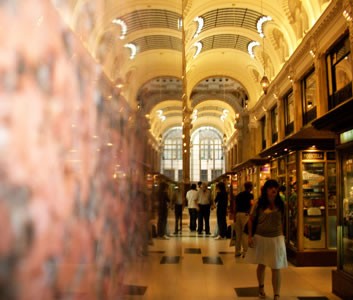 …”The Güemes arcade is ambiguous territory where, for a long time now, I’ve gone to shake off my childhood as if it were a used suit.

Since the year 1928, the Güemes arcade was a treasure cavern in which the world of sin and mint lozenges deliciously intermingled, where they shouted out the headlines of the evening newspaper with crimes on all the pages and lights burned in the basement gallery, where they showed forbidden realistic films. …

I remember most of all the smells and sounds, something akin to expectation and anxiety, and the little store where one could purchase magazines with naked women and ads for fake manicurists and I was already sensitive to that false sky of stucco and dirty skylights, to that artificial night that ignored the stupidity of the day and of the sun just outside.”

Today, Galería Güemes is family friendly once again with 24 PG-rated stores to peruse including a chocolate shop, leatherware outlet and a wine cellar. On the second floor you’ll find Granix, one of Buenos Aires’ oldest vegetarian restaurants. In the building’s lovely basement auditorium, the Astor Piazzolla Theatre, tango great Carlos Gardel performed in 1917. Today it hosts one of the most celebrated Las Vegas-style tango dinner shows in the city.

In April 2010, Galería Güemes’s 14th floor lookout point was reopened to the public after many years in disrepair. Throughout Argentina’s 1920s heyday this was the highest man-made point in the country. The public came here to get sweeping 360-degree views of the city with the aid of a huge coin-operated binocular. Today the views are certainly more urban but on a very clear day you can see the coast of Uruguay with the aid of binoculars.