← cont. from: Florida Street—Galería Güemes through the Years 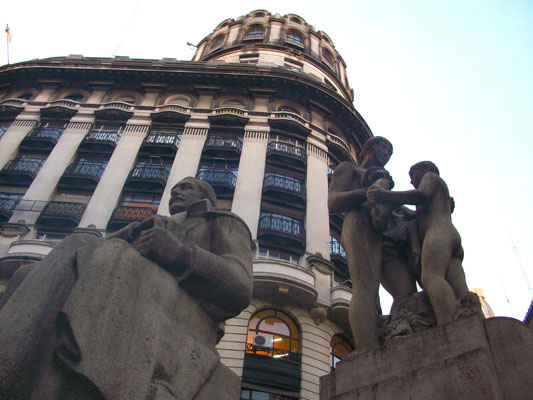 At the point where Florida Street meets Diagonal Norte is Plazoleta Ciriaco Ortiz, a small triangular plaza overlooked by a series of some of Buenos Aires’ most impressive buildings. Here Buenos Aires’ early 19th century desire to emulate the urban design of Paris, with harmonious architecture and long, wide avenues connecting important sites is fully evident.

Diagonal Norte, also called Avenue Roque Sáenz Peña, is symbolically meant to connect the country’s executive power from the Casa Rosada (Pink House) in Plaza de Mayo with the judicial branch at the Supreme Court’s ‘Palace of Justice.’ From here it is visually a straight shot to both The Obelisk and Plaza de Mayo.

Thanks to strict zoning laws during the area’s construction, all the buildings along Roque Sáenz Peña Avenue are esthetically proportional, reaching exactly 220-feet (67.5 meters) in height, the same stature as The Obelisk.  Look up on this photogenic and important intersection and you’ll see that cupolas top every building.

The centerpiece of the plaza is the 1936 art-deco style monument in honor of ex-president Roque Sáenz Peña, venerated for instating the secret, obligatory and universal vote for all men in Argentina, allowing for democratic elections. The sculpture was made in Paris from one single piece of stone by Argentine, José Fioriavanti. The monument incorporates the figure of a man soberly seated with a book in his lap to represent the Statesman. Facing the plaza the monument portrays a man and woman holding a small child, to represent Argentina’s acceptance of immigrants. The final part of the monument shows a man with a law tablet and a sword to represent the obligatory vote.