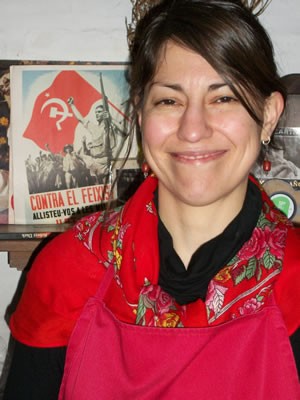 Q: When did you open your health food store and how did you do it?

I opened about six years ago. I received a small micro-loan from the city and was able to rent this place and start the business.

• How was the experience of getting the micro-loan from the city?

It’s a bit of a hassle. You have to do a lot of paperwork, so it took about a half a year to be approved. It is a bit of a pain but doing all that paperwork kind of serves as filter so that they end up giving loans to people who are really serious about what they’re doing.

• What made you decide to open a health food store?

I always ate natural foods myself. I also wanted to have my own thing— make my own hours and I didn’t want to have a boss!

I still work a lot and put pressure on myself to succeed, but it’s better than having someone breathing down your neck.

• Were you nervous about opening a health food store considering that the natural foods movement is in its infancy in Argentina?

I was fearful at first. The economy is not that stable, you can’t plan too much and also the rents in San Telmo can go up at anytime, they have little relation to the actual market. The customers are very loyal though —it’s everything else that is a bit wonky.

• What’s your opinion of the health food movement in Argentina?

People complain about the inflation of the beef prices, but if it were up to me, meat would get so expensive that people would stop buying it!

• Are you a vegetarian?

I was for 21 or 22 years and just this last year I started eating fish. Like once a month, I’ll eat some hake.

I figure if I’m personally capable of going fishing and killing a fish and cooking it up myself it’s okay. I don’t want it to be simply mercenary — the idea that someone else kills an animal for me to eat when I can’t kill a fly doesn’t sit well with me, but if it’s part of nature and the habitat, it makes more sense.

• Why did you decide to start eating fish?

I’m continuing my studies in philosophy at the University of Buenos Aires and I was a bit foggy, having trouble focusing so I started eating nutritional yeast, bee pollen and fish for the phosphorus and omega vitamins for my memory and to help me study. I was able to do the work but I couldn’t retain anything, and after I started trying to deal with it nutritionally, I definitely felt better.

• What made you decide to study now that you have a business to run?

I have a lot of dead time here in the store; if I don’t have something to do I get bored.

• What’s behind the name of your store, Panificación Harlem?

I have this photo of all these jazz musicians in Harlem here in the store. I’m interested in black culture and music and I just thought the name sounded cool.

• Who is your favorite jazz artist?

I like Keith Jared and all the old jazz bands.

• Usually you have the Beatles playing in the store though.

Yes, I had to stop so I didn’t scare people away because I was always playing the Beatles. Even I got sick of listening to it, but when I’m busy it’s easier to just hit ‘replay’.

Abbey Road or Revolver. Even the early records I enjoy, they completely change my mood when I listen to them, and they make me feel happy.

I like Charly Garcia and folkloric music but if we’re talking about rock, I prefer the music of the U.S.— it’s the home of rock ‘n roll.

• What’s the product that sells the most here?

Bread and all the least healthy items sell the most. I have all these cereals and grains and nuts but the things people buy are the breads made with white flour and sugar and anything covered in chocolate. The more junk it has in it the quicker it flies of the shelf!

• What do you do if you get invited to a barbecue?

• What do you think about the use of all the genetically modified food in Argentina?

It’s ridiculous. There’s a good French documentary about it called ‘The World According to Monsanto.’ They make the soy genetically resistant to the chemicals that they sell so that people have to use more of their products. It seems like an episode of The Simpsons, it’s so absurd.

Even the tofu I sell here has a seal that says ‘not genetically modified’ but I don’t believe it. It’s not like there is anyone regulating it.

You can get healthy foods in Buenos Aires. If we don’t have it in stock, we can order it.