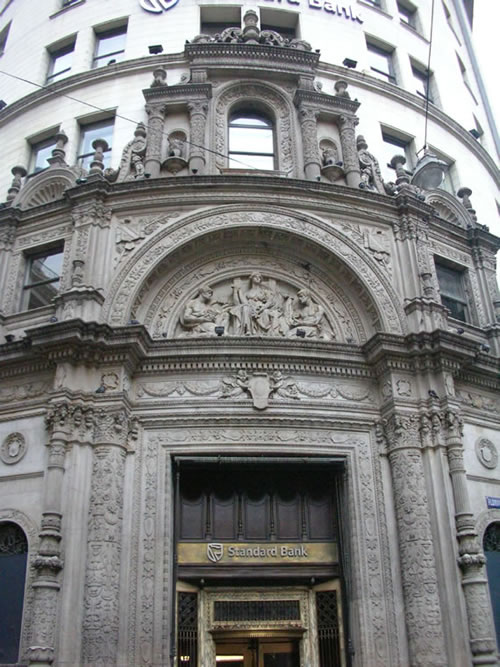 The architects of the Bank of Boston were two notable Argentine immigrants, Englishman Paul Chambers and American, Newbery Thomas who worked together on many other Buenos Aires’ buildings including Harrods Buenos Aires. Due to the strict municipal design codes of the Diagonal Norte area, the architects had to submit several plans during a two-year period before being approved by the city government.

As with most of the buildings remaining from Argentina’s golden era, no expense was spared in its construction. The skeleton of the building was built with 1,650 tons of steel shipped from the United States. The large doorway was made in England with four tons of bronze. Inside are huge columns, green Uruguayan porphyry detailing and marble-lined walls. The teller windows are framed with bronze and the high ornate ceiling is a covered in a gold colored casing.

The building has been the focal point for anti-U.S. protests through the years beginning with the 1927 bombing of the interior planted by Italian anarchist, Severino di Giovanni.

As a U.S.-owned bank it was also seen in news footage around the world after the 2001 economic crisis that led to the devaluation of the peso.

Protesters, banging on pots and pans, gathered outside the building and pounded on the door, demanding their money. For a long period afterward, the entrance-way and lower exterior were covered with sheet metal to protect the façade.

In 2004, South Africa’s Standard Bank absorbed the Bank of Boston and the building now carries its name in large letters. Although it is currently the cleanest it has been in years and the building is no longer American-owned, it continues to be a favored target for graffiti artists.

1 thought on “Florida St.— The Bank of Boston Building”