In San Telmo a thirst for home is quenched at Gibraltar Pub. 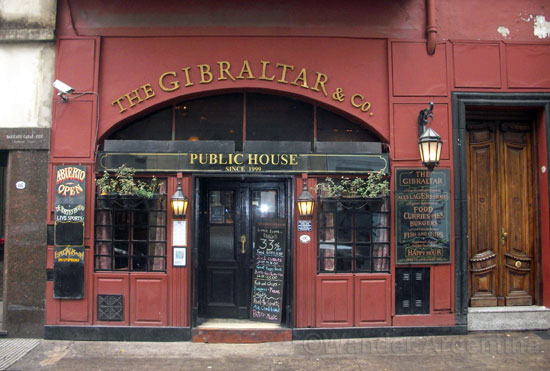 Here you’ll find good booze, decent music at a reasonable volume, an interesting mix of characters, and a few different environments to mingle.

Lounge around a booth in the front to watch European league football or the occasional NBA game, hook your bag under the sturdy bar to settle at the bar or pass by the open kitchen to on your way to hang out on the back area and patio.

A number of places to get good beer have cropped up in Buenos Aires since Gibraltar opened in 1999, but it remains San Telmo’s go-to spot to find a decent shot of imported whiskey, pint of IPA, Gambrinus stout, Antares Scotch or cider on tap.

The pub fare – as long you stick to the Indian or Thai curries, fish and chips and burgers — is fresh and tasty.

A frequent 2X1 offer on curries at lunchtime, makes this an inviting spot to invite someone for a casual lunch.

On the weekends they offer (on and off) a traditional English breakfast of eggs, sausage, baked beans and toast until 5 p.m.

Note that food orders are taken by the staff at the bar.

If you’re around San Telmo and looking to catch a football/soccer, basketball or rugby game on the tube, Gibraltar is one of your best bets in this part of town.

You can also join in on a game of pool, just put your name on the chalkboard and dodge pool sticks while you wait.

It can be a crowded on Friday and Saturday nights after 10 p.m.

In fair weather sometimes a line forms outside, much to the annoyance of regulars. It pays to get there early, as the Happy Hour 2X1 pints last until 10 p.m.

On weekends, neighborhood habitués often come in the afternoon and either settle in at a table in the back or move on before it fills up with young Argentines on a mission to snog foreigners.