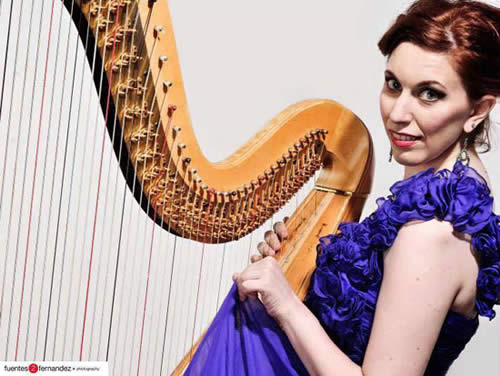 • Was the harp your first instrument? If not what other instrument did you learn first?

My first instrument was the piano, which I began studying when I was five years old. Studying piano previously helped me tremendously when I started the harp.

• At what age did you start playing harp?

• How does it occur to someone to decide to play harp?  Was there some piece of music or performance that inspired you to learn it?

I went to a summer arts day camp at a nearby college, Chatham University. One of the classes they offered was ‘instrument exploration.’ Each week we were introduced to a different instrument and one week they presented us with the harp. The sound was enchanting and otherworldly, and the mere presence and physical beauty of the instrument with its curves and carvings and colors was incredible. Most parents would advise their kids to choose a lighter, cheaper, more practical instrument that is easier to transport but mine were on my team!

• Did you ever imagine when you began that you would one day play at South America’s top opera house?

No! I always dreamed of landing a job in an orchestra but it’s quite difficult to actually win one, and I never imagined I would end up so far away from the U.S.!  Each and every day I feel incredibly lucky to have one of the world’s most beautiful and acoustically top-notch offices.

• When did you come to Buenos Aires to join the Colón orchestra?

I played as Principal Harpist in the Philharmonic orchestra of Santiago, Chile, for one year and then joined the Orquesta Estable four years ago, in April 2012.

• Did you have a drive to be excellent when you started or just loved it and kept practicing or something else?

Oh yes! Without the drive you can’t propel forward. Passion is paramount if you want to thrive. Playing is very comforting to me.

• How much did your harp cost?

About $33,000. I have two harps. The second came after a whole year of dealing with tramites (paperwork) and challenges in order to bring it into country.
They want you to pay 50% (tax), so I named the newest one milagro (miracle).

• How do you travel with a harp? Do you have any interesting or perhaps stressful anecdotes about traveling or trying to transport your harp?

Traveling with the harp is always a pricey ordeal.  I have found a lovely guy who I always hire to carry my harp in his van. He’s very punctual, reliable, and he even has a small mattress which we put underneath the harp. I also have a fabulous wheeler that was made in Europe and that collapses. It’s especially useful for stairs.

One time I was going to a rehearsal in the Teatro Coliseo and I had to use another harp mover. There were around thirty stairs leading up to the rehearsal room and at one point the harp mover fell and twisted his ankle.  Poor guy! Luckily the harp didn’t fall with him but it’s always risky as it is incredibly heavy!

The other day I was wheeling it down Corrientes on my way to Radio Nacional where I played with the Orquesta Filiberto! You could see the Obelisco in the background…

• What is your favorite piece of music to play?

On Sundays there are free chamber music concerts in the Salon Dorado, which provide a great opportunity to experience high-level music in an intimate setting and they are quite accessible for all.  For the real deal, I’d highly recommend seeing an opera. Every detail is decadent. Look out for works with stage direction by Marcelo Lombardero. His productions are so colorful, striking, and cinematic. We have world-class singers and a fantastic orchestra. If you sit lower down you can see better. Higher up sounds even better, so it all depends on your preference.

• Why do you think the Colón is considered one of the top five opera houses in the world? Do you think the renovation that was completed a few years ago retained or improved the acoustics?

Honestly, I never stepped inside the theater before the renovation so I can’t properly give an opinion about the renovations. The Colón tops the charts because of its stellar acoustics, not to mention its aesthetics and the world-class artists who perform in the house. I happen to find its (horseshoe) shape quite comforting; you feel like you’re being embraced.

Earlier this year I was playing Parsifal, and at the very end of the work there’s a magical part where the harp is accompanied by a children’s choir, singing from above the chandeliers. I swear that thanks to the acoustics it felt like the children were singing right by my side.

• Do you have any inside info on the Colón Theater that people not otherwise know?

There are widow boxes which are covered by grates. Apparently back in the (olden) days the widows were assigned to these boxes where they could see the action, but everyone in the house couldn’t see them.

The Colón is a giant labyrinth with many floors underground which extend all around 9 de julio. It’s quite easy to get lost.

It houses two orchestras, a choir, ballet, the library with all the parts, a cafeteria, human resources offices, a doctor’s office, and has many rehearsal rooms and areas where every piece of the production is produced. I have yet to explore many of these parts, such as the painting and wig and shoe studios. Being a member of the orchestra grants you free access to each and every show and concert which is a wonderful perk. I’ve often seen (actress and TV presenter) Mirtha Legrand attend performances, and she always sits in the same box.

• What do you think of the new dress code at the Colón?

To be honest, since I’m usually playing in the pit, I am not so informed about the audience attire. Sometimes I see gowns and fur and diamonds but I also see jeans and casual outfits.  But I had not heard anything about the dress code.

• How do audiences here differ from other places you’ve performed?

Audiences here tend to be an older, wealthier crowd. They seem to be respectful. I don’t hear a lot of phones going off or kids crying from where I’m sitting and playing.

• How many people are in the staff orchestra at the Colón? How many are Argentines and how many foreigners more or less? Are there any other Americans?

The Colón has two orchestras: the Filarmonica (symphonic repertoire) and the Estable (the opera orchestra which I’m in.) The Estable has around 92 tenured people. There are also around 30 people with temporary contracts. Of the permanent members, there are nine foreigners: two Chileans, two Uruguayans, two Ukrainians, one man from Turkmenistan, one Bulgarian, and one North American (me). There are also two other Americans who are contracted.

• Did you speak Spanish before you came here? Was there any learning curve or added difficulty in your job due to the language?

I studied French in high school, and learned some German when I was studying in Basel Switzerland. I learned a bit of Spanish when I was in Chile but the orchestra there had so many foreigners that we mainly spoke English. Lots of orchestra members want to practice English with me!

I’m still studying but my Spanish has improved a lot from when I first arrived. I still find it challenging because all official orchestra emails and paperwork and formal correspondences with the administration are in Spanish.

• What is your life like when you aren’t playing music? Do you have family or pets in Argentina? What do you like to do in your free time here?

• What is your guilty pleasure in Buenos Aires?

• It would seem your hands (and feet for that matter, since you play pedal harp) are very valuable for your profession. Are there any activities you don’t do because you can’t risk hurting your hands? Do you have special insurance related to this?

What a good question! I don’t like cutting things with big knives or lighting matches. I don’t have any special insurance — maybe I should.