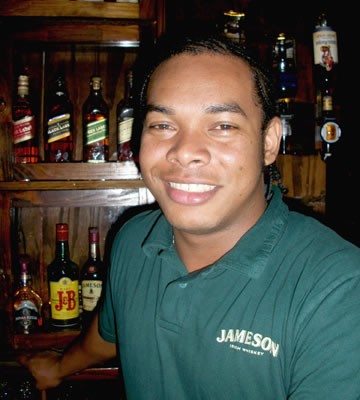 • How long have you worked at Gibralter Pub?

I’ve been behind the bar for five months, but I’ve worked here for two and a half years— I used to work security at the door.

• Do you prefer working behind the bar?

Yes, it’s much better. I don’t have to fight with people or tell them they can’t come in. We don’t let people in who are already wasted or any one under 21.

Yes, but we don’t let anyone in under 21 here– it’s up to their discretion. We have to check the I.D.’s of people coming in. Those who are younger usually go to other places like Puerta Roja (another local bar) anyway.

• Where are you from originally?

• How long have you been in Argentina and why did you come here?

I’ve been here three years. I came to study at the Film Worker’s Union of Argentina (SICA by it’s Spanish acronym) to get a degree as a Director of Photography.

• What were you doing before you came to Buenos Aires?

I was a cameraman for television for 13 years before coming here. I also have certification as a professional technician in industrial electricity and maintenance for television.

I like it quite a lot. Argentines are very friendly and they get along well with Colombians. There’s also better cinematic production here. Colombia produces about 10-15 big budget production per year and Argentina produces double or triple that number.

• Were there any cultural differences here that you had to adjust to?

The first thing that was difficult for me was the way that you kiss everyone hello – in Colombia we don’t really give that much trust to acquaintances right off the bat. We take time to get to know someone. Also here you call your boss by his name and if he yells at you, you can yell right back. You can treat him the same as you would treat anyone, there’s no, ‘Yes, sir’ or ‘Yes, papa’ or ‘Yes, mama’ or ‘Yes, ma’am’ — although even in Colombia this is beginning to change.

When we meet someone, we offer a handshake and maybe hug your close friends. At home the only men I hug and kiss hello are my grandpa, my dad and my brother.

It’s cultural — here they talk to everyone as if they were a friend or equal but in Colombia we have more respect for our superiors or older people, but it depends where you’re from. In a poor neighborhood in Cali or Cartagena people may talk like that but not in general among the middle class.

• You get people from all over the world in this bar. Which nationality holds their alcohol the best?

Germans and Belgians. I have a friend from Belgium and he can drink all night and keep standing firm, he’s very steady. Also the English and Irish.

• Do you like working here? How do they treat you?

Very good. The owner is very intelligent and considerate. The clients enjoy it here and can tell that the employees enjoy their job and are treated well, so it creates a trickle down effect.

• Many male visitors speak favorably of Argentine women, what do you think of them?

Well, I’ve been married eight months, my wife is Colombian as well. We got married while we were at home for summer vacation. But the Argentine women…? They are very pretty. They have nice hair and eyes but the way they hold themselves doesn’t quite reach me. There’s that thing of being a bit ‘hysterical’ as they say, but they are generally cool.

• Do you and your wife have children?

No not yet, but we practice all the time!

• Is cheating as prevalent in Colombia as it is here?

No. This is a pirate culture, for real. They have one eye open and the other is closed.

• Is it more chauvinist here or in Colombia?

• So why do you think cheating on one’s spouse is more common here, if it’s less chauvinist in general?

Well, here they lived through so much repression under the military government, so now that that’s over they just do whatever they want, it seems.