In the heart of Palermo Soho, just a block away from bustling Plaza Serrano, La Fábrica del Taco with its eye-catching neon lights is hard to miss. A fun and authentic Mexican restaurant, the ‘Taco Factory’ opened in 2009 and has since established itself as one of the hippest joints in town. The restaurant is successful enough that they recently opened a smaller location for ‘tacos al paso‘ in San Telmo. 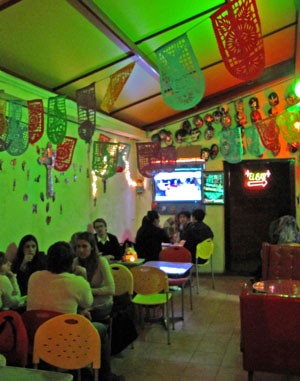 “First and foremost, we will always be about tacos,” says owner, Federico Lobeira, who aims to recreate the feel of the Taquerías in his hometown of Monterey, Mexico. In addition to authentic Mexican street food and delicious margaritas, the restaurant serves up a lively sensory experience with the sites, sounds and smells of Mexico, vivid colors and kitschy art.

Brightly colored lucha libre wrestling masks stare down at diners in one part of the restaurant, a collage of old boxing photographs in another. Dolls and wrestling figurines are found guarding the till or dangling from the ceiling. Multi-colored fairy lights are strung throughout the dining area with red and green plastic clothespins to create ambient lighting in the colors of Mexico. In the men’s room, old posters beckon readers to come and take up arms in Pancho Villa’s revolution.

The atmosphere is delightfully tacky and the festivity is aided by the drink specials, such as buckets of five Coronas, served with lime like they should be and two-for one cocktails, including some of the best margaritas in Palermo. For teetotalers and kids there are homemade juices such as tamarind, lemonade, Jamaica flower and horchata, sweet rice milk with cinnamon. 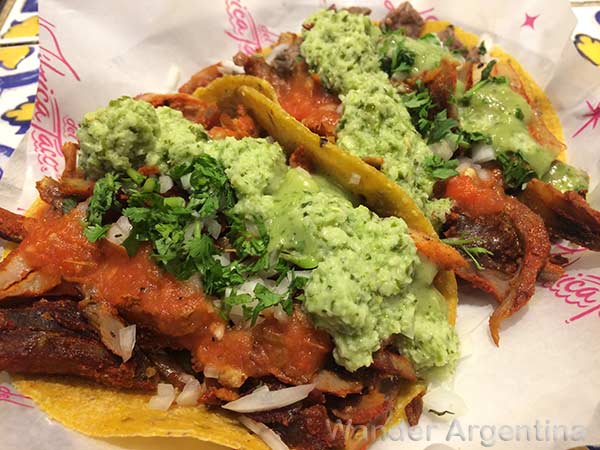 Marinated or barbecued beef, chicken, pork or vegetable tacos and quesadillas come with a choice of flour or corn tortillas. The portions are modest in size as well as price— supplement the tacos with the onion and coriander salsa or a plate of homemade, albeit mediocre, guacamole and nachos.

A new menu for those with heartier appetites includes beef, chicken, pork or vegetarian burgers, baked potatoes with a range of fillings and drunk or refried beans.

A selection of flautas, ‘flutes,’ or miniature tacos are a nice way for diners to try all the different flavors. Each table is graced with three bottles of homemade hot sauce, manna for spice-deprived foreigners in this city. 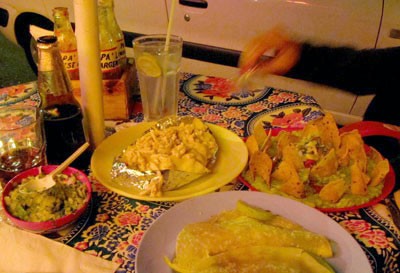 Each sauce, served in old Coca-Cola bottles, varies in spice content ranging from ‘For Argentines’ (who are known to shun spices) to ‘For Mexicans’ to one labeled ‘For Those Who Dare,’ which packs a welcome punch.

The street-side kitchen lures passers by, who can saddle up to the sidewalk seating in nice weather or make an order to go. Inside are two principal dining areas with smiling wait staff bringing a never-ending supply of bottled beers and tacos to hungry punters seated in red, yellow and green plastic chairs around reflective metallic tables.

The best seating is the outdoor Mexican-tiki style lounge out back with ambient lighting hung from trees, foliage creeping amongst hammocks and the Virgin of Guadalupe gracing the bar. Although the menu is strictly Mexican, the clientele is varied.

Recent price hikes may have put off a few regulars, but the prices still remain reasonable enough to attract a cross-section of locals as well as tourists. So broad is the appeal of La Fábrica that it is not uncommon to be seated between an Argentine family with kids munching sloppily on a hamburgers and a group of twenty-something gringos exchanging tales of legendary nights out over margaritas and nachos. You might even spot a celebrity — despite its lo-fi vibe, La Fábrica del Tacos has fed stars such as Charly Garcia (Argentina’s most eccentric rock star) and Francis Ford Coppola, who owns a home nearby. 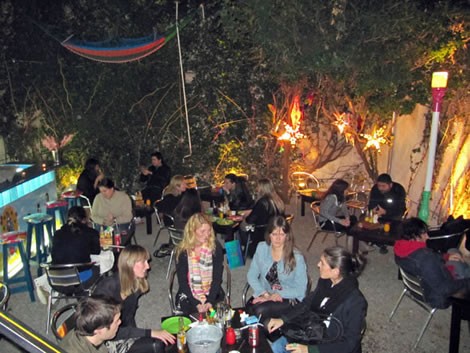 Busier nights, especially at weekends, will see diners spilling out front — be prepared to stand in line, especially if seeking a spot in the garden bar.

The only complaint with La Fábrica del Taco is that they aren’t eco-friendly — dishes are served on plastic plates and pints are given in plastic cups. Aside from that the Taco Factory delivers on their motto’s promise to send home diners with their ‘bellies full and hearts content.’