Buenos Aires is one of the world’s great party cities, which is why a proper pub crawl is obligatory. 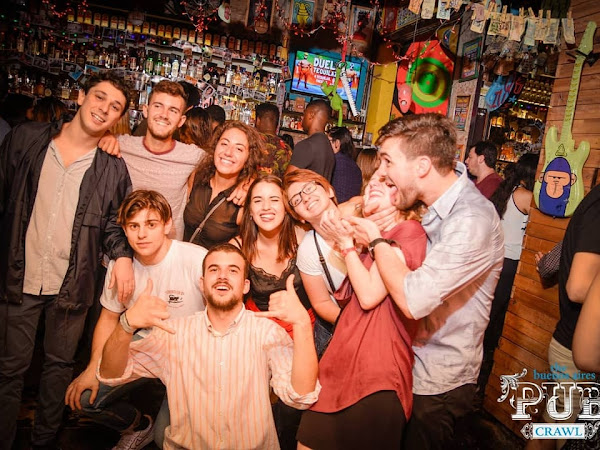 The Pub Crawl hasn’t returned since the pandemic took the world by storm.

Luckily if there is one thing that is easy to do in Argentina, it’s party.

• ➡ A small group wine tasting trip to the province of Buenos Aires to learn about wine making, campo culture and eat a lovingly prepared lunch

•  ➡ An eight-course modern asado set in a local’s garden. A great chance to meet locals and other travelers and pig out of course.

On a typical Pub Crawl night a crowd gathers around the fountain in Palermo’s Plaza Armenia.

It’s not unusual in Buenos Aires to see a bunch of grizzled characters hanging around in a local plaza drinking the night away with a few ballads, but it’s obvious this crew is a little different.

Hugs and kisses are bandied about between the regulars — mainly locals and friends of the Pub Crawl staff who obviously enjoy these big nights out on a regular basis.

Starting the Night at the Pub Crawl

A group of gay partiers carrying pink and black ‘Out and About’ balloons loudly join the proceedings, sending the energy levels (and average age) up a little.

Some jet-lagged Australian travelers, who only arrived in Buenos Aires a day before and found out about the Pub Crawl through their hostel, are already on a massive bender.

Two American friends who are in Argentina for a week’s holiday are on their second crawl.

“He picked up a hot Argentinean girl on Tuesday night,” explains one, pointing to his buddy, “so we decided to come back to try our luck again.”

A stack of cheese pizzas arrives and everyone tucks in right there in the plaza.

Several guys in black t-shirts sit on the steps taking the names of new arrivals and handing out fluorescent wristbands so that the pubcrawl staff can keep track of their protégés throughout the night.

In the end, the pub crawl group, mostly English-speakers in their twenties to early thirties, numbers at least 40.

As the alcohol flows, strangers start to mingle, kicking off conversations with the timeless icebreaker, “Hi, where are you from?”

After an hour in the plaza, a slight restlessness starts to pervade.

The folks are ready to start the pub crawl.

With impeccable timing, the guide who will be in charge tonight, stands up to address the party-goers.

His role is part guardian angel, part fearless general, and part MC —safely leading the troops while keeping things congenial and rolling along.

He is accompanied tonight by five other Pub Crawl staff.

The Pub Crawl guide addresses the group to lay out the plans for the evening, as well as provide a few words of caution.

The pub crawl is designed to visit  three bars and finish up at a nightclub.

Participants will get a free shooter upon arrival at each bar as well as drink specials all night and free entry into the nightclub at the end.

Everyone will be given a 10-minute notice before leaving each bar.

Pace yourself —  it’s a marathon not a sprint.

Pub crawlers are reminded to treat the bar staff with respect, don’t fall into potholes and be careful crossing the street.

The crowd, already buzzing, chatters and giggles throughout the speech, and have to be told to quiet down several times by Pub Crawl staff. Tough love.

Finally, the party begins for real, as the guide strides off to lead the group to Tazz Soho, the first bar of the evening, with the mob bustling along in his wake.

On this particular Thursday night, both founding members of the Buenos Aires Pub Crawl happen to be along; Dustin Walsh (now a Youtube star) and Roger Trueba, who makes the trip down from the US about once a month to oversee the operation, which includes 22 staff members, headquartered in an office in Buenos Aires’ downtown.

“Once we had the idea to go ahead with it, it took us six months to set everything up.

Then within two months of starting, the thing was huge,” says Trueba.

They have now set up another pub crawl operation in Santiago, Chile, and plan to do the same in several other South American cities.

“I had thought originally when we set it up that I wouldn’t have to actually be in Buenos Aires that often, but it’s become so big, running six nights a week, that I have to come back here on a regular basis to help make sure everything is going smoothly.”

Roger and Dustin are Kappa Sigma Fraternity brothers from Georgia State University and they continue to use their old fraternity to recruit employees for the Pub Crawl.

“We bring them down here for a year and it’s an excellent way for them to gain work experience,” says Trueba.

“The problem is that they have so much fun that they don’t want to leave after 12 months!”

It does seem like a dream job for the fresh-out-of-college staff.

They get to live in a beautiful South American capital, meet lots of new people and party all the time.

But even though their work attire consists of sneakers and t-shirts, there is a level of professionalism that they are required to maintain as in most any job.

If taking a bunch of young people — some who aren’t even old enough to drink in their respective countries — on a bohemian death march through the streets on Buenos Aires seems like a risky venture, it is.

“There’s always liability issues,” says Walsh, “We try to give the ground rules but keep it fun and upbeat.”

The Pub Crawl staff do keep the gang together as they move from bar to bar, corralling stragglers and maintaining control, even as the patrons get progressively messier.

So far the most shocking behavior on the pub crawl has been rather innocuous— spontaneous strip shows by participants.

“I don’t know what it is about rugby players but the second they start drinking they can’t resist the urge to strip.”

The Buenos Aires Pub Crawl is held in different parts of the city depending on the night of the week.

The Pub Crawl usually hits San Telmo on Monday and Saturday nights, Palermo on Tuesdays and Thursdays, and Microcentro on Wednesdays and Fridays.

The Gay Pub Crawl is on Saturdays.

The cost covers the introductory drinks and pizza, a free shot as well as drink specials at each bar and transport and entry into the club that is that’s night final destination.

Be prepared to spend a bit more than the initial price as it’s a long time between complimentary shooters, however the whole package offers good value for money for those who don’t know the city well.

As the Thursday group stumbles its way through Palermo’s cobbled streets to each new bar, instant friendships are formed amidst the beer haze, and rum-fueled romances blossom.

The bars visited (Tazz Soho, Clara and Quiroz) are fairly empty until the Pub Crawl arrives in numbers to turn the volume up from ‘relaxed Thursday night’ to ‘party time!’.

The final chartered bus ride to the Lost club is a particularly bonding experience as the last vestiges of sobriety have by now disappeared into the cool night.

Striding past the queue at the door and straight into the club, the group disperses into smaller cliques within the dark bowels of the monstrous venue.

The Pub Crawl staff are still around, but when and how the night finishes is now entirely up to each individual party-goer.

And while most will be nursing a hangover the next day, wallowing in the swamp of self-loathing and regret (albeit with some good stories to tell and a camera full of hilarious photos), the Pub Crawl crew will be back doing it again the very next night.