Mendoza, with its tree-lined streets, plentiful plazas, and prime location at the foot of the Andes is one of the world’s most beautiful wine cities, ideal for casual strolling through the streets. 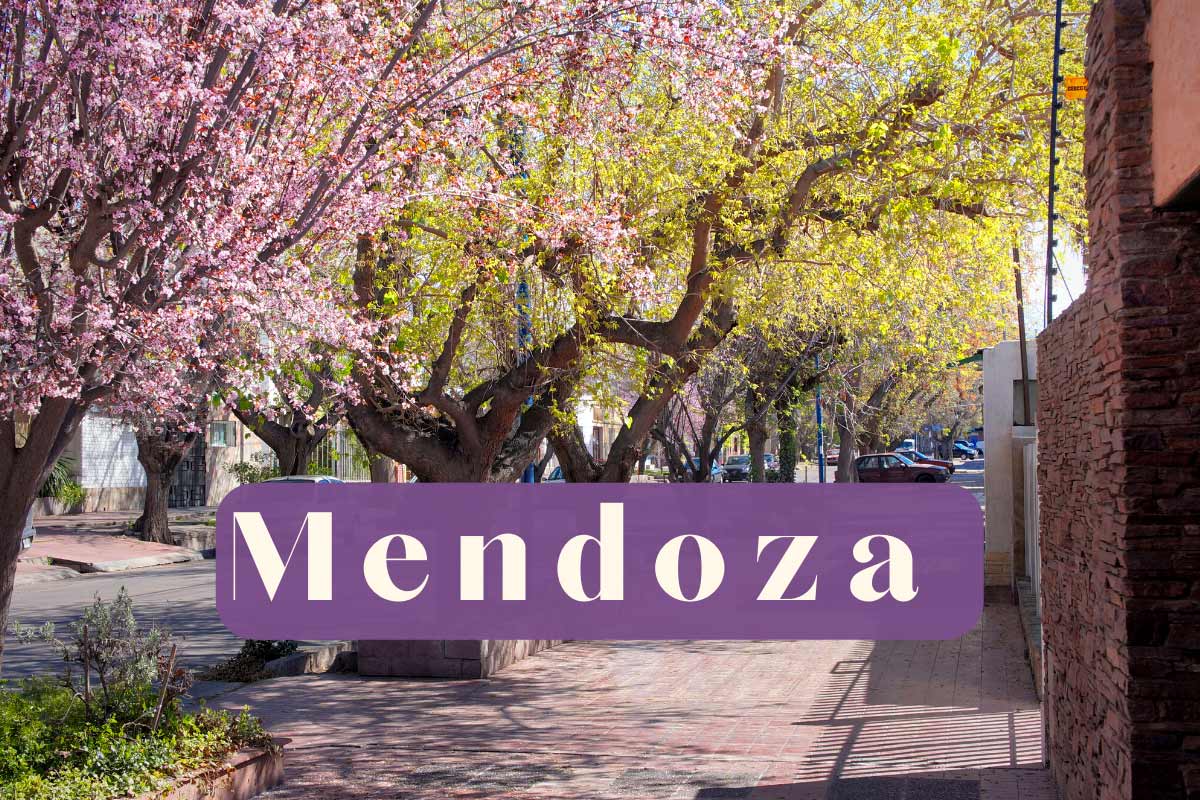 Early immigrants from Europe realized the potential for viniculture when they saw that not only was the Cuyo region blessed with abundant sunlight all year round, it also had a ready-made canal system, courtesy of the Huarpe natives, which brought water from the Andes mountains.

The area proved ideal for the cultivation of wine grapes, especially the previously under-appreciated Malbec grape.

The effective water-distributing canals are also the reason for the healthy verdure of the trees lining Mendoza’s downtown streets, as well as the fact that it is illegal to cut down or even trim one of the city’s characteristic trees without permission from the local council.

That particular law is great for the aesthetics of Mendoza, but not always favorable to its residents – it’s not uncommon to see a huge tree smack in the middle of someone’s driveway, or slowly strangling some poor telephone wires into a crackly death.

It’s also surprising that more people don’t break their ankles by tumbling into the grate-less streams running alongside every street, which are especially hard to notice after a few glasses of the local product.

Such a clean, organized and well thought-out city seems like a far-fetched idea for anyone who knows the lovable, but shambolic Argentines well.

The contrast between Mendoza and sprawling, chaotic Buenos Aires is striking.

This can partly be put down to sheer size difference between the two cities, and perhaps the typically slower pace of provincial life.

Tragedy has also played a part in shaping the Mendoza of today.

A massive 7.2 earthquake in 1861 almost totally leveled the buildings of the city, and wiped out an estimated 30% of the population.

From the rubble, the city was rebuilt along a carefully laid out plan that included low buildings, wide streets and dozens of open plazas, which would act as sanctuaries in case of future earthquakes in the volatile region.

Conveniently for tourists, the main wine producing districts are all located within 40 kilometers of Mendoza city center, so it’s easy to visit a handful of vineyards in a single afternoon.

Hiring a car is a popular option for those who have a designated driver, but it’s also easy to visit the vineyards as part of a tour group.

The latter option is surprisingly inexpensive, and allows a great deal of freedom to roam. The drivers are used to escorting tourists around, and they’re locals, so their inside knowledge can be really valuable. 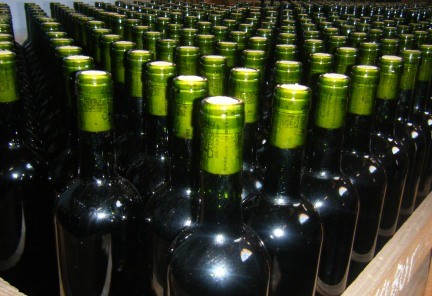 The best strategy in a Mendoza visit is to mix up vineyard visits — visit a couple of the big name wine producers, and also some smaller, boutique bodegas (wineries).

One of the biggest names in Argentine wine is Rutini, and their lovely La Rural Bodega (Monte Caseros 2625 – Maipu) is well worth a visit.

Rutini tours start with a visit to their very own wine museum, which offers an insightful journey through the history of wine production in Argentina.

Visitors learn about wine making from the early days of pressing the grapes by foot in large leather troughs, right through to the modern methods involving the grape passing through a series of impressive looking machines — each the size of a room — before the juice is fermented in massive temperature controlled vats.

The tour guides are slick and well informed, and at the end of the tour they will talk you through a tasting of some of Rutini’s famous wines.

With their vast vineyards and sophisticated production facilities, show visitors how traditional methods have been combined with modern technology to produce the quality wines, in vast quantities, that end up on our dinner tables.

Interested in having us design an amazing trip in Argentina including in Mendoza?

See some of the premium tours including wine, kayaking and horseback riding tours as part of a Mendoza itinerary here.

One of the real pleasures of visiting a wine region like Mendoza, however, is discovering for yourself your own little gems of winemakers.

One such gem is Bodega CarinaE (Videla Aranda 2899 – Maipu).

Owned by French couple Brigitte and Philippe Subra, who fell so in love with the region and its wine culture, that they decided to become a part of it.

Enlisting the help of world renowned French Enologist Michel Rollan they have produced a multi-award winning range of wines.

Phillippe’s other love, astronomy, works as a theme all through the bodega, from the names of constellations which appear throughout, to the starry design of the labels on the bottles.

Bodega Cecchin (Saez 626 – Maipu) is a maker of organic wines and olive oils of excellent quality.

Tours here have that personal touch, and the wines you can taste and buy here can’t be found in stores.

Similarly intimate is the vineyard Cavas de Don Arturo (F. Villanueva 2233 – Maipu), a family-run vineyard whose staff is knowledgeable and passionate about their product.

You can also find limited edition wines, which are designed by Don Arturo himself and produced especially for family occasions such as weddings and birthdays, and are available to buy only at the estate.

These are just a few examples of what can be found among the 682 wineries of Mendoza. Once you are there you can go ahead and discover some of your own.

Harvest time for the grapes is between February and April each year, and culminates with the Vendimia Festival – a huge celebration of the grape harvest and a perfect time to visit.

There are plenty of other things to do in and around Mendoza apart from tasting wine all day, although you could be forgiven if that’s all you did.

Apart from vineyards, the region is also prosperous in fruit growing and oliviculture.

Many of the area wine tours will also include a stop at one of the numerous olive groves, where you will be able to see how olive oil is pressed, and sample some delicious varieties on crusty bread.

For the more adventurous, there are plenty of outdoor activities such as kayaking, horse riding, mountain biking, some very good trout fishing and trekking, such as the Cordon del Plata trek Andes excursion to the summit of the Morro del Negro.

A typical Mendoza city tour, which takes half a day, will include pretty plazas, historical ruins left by the great earthquake, a spin around the General San Martin Park with its elaborate gates and Romanesque fountains, and a trip up nearby Cerro de la Gloria (Glory Hill), which has Instagram-worthy views of the picturesque city and its surrounding vineyards.

At the peak of Glory Hill is the coolest monument you will ever see, depicting José Francisco de San Martin, ‘Liberator of the Americas,’ astride his horse with arms crossed in all-conquering confidence.

He’s flanked by a horde of hellacious warriors, above whom rises Liberty, in the very moment in which she is shattering the chains of oppression.

It’s a monument that is as subtle as a train wreck, and quite spectacular.

➡ Argentina visitors will find elaborate San Martín statues around the country, including Buenos Aires and the small pampa town of Tandil.

General San Martin is a constant presence in these parts – his name is on everything —  as this is the place where he crossed the Andes in 1817 to liberate (or invade, depending on who you talk to) neighboring Chile.

Being so close to the Andes, a must while in Mendoza is taking a drive up through the three levels of mountain ranges, each greater than the last.

The long and winding road up Mount Villavicencio, famous in Argentina for being a source of bottled spring water of the same name, culminates in some spectacular views from the top.

Deeper into the ranges is Las Penitentes, one of the most popular of numerous ski resorts in the zone.

About five hours from the capital, just before the highest peaks, and the border with Chile, is the Puente del Inca, a colorful natural bridge formed by limestone that is rooted in native Huarpe legend.

Puente del Inca is renowned for the healing qualities of the hot springs found there. (The Cacheute Thermal Springs, a little up the river are nicer though).

Looming over everything is Aconcagua, the Andes’ highest peak, and the tallest mountain in the world, outside the Himalayas.

When to Visit Mendoza

Mendoza offers so much variety that it’s an ideal destination for young and old travelers, couples or families, adventure seekers or those just wanting a relaxing time drinking wine and wandering around.

You’ll need at least three or four days to see the basics, and could spend much longer time here without running out of things to do.

Mendoza has a dry climate and is sunny for more than 300 days a year, which means it is pleasant city to visit at anytime of year.

For six months of the year, from October until April, the climate is very agreeable, with daily temperatures range from 16-25 Celsius (60-77 Fahrenheit).

The spring months of September, October and November are planting season.

While temperatures are pleasant during the day, it cools off at night, especially at higher elevations.

The summer months of December, January and February are the warmest months, but unlike Buenos Aires Mendoza rarely gets unbearably hot.

Summer visitors will want to pack light, breathable clothes, sunscreen and sunglasses but also bring a couple of light sweaters for the evenings when it cools off.

International wine connoisseurs descend on Mendoza during its harvest months of January, February and March.

For anyone planning to visit more of Argentina than just Buenos Aires, sunny wine-soaked Mendoza is a worthy destination up there with other Argentina favorites such as Iguazu Falls, and Bariloche.

→Read our guide to accommodation in Mendoza here

1 thought on “Mendoza: Beautiful Wine City at the Foot of the Andes”