The city of Mendoza’s biggest party of the year is the National Grape Harvest Festival, dating to 1936. 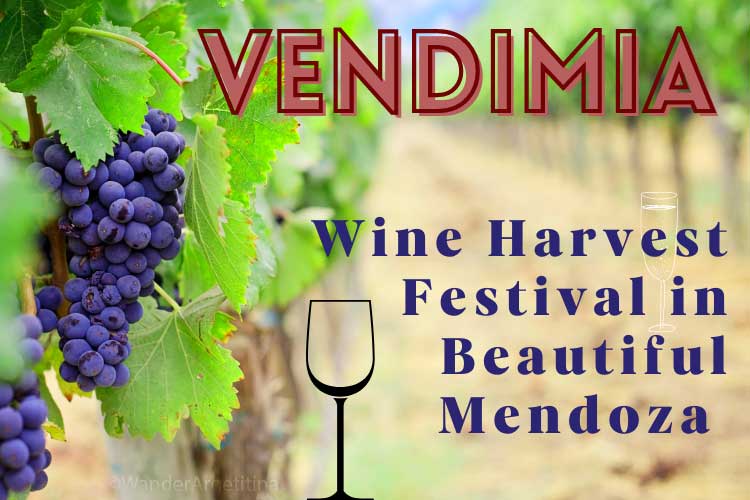 Fiesta de la Vendimia events begin in January and February throughout the province, and culminate in March, when 40,000 visitors come to celebrate and enjoy the local nectar, awakening the normally sleepy northern city.

The city’s fountains spew out wine-colored water and the city is electric with the jubilance that delicious wine brings, with a party spirit still spilling over from Argentina’s Carnival celebrations, not only in Mendoza but around the country in places like Gualeguaychu.

Aside from an abundance of Malbec, Mendona’s city-wide party features traditional cuisine, folkloric song and dance, and the main event — a beauty contest to select the ‘Queen of Vendimia.’

Wine connoisseurs from around the world and artists from all over South America descend on Mendoza during this time, creating a carnival-like atmosphere in the streets as the worlds of gauchos, international jet setters and Mendocinos (as locals are known) collide.

Activities take place province-wide in the months leading up to the main event.

Each of the 18 regions of Mendoza select a local contestant for the big beauty pageant at the main event.

Origins of the Vendimia Festival

Celebration of the harvest in Mendoza has come a long way from its puritanical 17th century roots, when wine was mainly utilized for consecration.

Peasants would offer fruit to the deity of the Virgin of Carrodilla, the celestial patron saint of Mendoza’s vineyards.

After the work harvesting was done they were finally able to rest and celebrate.

The more irreverent modern-day celebration goes back to 1936 and has evolved into one of the largest wine festivals in the world.

Vendimia’s grand finale starts on Saturday night with a live show and the introduction of pageant contestants in the Greek-style Frank Romero Day amphitheater.

The flashy main event is on Saturday, March 6th this year and repeats for the next two days, when 25,000 spectators fill the theater to see a Mendoza-cum-Las Vegas style performance.

The stage production includes the crowning of the ‘Queen of Vendimia.’

The huge Argentine Folklore production includes the participation of over 1,000 artists.

The extravaganza is followed by a large fireworks display, more wine and live music.

On Sunday, the Queen of Vendimia and other beauty contestants ride along floats in a downtown parade and the local wineries give away free samples to spectators.

The beauty contestant deemed the most beautiful and meritorious among all the contestants representing each region of Mendoza is coronated with a tiara made of grape leaves and vines.

Those who didn’t secure tickets for the big night can watch it all on a big screen set up in downtown Mendoza’s Plaza Italia.

Vendimia is also televised across the country.

When the Vendimia Festival is over the party is not! —

During the second week of March is the Gay Vendimia Festival, which started off as a campy parody, but today draws visitors in its own right.

Both these festivals are very popular so accommodation can be difficult to find at the last minute.

We recommend booking accommodation in advance.

In 2022, the Vendimia Harvest Festival returned.

Visitors can once again enjoy Mendoza’s pleasant fall temperatures, beautiful view of the Andes and the big show, all while enjoying the local libations.

How Does Mendoza Celebrate the Grape Harvest? 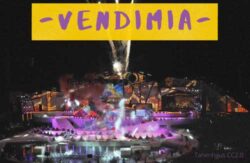 Mendocinos, as the residents of Mendoza are called, celebrate the Grape Harvest with song, dance, a beauty contest, parade and flashy final performance.

This year the final act is entitled ‘Miracle of the New Wine.’

What are the origins of Mendoza’s Grape Harvest Festival?

The origins of this festival date back to the 17th century, when it was more of a religious affair.

It became official in 1936 after the Minister of Industry and Public Works in Mendoza decreed it a holiday for the province.

At that time there were many newly landed immigrants working the harvest. Vendimia was intended to celebrate the end of the arduous harvest work, with wine, singing and dancing.

It was also a chance to let the single, lonely immigrant men cast their eyes on the beauty of the Mendocinas (local women) who are considered some of the most beautiful in Argentina.

The elaborate spectacle features the coronation of the ‘Queen of Vendimia,’ hundreds of performers, dramatic lighting effects and an explosive fireworks finale. 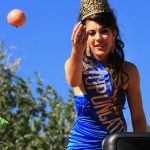 Yes, the beauty contest aspect of Vendimia is old fashion, and that is why the cool kids instead attend Vendimia para Todos.

But originally the Fiesta de Vendimia was organized when there were a lot of newly arrived immigrant single men looking to marry and settle down.

Local young ladies were looking for their future husbands (remember, this was before women could even vote).

There have been debates about the beauty aspect of contest in recent years.

The municipality of Guaymallén stopped electing an official ‘local queen’ to participate in the province-wide contest in protest.

Some opine that stopping girls who choose to participate in the beauty contest is also chauvinist.

Some are upset that trans women have started to compete.

Many who support the beauty contest say it is no longer just about looks, but also personal merit and values.

They say the Vendimia Queen serves as an informal ambassador for the province.

When is the Vendimia Wine Festival 2023?

Book your lodging in advance if heading to Mendoza during the VENDIMIA because the city fills up.

Due to the Blue Dollar, the most advantageous platform to book a hotel or apartment online is BOOKING.

Unlike other online booking platforms, it allows users to book in advance and pay in cash once arrived.

Check out these options:
→ Accommodation in Mendoza