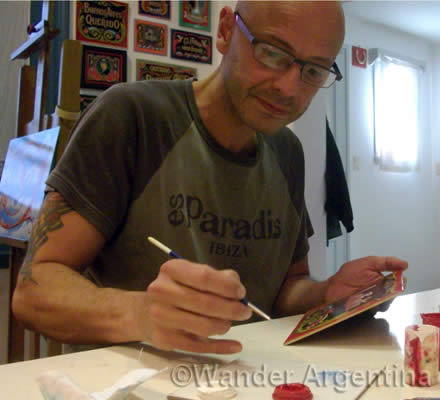 Q: Describe for readers who are unfamiliar, what is fileteado?

Fileteado is an Argentine decorative art that was born in Buenos Aires at the turn of the 19th century.

• Tell me about your work as a fileteador

I work in iconography, I do originals and also sell reproductions of my own work, just because many people want them and doing originals is laborious and costly.

I also do digital designs. Having a presence on the internet has really helped me and helped fileteo be recognized on an international scale.

In the 1980’s most of the fileteado artists were elderly men who weren’t actually even considered artists — even they themselves didn’t consider themselves artists.

• What actually constitutes fileteado, are there set designs one uses or is every design original?

• How many years of study does it take to learn this?

It depends on the person, but I have students that study with me for years.

• Where are your students from?

Many are from Buenos Aires but there are a lot of students from Brazil.

• Do they have a similar art in Brazil?

They have something that’s called ‘pintura em filete’ but it’s mostly to decorate cars, it doesn’t carry quite as much history as fileteado porteño.

• You studied with Ricardo Gomez, who was considered one of the old masters of fileteado.

Yes, I studied with León Untroib and with Gomez from ’78 until about ’85 or ’86. I was traveling in Europe when he died.

He was a very traditional, conservative guy. He was a purist about fileteado. I developed a system to use stencils to paint trucks that was a lot quicker and he didn’t like that.  I think maybe he was a little jealous because the work he did was very laborious and he didn’t get paid much. Also purple was prohibited for him. He didn’t like that I used purple.

• There are a lot of traditional sayings that appear in fileteado designs. Do you have a favorite?

• How is that phrase to be taken?

I take it as ‘there’s always the possibility that love could come after sex.’ It could be taken a couple of different ways, really.

• Your teacher was very traditional you’ve pretty much broken all the rules of fileteado – can you talk about that?

I take phrases that are already known and introduce eroticism and politics in fileteado. Until the 70’s it was mostly just cars and trucks that had fileteado.

One of the more controversial pieces is this one that says, ‘Algo Habran Hecho’ (They Must Have Done Something). This was a phrase that was used when someone disappeared during the military dictatorship. It is a pretty strong statement that demonstrates the mentality at the time.

I’ve also painted the Virgin Mary on a toilet seat lid. I also made a cartel that said ‘Puto el que Lee,’ (Whoever reads is gay) which is another popular saying.

The other areas where I’ve strayed from traditionalism are doing digital fileteado such as fractals and also fusing fileteado with tattoo, drawing custom designs for clients.

Another new element was incorporating Latin phrases into fileteado such as a piece that said, ‘Carpe diem quam minimum credula postero’ (Seize the day, putting as little trust as possible in the future).

Writing a phrase in Latin would not have been accepted by the old guys who did fileteado when I started. Most didn’t study in university and were self-taught.

I’m interested in introducing the politics of criticism within the language of fileteado. I don’t want to exhibit these pieces. I would be interested in doing some work critical of the government perhaps, but I also don’t really want problems. But I definitely wouldn’t do a piece like some fileteadores have done, celebrating Nestór and Cristina for the bicentennial.

• You note that filetado was mostly used on cars and buses but what about businesses?

There were some storefront windows that were painted but it was mostly buses. It’s too bad that in the 70’s the transportation department passed a law to ban fileteado on public buses because they said it caused confusion for passengers because the buses weren’t uniform. Once that happened there wasn’t any work left for the traditional fileteadors.

Now fileteado has gotten wider exposure again, but there are many bad fileteadores and a just a few good ones.

• You’ve done all types of work from advertisements to consignments. What type of projects are your favorites?

I get bored doing the same thing over and over so I do a lot of one-off projects for advertisements. I do fileteado in body art and have painted Charly Garcia and La Mona Jiménez for Much Music.

Sometimes ad clients keep changing their mind over and over again, sometimes I decide not to work with particular clients, even though the money is good.

• What would be your most well-known or celebrated work?

Probably those I did for Nike shoes and Evian.

• Women traditionally didn’t work in fileteado but now there are women in the field. How did women begin to get involved?

Yes, since I started women have begun to do it and get interested in it. I told Gomez he should give classes, he needed more work. He started teaching women in the classes.

• Did that bother him since he was a traditional guy?

No, well he liked women, so he did it. Women are more patient than men and do it because they like it, while men are generally looking to make a living from it.

But even Gomez didn’t make much money from it – he had a job to paint a truck that took a year and he got AR$-2000 for that, that’s back when the dollar was paired to the pesos, but still. He was tired in the end – it’s a bit of a distrustful world, fileateado — kind of like the tango.

That’s why I prefer to work with tattooists.

• Are you going to tattoo fileteado ?

I would like to tattoo, I’ll probably just give one to myself. I’ve tried it out on oranges but I wouldn’t want to do it with a human – if you make a mistake, all you can say is, oops!

To be good at tattooing you have to do it a lot of years. I just don’t feel prepared.

• You’ve traveled to a lot of countries. What was your favorite?

I liked them all. Maybe Italy, since I feel very Italian myself.

• What else would you like to do with fileteado?

Here there is a lot of competition and people buy cheaper work but it’s just because they don’t know how to distinguish good fileteado from the mediocre.