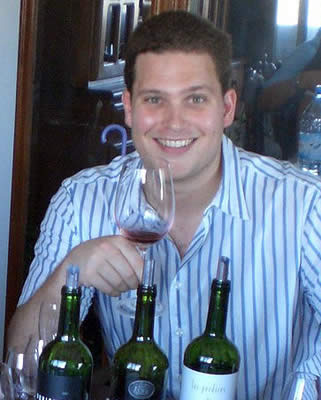 Q: You’re from Portland. What were you doing before you moved to Argentina?

I went to film school at USC then became a personal trainer. A very linear progression.
Q: Why did you decide to move to Argentina?

I was going to backpack around the world for two years when I left LA, and 36 hours into my trip I met my wife!

Q: What is the biggest difference between the concept of marriage here and the U.S.?

I’ve never married an American! I can tell you that the concept of a barbecue is very different from asado though.

Q: As the owner of Anuva Wines, what is your all time favorite wine?And wine variety?

With over 65,000 wine brands in the U.S. market its very hard to make that choice. Let’s stick with variety: Bonarda. Yeah that’s right, Bonarda.

Q: How do you come up with new business ideas? Do you test them somehow before plunging in to a venture?

New business ideas are not hard to come up with. They get pulled out of thin air by many many people every day. The difference is what you do with them. For the first few ideas I just charged in, and some worked and some didn’t. Entrepreneurship is mostly about getting stuff done. It is also about thinking critically about what users, clients and customers really do and really feel when they are in the market for something.

Q: Is it more difficult to be an entrepreneur in Argentina or in the U.S.? Why?

It is hard period, wherever you are, and there are simply different flavors of hard. In the U.S. you have a saturated market and in Argentina you don’t. However in Argentina there is zero access to capital and in the U.S. there is some (there was more). Then there are laws, entities, labor, and so forth. It’s all a balancing act.

Q: You mentioned you’re one of the few unfortunate expats who experienced a home invasion robbery. What happened? Did the bad guys get caught? How has the experience affected your lifestyle?

One summer night a guy decided to climb up the front of my building and let himself in to steal our laptops. They did not get caught. Now I am much, much more paranoid. I moved to the 11th floor, in the back of a building with 24 hour security in Las Canitas.

Q: How did the idea to do the BA Cast come about? Do you have a background in radio? How is it going and what have you learned doing it so far?

BA Cast was an idea that my partner, Fernando and I honed together. He came to me with a, ‘let’s do a show for expats’ and we did lots of piloting and refining of our systems, testing different types of skits and songs. It was really just the two of us having fun together and figuring out a system so we could make that fun efficient. That probably makes no sense.

Q: Your venture the Mule Pool is described as ‘Ebay for schlepping.’ You have checked it out with lawyers and it’s up to the ‘mules’ to pay the notoriously expensive Argentine importation tax on any items they bring in.  If that is the case then why is it better to have a ‘mule’ bring in, for example, a new laptop to someone whose requested it rather than just order it online and have it sent here via Fed Ex and pay the importation fee at the postal customs office? In other words, if the service is not designed to skirt importation taxes doesn’t that remove the profit motive?

Q: There isn’t anything about the lack of profit motive if the mule pays taxes on electronic goods though, what about that?

All of them except that I really value my time a lot which most Argentines don’t. This is a common topic on BA Cast.

Name: Karla Johan Profession: Sommelier of Mate & Author Lives: Belgrano, Buenos Aires From: Missiones Age: 45 and well-preserved, thanks to mate! How and at what age did you start ... Read more

Name: Melany VegaProfession: Promoter/Singer Lives: Congreso, Buenos Aires (originally from Salto, Uruguay)Age: 25 • You grew up in Uruguay. Where? And what was it like to grow up there? I ... Read more

Dustin LukeYoutube starAge: 32Lives: Belgrano • You are an enduring Youtube star in Argentina, have sponsors, published a book and also a have a marketing agency and production company. Which ... Read more