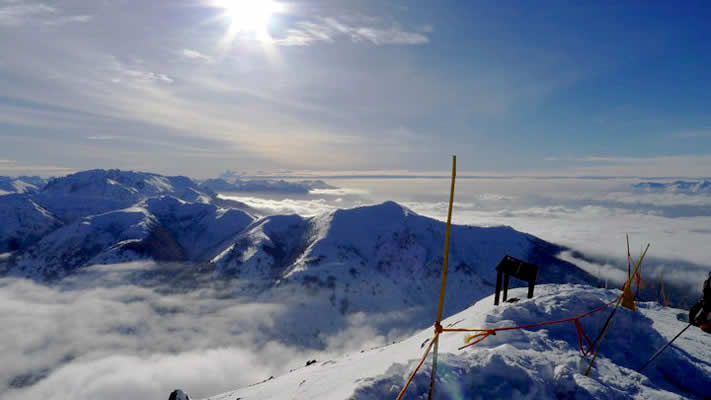 Catedral Alta Patagonia, as it’s officially named, is popular both for its extensive terrain spread across three mountains and its 19 kilometer (12 mi.) proximity to Bariloche, Patagonia’s second largest city.

South America’s oldest ski resort debuted in 1938 and today features a full-service village at its base, making Bariloche the only bona fide ‘ski town’ in Argentina.

In 2009 the aging Catedral resort underwent a multi-million dollar renovation. The revamp doubled the lift capacity to 22,000 and added four kilometers of cross-country skiing trails, a new terrain park, a tubing trail and a toboggan run.

Catedral’s modernization also included the purchase of snowmobiles and quadbikes for back-country tours and to reach the exclusive mountain restaurant, La Cueva.

The Toronto Star went so far as to call Cerro Catedral the world’s number two ski destination after Aspen, Colorado.

Due to the wet conditions and proximity to Lake Nahuel Huapí, Cathedral is actually best compared to, not to Aspen, but Lake Tahoe.

The snow at the lakeside ski mecca is usually more like ‘California cement’ than light ‘champagne powder.’

The heavy snow and a few older lifts are the resort’s biggest drawback for spoiled snow hounds accustomed to skiing in the Rockies or the high Alps.

Still, Cerro Catedral is a favored destination for pro skiers and snowboarders from the Northern hemisphere for its deep powder, extensive off-piste terrain and the opportunity to ski when it is summer in the northern hemisphere of course.

Only 17% of Cerro Catedral are novice runs, 35% are intermediate and the remaining 48% is advanced and expert terrain. 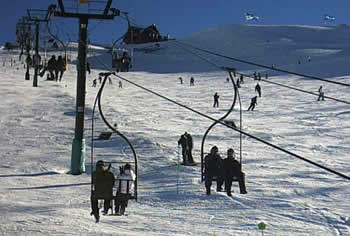 As happens often in Argentina, the rave reviews compelled Catedral to jack up their prices, making the lift tickets out of reach for many Argentines.

Day passes at Catedral cost about half the price of the most well-known resorts in the western U.S., Europe and Canada.

International travelers still might find Catedral a bargain and the increased tickets prices are still offset by the prices of Argentina’s succulent steaks and fine Malbec.

Bariloche qualifies as an excellent candidate for ski junkies from the northern climes looking to ski during their summer, but be prepared for higher prices during the high season.

If you were going to move to South America to be a ski bum, Bariloche would probably be your best bet, but unless you hold local residency papers, the season’s pass costs a a couple of thousand dollars. A monthly pass costs nearly a thousand dollars in the high season.

This region of the Andes has some of the world’s most breathtaking landscapes and Bariloche is a bona fide ‘ski town,’ but if good skiing conditions are your main pursuit you may be more satisfied with Portillo resort in Chile or Las Leñas in the Mendoza province.

It is a trade-off though — visitors will find Portillo more expensive and the views, dining and services at isolated Las Leñas can’t compare to the activities offered at Cerro Catedral and around Bariloche.

Skiing in South America: When to Travel

Bariloche’s snowfall is sometimes disappointing early in the season and the resort doesn’t make as much snow as it could at the base of the mountain.

The best time to go to Bariloche to ski is later in the season, even August. Travelers should keep in mind that the school holidays during the July/early August high season mean that Bariloche and the slopes of Catedral are crowded with relatively inexperienced skiers at that time.

There also seems to be a laissez-faire attitude toward slope grooming and a dearth of ski patrol to keep macho skiers in check.

Intermediate and advanced skiers and snowboarders will have the most fun if they head to the top of the mountain early and stay up there all day. The backside of the resort’s La Laguna area is not to be missed.

Beginner skiers will be happy to find that lower cost tickets are available for just the bunny slopes.

Skiers 70-years-old and up get the rock star treatment they deserve all season — tickets for seniors are free.

So all 70-year-young and up ski bums should put Cerro Catedral on their bucket lists.

If you are serious about skiing, bring your own equipment and ski wear to save time and money (imported items tend to be expensive in Argentina), otherwise basic equipment rental is available at a reasonable price.

→ Read about the Andean Lakes crossing tour and book online

Getting there from central Bariloche:

• By car: Take Bustillo Avenue to kilometer 8, turn left to reach the parking area.
→ Read about driving in Argentina and renting a car

• By bus: a shuttle leaves for Cerro Cathedral every thirty minutes from the bus station and stops all along the main strip in downtown Bariloche and along Bustillo Avenue. You will need a special smart card to ride the bus. Ask your hotel to lend you one, and keep in mind you will probably need to put credit on it

-A reader recently contacted us to recommend car rental for skiers at Cerro Catedral. They informed us Bariloche shuttles are often full, so they had to wait an average of one hour and up to two hours for a bus.