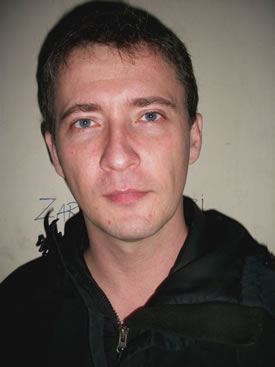 Q: Where are you originally from?

I grew up in Krakow until I was eight and then we moved to New York City. I also lived in Texas, Michigan and the last place I lived in the states was San Francisco.

• How long have you been in Buenos Aires?

For about eight years.

I had been traveling for a year from Mexico and I was tired, and I met a girl so I stuck around for a while, then I left and came back, left and came back. Since I kept coming back I figured I’d stay, because I did get to like it here.

• You traveled overland from Mexico?

Yes, in bus, via alpaca, donkey, hiking — you name it. There was also one boat involved and one airplane — from Panama to Colombia.

Here they say that in Europe and the states they live to work, while here you work to live — it’s a little more human. People are more friendly and down-to-earth; they’re not so uptight and competitive.

• You get every nationality under the sun in here. Who holds their drink the worst out of all the nationalities?

That would have to be the Argentines. They’re not used to spirits. You get two or three shots in them and they’re on the floor. Except for Fernet, they can drink that like water.

• Is it true what the Argentines say, that Fernet doesn’t give you a hangover?

Fernet has 43% alcohol but if you stick to drinking to Fernet all night, you’ll do better than if you drink whiskey, say.

• And who holds their drink the best out of all the nationalities?

That would have to be between the Irish and the Polish.

• What’s the crazy thing that’s ever happened in Krakow while you were manning the bar?

Once we had eight girls dancing on the bar simultaneously. It was just a spontaneous thing.

• How would you describe the clientele at Krakow?

Sometimes we get packed with tourists, we have local businessmen, foreigners that live here, people who come from Palermo — we get everyone here.

• When did you open the bar and how is business now?

We opened on December 1st, 2008. It’s going pretty good now. The first half of this year was pretty rough with swine flu and the global economic crash but it’s pretty steady now. We can’t complain because a lot of other businesses have closed.

• Was it a pain to get the business license and get everything going?

• It seems like you guys are pretty popular now, was the success immediate?

For the first six months it was pretty rough because it takes a while for people to know about you via word of mouth, but we survived those six months and now it’s okay.

• Running a bar in San Telmo you must meet all sorts of people, lots of women and have all sorts of sordid tales, how do you keep on top of it?

When we started it was pretty crazy but now we just try to work and not get carried away with stuff. At first it was a party — now we have a business to run.