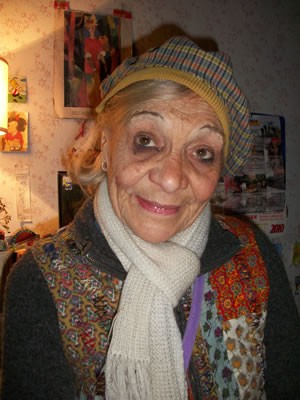 Q: What do you do on a normal day such as today?

Today I went to mass and then I went to the bakery and talked to the kids there because I don’t like to be alone. Sometimes the girl next door invites me to come over and watch TV for a while.

Can you believe that I’m prohibited from going to see my sister? If my husband Jorge was alive I wouldn’t care but my family is all I have.

• How long were you married?

We would have been married 30 years in 2001. I was 39 when we got married. We were two sisters that married brothers.

• How long have you’ve lived in this boarding house and how did you end up here?

We moved here ten years ago. Jorge lost his job and we couldn’t afford to live in Devoto anymore. We went to the municipality and then we came to live here. We both cried in this room. He died at 73, losing his job killed him.

• How long ago did your husband die?

He died nine years ago. He was sick actually they called me saying to rush to the hospital and when I got there they told me. They didn’t want to tell me on the phone. His heart just gave out. And then for three years afterward I didn’t see my sister — it’s so terrible.

Jorge told me he thought he might be sick though and told me to promise him that I wouldn’t be alone if he died. I did have a boyfriend for a while, who was 56. He was a doctor. He helped me with everything.

• What happened with your boyfriend?

We stopped seeing each other.

• What were your interests growing up?

I studied piano and violin as a child. I didn’t go to university. My parents wanted me to but I wasn’t much for studying.

• Did you have kids?

No, Jorge didn’t want to have kids because of the diabetes in his family.

• It must have been hard to stay in the same room here after he died?

Yes, but my niece called me a lot and I go out so that I’m not alone.

• What interests do you pursue?

I go to mass everyday at 7 p.m. at Pedro Telmo church. In the morning I walk around, just to get out of the house. I read newspapers and magazines and I go to Florida Street and I often go to the House of Culture.

• So you must be very religious to go to church everyday?

No, not really. I go just to go out of the house. The priest looks down at me from the alter like he’s thinking, ‘Why does she come everyday?’ He’s not even good looking.

• How has Buenos Aires changed since you were young?

It’s changed a lot. It’s better now. It’s more liberal and open. Here in San Telmo you see all sorts of people that come from other countries.

•You talk about it being more liberal now, what do you think of gay marriage?

I don’t like it. What is it going to teach the kids?

• Does what people do in private affect you though?

Honestly, it disgusts me. Two guys together? There are a lot of women together too.

• But didn’t you say you liked that it was more liberal these days?

Well, I mean the politics are more liberal. It’s more diverse. It seems to me that this way of living is better.

• Were you a Peronist?

I was never a Peronist. I was in the Liberal party. My sister was a communist and that divided us a lot. I don’t know why she hates me though. She’s very communist. Jorge was Catholic and they are communist – image it! Jorge helped her out, gave her money sometimes, but people forget. There was always opposition. My mother didn’t want me to marry him either.

• You are always wearing very unique and creative outfits. Where do you get your sense of style?