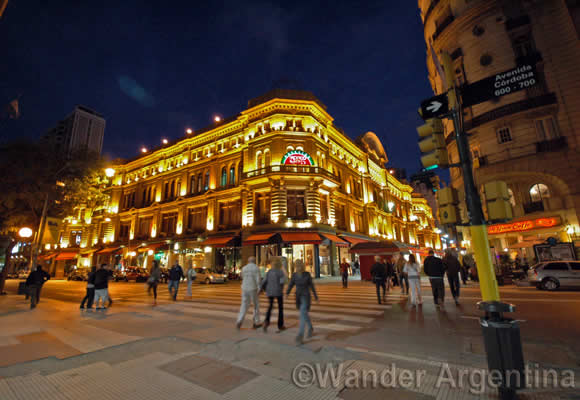 The 1991 debut of Buenos Aires’ downtown shopping mall, Galerías Pacífico, is what saved downtown’s Florida Street from becoming a complete ghost town in the 1990’s.

The beautiful 1889 building on the 700 block of Florida, at Cordoba, was originally modeled after Paris’s most important department store, Le Bon Marché.

Later this was the first location of the National Museum of Fine Arts, and then home to the British Pacific Railway administration office, from which it derives its name. 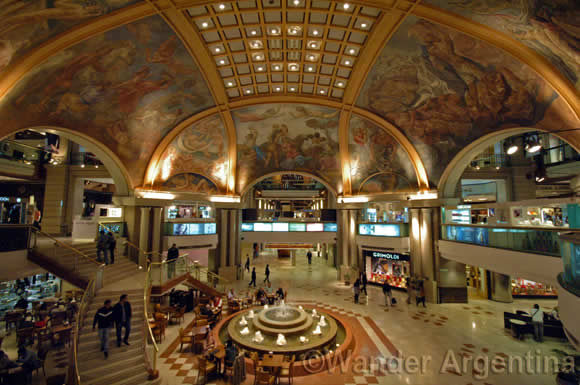 In 1945, the building’s huge central dome was constructed. The Beaux Arts style frescoes by artists Antonio Berni, Lino Spilimbergo, Manuel Colmeiro, Demetrio Urruchúa and Juan Carlos Castagnino are some of the most celebrated in Buenos Aires.

In 1989, one hundred years after its opening, the building was declared a national historic monument. Shortly after it was reopened as downtown’s premier shopping mall, artists Rómulo Macció, Josefina Robirosa, Guillermo Roux and Carlos Alonso added an additional four frescoes.

For visitors it’s definitely worth taking a spin around the mall to admire the elegant building, although as with most shopping along Florida Street, the merchandise is not particularly unique.

The mall is home to many international brands such as Polo, Tommy Hillfiger, Christian Dior and Hugo Boss. The prices rival those in the developed world, but at least shoppers can get a refund on the 21% VAT tax.

A few high-end local brands such as polo outfitter, La Martina, and Lopez Taibo, for leather shoes and accessories, may be of more interest to visitors.

Behind the designer glitz of Galerías Pacífico, is a darker, spookier past that few tour guides mention.

As author Naomi Klein describes in her book, The Shock Doctrine: The Rise of Disaster Capitalism, in 1987 a documentary crew discovered the literal writing on the wall — names and messages left by former prisoners who were presumed to be tortured in the building’s depths during the 1976-1983 military rule of Argentina.

Those with kids in tow may find Galerías Pacífico’s clean bathrooms utilitarian while exploring downtown. The busy food court has a lot of options ranging including Asian stir-fry joints, classic grilled meat restaurants, including the highly-rated Postavecchia, standard fast food, and artisanal ice cream that is hard to pass up.

Even though it is a high-end shopping mall, culture vultures will not want to miss Galerías Pacífico because of the Centro Cultural Borges (Jorge Borges Cultural Center) on the premises.

←cont. from: Harrods Buenos Aires and the Decline of Florida Street 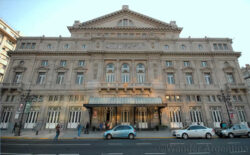 One of Buenos Aires’ finest landmarks, the grand Teatro Colón occupies an entire city block and an even larger space in the hearts and minds of Argentines. The theater is ... Read more 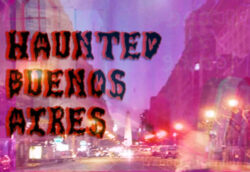 Buenos Aires is a lively metropolis but it has a spooky side. Parts of the city were constructed on top of old burial grounds, soldiers died on the streets of ... Read more

Puerto Madero’s Humor Museum (MUHU) celebrates everything to do with Argentine humor with exhibitions featuring graphic and political art, comic strips and animation, shown in their small cinema. The permanent ... Read more