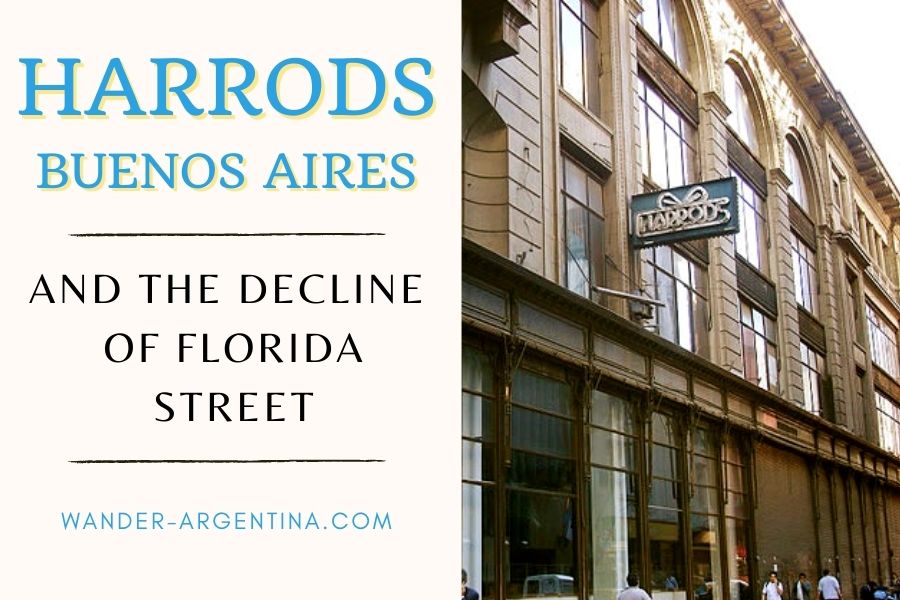 In 1914, Britain’s most prestigious department store, Harrod’s, decided to open an overseas branch in Argentina. The beautiful Belle Époque style building takes up most of the block at Florida 877, and for many years was the city’s most elegant department store.

Harrods Buenos Aires remains the first and only foray into foreign territory for the famous retailer, highlighting Argentina’s importance in the early days of the twentieth century. It was known as the gathering place for the city’s elite in the decadent tea salon and the place to buy Italian suits, expensive perfume and imported jewelry.

In the 1940’s when her husband, Juan Peron was in power, Eva Peron was said to shop here despite being the figurehead for the country’s underclass.

A slow — and for Buenos Aires residents— painful death of Harrods began in 1989 when the top floors of the building were closed one by one.

Finally in 1998, Harrods Buenos Aires closed altogether due to debt problems. Later, a conflict over the use of the name with UK Harrods’ owner Mohammed Al-Fayed (father of Princess Diana’s boyfriend Dodi Fayed, who died in a car crash with her) continued to delay its reopening.

The closing of Harrods was a huge disappointment to nostalgic Porteños who fondly remember going to the children’s barbershop and lining up for a photo-op with Santa Claus at Christmas time. If there is one single reason for the decline of Florida Street in the 1990’s as a gathering place for Porteños, it is the closing of Harrods.

“I went there to buy clothes for school,” says Eduardo Masllorens, Eternautas tour guide. “There was a dwarf with a little hat who opened the doors of the cars that pulled up. Anyone who is over 50 remembers the dwarf from Harrods.”

Like so many other life-long residents Masllorens remembers going to visit Santa Claus at Harrods as well. “All the kids would write their Christmas wishes on a piece of paper and then Santa Claus would lift you up and kiss you and, I don’t know how the system worked, but they would somehow arrange for the parents to get the wish list on the way out.”

Apart from opening up for a few special events over the years, such as Tango Week in 2008 and 2009, Harrods has remained closed ever since. Now the grand department store is tentatively expected to reopen its doors in 2014 as a gay shopping center.

The current plan is to conserve the historic details such as the Tea Salon with its beveled mirrors and intricate moldings while bringing it up to current safety codes and incorporating modern technology that has become essential to the modern shopping mall, most notably, escalators. No one in the city is holding their breath though – the reopening of Harrods has been announced several times with much fanfare in the past, but it has nevertheless remained closed, while capitalists and preservationists continue their battle over the building in the courts.

—Tango Week on the first floor of Harrods—