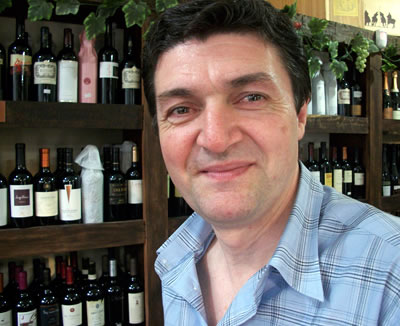 • When and why did you open a wine and cheese store here?

We opened it 2005 after doing an investigation into what type of businesses the area was lacking. There wasn’t a winery in this neighborhood so we decided to open one that would also feature specialty products from the provinces.

• What’s your most popular wine?

The Alma Negra line is our most popular. It’s a wine put out by Ernest Zapata. There are three varieties. The only thing the label displays is the color of the wine – the type of wine is not revealed— it’s a mystery, that’s the gimmick. We’ve tasted it here. It is nice. We think the red is about 70% Malbec because of its body and flavor, it also is quite a brilliant red which means it has to have a lot of Malbec.

• Argentina is celebrated for its red wine, can you tell me a bit about the market for white wine?

Here the market is 80% red wine and only about 20% white wine— if that. There’s not a big market for white because in Argentina we don’t consume a lot of fish – and that’s traditionally the food that is accompanied by white wine. You can eat fish with a red wine but it has to be prepared very well.

The two classes of white that dominant the market here are Chardonnay and Sauvignon Blanc as well as Torrontés. Lately sushi is the food that is most often accompanied by a white wine. Sometimes people will chose a rosé as well, which isn’t as acidic as some young white wines. You can’t have a very acidic food with a very sweet wine.

• Among all the specialty foods in your shop, what sells the most?

We sell cheese more than anything else. We sell to a few French restaurants and catering companies who offer cheese platters with six or seven varieties of cheese. The interesting thing is in Argentina we eat cheese as an appetizer but the French eat cheeses such a Camembert or Brie after dinner, as a dessert or, more specifically, as a prelude to the actual dessert.

• Are most of the cheeses you sell national or imported?

We carry a few imported cheeses from France but now there are big problems with importation, so we mostly utilize Argentine cheeses.

The government makes it difficult to import some products such as cheese because they would prefer people to be purchasing national products. Also there is a requirement that all cheeses have to pasteurized but many of the French cheeses aren’t pasteurized, so we can’t import them at all.

Argentine cheeses are much smoother— we don’t have those very pungent cheeses — really there is no comparison because those types of cheeses don’t exist here.

• With all this wonderful food in the store how do you avoid eating everything in sight?

You can come over here and eat free for a week and very shortly you will get your fill! After a while even the smell of all the meats and cheeses is off-putting.

These day we tend to eat fresh food, like a lot of salads and occasionally beef — basically things that have nothing to do with cheese and cold cuts.

On the weekends we do take some products home to prepare a meat and cheese platter. If we go to a friend’s house they always want to try the new foods we have and it’s pretty much expected that we’ll have the goods, so that’s mostly when we taste the products.

• What do you like to do as a family?

The only day that we all have together as a family is Sunday so we go walking around or to the club or go to see friends that have activities. We’re here at the store so much that we like to get out and about on Sundays.

• Have you thought about hiring another employee?

Yes, we have in the past but right now there is less work so we decided run everything ourselves for now instead of hiring another employee. That way we can reinvest the money in the business. Our daughter sometimes comes to help on Saturdays as well.

November and December are big months for us though so we may hire some one at that time.

• You and your wife work together everyday. Not every couple is able to do that what’s the trick?

You need to know how to adapt and accept differences. Before opening the store we both worked in multinational corporations for twenty years so we know how to handle certain pressure and take pleasure in having our own business.

We just try to respect each other and be calm. You have to be flexible and be open to suggestions of your partner. When one of us gets a little crazy we straighten up pretty quick. Really we have so much work that we don’t have time to fight!

It is true that sometimes I like to do things one way and Virginia likes to do things another way. In the end we usually arrive at the same conclusion, but we get there by different roads.

• What are the rules on taking wine on the plane or shipping it home?

It depends on the place. For the U.S. you can usually take four bottles, and to some areas you can take six –- it’s restricted in California due to the competition with the wine market there.

We find that if a customer is flying first class they are generally able to carry more.

We ship our wines using DHL, sometimes there are taxes on the other end — it depends on the number of bottles and where we are shipping. Generally, we handle it on a case-by-case basis.

Well if you had asked us twenty years ago, we always went to Des Nivel. It was great back then. There were plastic tablecloths and all the plates were mismatched and everyone was friends with one another. A lot of people went there three or four times a week. It was really a typical neighborhood cantina.

We don’t eat too much meat now but if we want to have a nice dinner we go to La Brigada.

We like to think of this as a warm, welcoming place where people can come by and visit. Once or twice a month we invite neighbors to a wine tasting.

Anyone who comes by can get our email list to get updates about tastings.