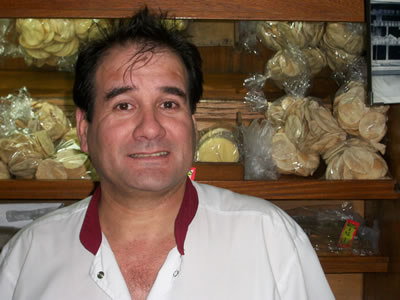 Q: This bakery is always so busy, but if people eat sweet croissants and pastries everyday for breakfast don’t they get overweight?

• Do you eat pastries everyday?

No, I just eat regular bread but once in a while I’ll have some pastries.

• You have been working here for 16 years and your job is as a counter seller. Don’t they give you a title such as ‘day manager’ or something after so long?

I’m a vendor but the bosses do see me differently, obviously, because I’m the employee that has been here the longest. If I don’t want to come in to work for example I don’t come in.

• And how often does that happen?

Maybe once a year.

• You said you have two teenager kids at home, is that as rough as they say it is?

No not all. They’re good kids. Here look at their pictures. My 16-year-old daughter is a bit more daring than her brother.

• Are you stricter with her?

Well yes, for obvious reasons, but not too much. She goes out with her brother and he keeps an eye on her, or the kids come to hang out at our house.

• You said they’re always on the computer but you don’t use it. What is the effect of having the computer and internet at home?

It does get in the way of conversation between us. Sometimes they don’t even look at me when we talk— they’re looking at the screen instead.

• And you never checked out the internet?

I don’t know how to use it. The kids could teach me but they’re so fast that I can’t even keep up with them. They just type away but I have to look at the keyboard. I have no incentive to figure it out anyway.

I’m from another generation. The kids now know how to do all this stuff from a young age. They need more hard disc space in their brains!

• Do you try to get them to spend less time connected to the computer?

I tell them not to spend so much time on the computer but they don’t have as much fun without it. They get bored quick without it.

I always liked working in the commercial sector. As a young person I sold churros, empanadas and kerosene.

Up until 40 years ago there was no gas in the homes out in the province. I grew up in Morón. There was gas-oil, which isn’t very clean burning, and kerosene. I went around and sold it door-to-door.

• What do you think when you go back to Morón now?

Now with the drugs there it is a little messed up. That junk is all over the world now.

• Are there a lot of people like Leda that come by to say hello everyday?

Yes, a lot of people come by to see me. You can see that everyone going by says hello. There is a couple that I know from here in the bakery and one day I saw them in my neighborhood in Villa Crespo— it turned out they were my next-door neighbors. This is my home practically.

I don’t know how to do anything else. When I was young I worked for Jews and Spanish people, they stayed late and worked hard, so you did the same. The work ethic rubbed off on me.

• But some say that the Spanish don’t have a reputation as hard workers, or is that wrong?

In Spain they don’t have a reputation as hard workers! But they came here after the war and had to work a lot to get ahead.

• How many street children are there that come by to ask for bread?

There are three kids that regularly come by. They have homes; they’re just poor.

• You’ve been married for twenty years. What’s the secret to having a good marriage?