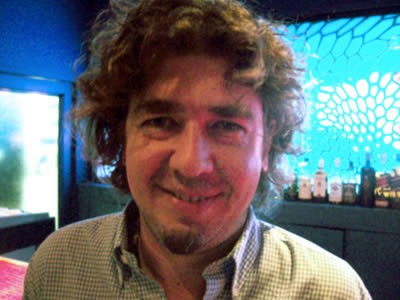 Q: Where did you grow up?

Palermo, but I also lived overseas growing up, in Mexico and Yugoslavia — when it was still one country — and Portugal. Before we opened the bar, I lived in Paris for seven years.

• How did the idea of opening La Cigale come about?

I was traveling in Mozambique and some partners of some partners from the music magazine, Inrockuptibles got in touch. They wanted to start up a bar. I had knowledge about the Buenos Aires scene and knew a lot of people, so that’s how I got involved.

It was quite a big risk. None of us had much money. If it didn’t succeed quickly, we would have gone under in four months. We were lucky because the magazine sent us new bands and that brought crowds and we took off pretty quick.

• What year was that?

Back then there was Mundo Bizarro — they were one of the first, and then the Shamrock, before they had the basement. It was a different scene then.

• Why did you guys decide to open something downtown instead of in Palermo or San Telmo?

At that time I used to hang out at El Seddon, when it was still over in this part of town, and around here were all the brothels. It was an obvious choice because it’s mostly offices around here, so there are a lot less problems with the neighbors.

At that time there still wasn’t really anything in Palermo yet, there was AcaBar and El Unico and in San Telmo there was no night scene at all, like now.

• What kind of music do you like, the stuff played in the bar?

Not really, I’m more into black music. I like ska, reggae, rock steady, dub, like the Specials and Burning Spear. Here we play more indie music.

• You said you also own a hostel. You must work a lot.

Yeah, I own Casa Esmeralda in Palermo. Here we have managers to take care of the day-to-day stuff. I only work two shifts per week here at La Cigale. I’d say I work 65 hours a week in all. Workholic and Alcoholic!

• You must know everybody in Buenos Aires.

I’m pretty social. I meet new people everyday, but it’s interesting that my main nucleus of friends are people I’ve known for over 20 years.

• What are some of he best Argentine bands around now?

• You lived in Paris where tangotronica also got really popular. Do you like it?

• How would you describe the crowd that comes here?

We have a mix. We get workers who come by for after-office and people involved in the music scene come in later.

• Do you see a difference in the consumer habits of Argentines and foreigners?

Yes, foreigners drink more. They get more drunk. Anglo-Saxons have more of a culture of drinking. Compare the bars of Buenos Aires to London or Moscow — the guys get wild, there are fights and stuff. Argentines don’t do that so much.

• What is the most popular drink here?

• You’re so busy with all these projects. How do you do it? Don’t you want to relax sometimes?

My ultimate fantasy in the world right now is to relax, but now is not the moment. I like to get really involved in my projects. I’m not one of those people who starts something and then just leaves it aside and lets somebody else take care of it. I throw myself into things.

• What do you do when you do have free time?

I like to go to Tigre and just chill out. More than anything I define myself as a traveler — I like travel and more travel!

• Who are some of the famous people who have come through the bar?

The Red Hot Chile Peppers. Those three really famous white rappers, what’s their name? —The Beastie Boys, Echo and the Bunnymen. And of course a lot of Argentine musicians — virtually all of them. Charlie Garcia for one. This was Charlie, before he did his “rehabilitation.” He was completely over the top.

One time he came in and my partner, who is French, was working. He didn’t know who Charlie Garcia was. The band finished playing and Charlie gets on stage to take the mic and my partner went up to him like, “Hey drunkard, what are you doing?” He was going to throw him out. Luckily there were other people around who told him, “No, man, it’s cool,” and they explained who Charlie Garcia was.

Who else? Andrés Calamaro — almost everyone.

Yeah, Cerati came by. He’s a real good guy, really cool. He always left good tips and he made sure he paid for his drinks, which a lot of them don’t. They’re just so taken care of in everyday life that they leave without paying – like Calamaro, he just split without it occurring to him to pay the tab!