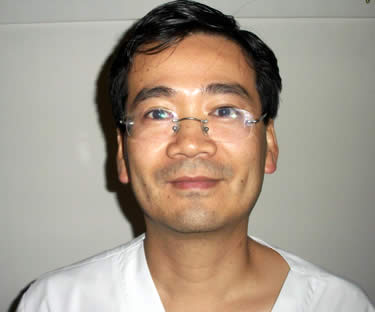 Q: You opened your alternative health center, Salud Nikkei in 2003, why?

• Is your dad an acupuncturist?

• Was he raised here or in Japan?

He was born in Okinawa, but was raised in Argentina.

• They say that Okinawans have one of the longest life expectancies on earth, why is that?

That could be. Maybe because they are happy people — there’s more music, there’s the sea. It’s cultural.

• And the diet is quite good as well?

Yes, they don’t eat much meat and they eat a lot of sea vegetables.

• Why did you decide to open an alternative health center in San Telmo specifically?

Well it wasn’t really intentional. I was going to open an office with another person but he dropped out before it came to fruition and I decided to continue on my own.

With a doctor the location doesn’t really matter so much. I have a lot of patients who come from the province. The distance really isn’t as important as the doctor.

• Have you been to Japan?

No, I’ve had the opportunity to go but I have never been there.

• Have you traveled overseas?

Overseas, no. I have traveled the Mercosur countries: Chile, Pero Paraguay, Brazil, and Uruguay. Last summer we went to Punte del Este.

• Punte del Este? It has a reputation as a fashionable resort.

Just like anywhere there are areas that are more relaxed. The beaches are really nice. It’s like Puerto Madero, everything is new.

• What is the health issue that you see most at the clinic?

Definitely spine problems due to the lifestyle, people have a lot of stress.

• How does the lifestyle here in Argentina adversely affect people, for instance eating so much meat?

Here they definitely eat too much meat, that’s not good because of the cholesterol.

People also get too little exercise, a bit of exercise is very important.

Aerobics, swimming and all the Asian disciplines such as yoga and T’ai Chi are excellent for getting exercise and working with respiration.

•What type of exercise do you do?

I swim, and once in a while I pick up Aikido. I used to jog but I haven’t been doing that lately.

• How many times a week do you exercise?

Once or twice a week.

• The clinic offers chiropractic and acupuncture. What do you say to people who, for instance, think chiropractic is not a legitimate medicine?

It’s completely socially accepted. It deals with disruption of the energy in the body.

In 2001 there was a law passed that recognizes complementary medicines such as chiropractic and acupuncture.

To practice either in Argentina you have to be a licensed medical doctor.

• How can people check to see if a doctor is legitimate?

They can check with AQA (The Argentine Chiropractic Association).

• And how much further study after medical school does one have to do to get certified as a chiropractic?

There are courses that are one or two years.

• And how can someone tell if an acupuncturist is legitimate in Argentina?

• What do you normally eat?

• What are the best sushi restaurants in Buenos Aires?

I like Meshi (Aristóbulo del Valle 1499, BARRACAS) and Sushina (Solis 275, Monserrat). These are on the south of the city there are other places in the north side of the city.

What general health advice can you give to our readers?

Health advice? People should look for equilibrium. Oriental medicine has equilibrium as the goal in mind.

There’s a need to pay attention to the energy in the body the respiration and to eat well.

The life here is stressful. People are running everywhere — even to get from one point of the city to the other can be very problematic and people have to always be alert.

That can be stressful, so there’s a need to keep your shoes on the feet, as we say.

• What do you like to do in your free time?

• Do you drink beer when you fish like many fishers?

Yes, but these questions are too personal.

• Really? Most people want to talk about their family. What did you think Porteño of the Week was about?

I don’t know but when I’ve had other interviews they didn’t ask these types of questions.

• Does this have to do with the paranoia here? Sometimes it seems people are unreasonably paranoid in Argentina.

Yes, it could be a cuento de tio (tall tale). People get all your information and they can use it to commit a crime against you.

• Generally people are very happy to talk about their families, so this seems odd. Do you really think a foreign journalist would be involved in a criminal scam to rob you?

Well no, but I’ve never been asked stuff like that in interviews. I’m a very reserved person.