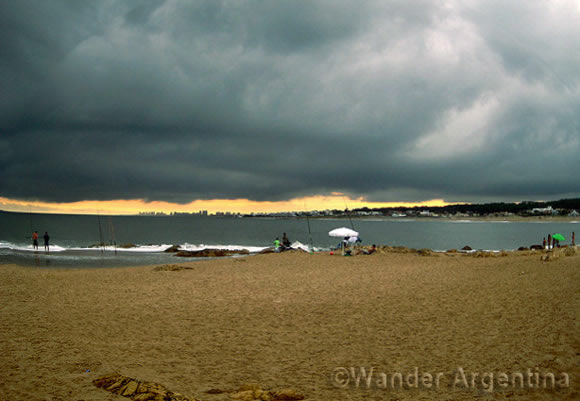 Punta del Este is for vacationing Argentinians what the Hamptons are to crazed Manhattanites. The normally crowded streets of Buenos Aires empty out during the summer months of December through the end of February, and well-heeled Porteños (the people of BA) flock to Punta del Este, a luxurious beach resort located on the southern tip of Uruguay. 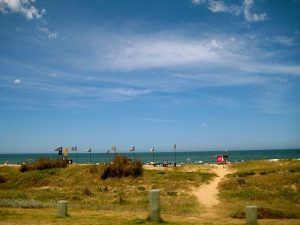 Punta, as those who make the yearly pilgrimage call it, has a local population of only 7,000 but hosts over 150,000 vacationers between December and March.

Elite tourists, bankers, models and jet-setters crowd into house parties with US$200 cover fees, unless you’re on the list.

The land is covered in rolling beach dunes dotted with dark, violet Morning Glories, Grecian style mansions, thatched churches and red pueblos. In Punta, the Porteños sip endless cups of mate while the dogs of the universe roam the golden sandy beaches along the cold, Atlantic Ocean.

Downtown Punta del Este has all of the stores that you would expect to find in a ritzy area such as a glass boxed Converse store with a painted chain link fence on it and several trendy furniture design stores. There is even a ‘MundoMac’ store for the Apple addicts.

On some stretches of Punta del Este expect to drive past shoddy beach shops selling pool chairs and cheap liquor stores that resemble the drive into any scrappy seaside town. But at heart, Punta’s landscape is reminiscent of Martha’s Vineyard, except with palm trees and sexy Latinas. 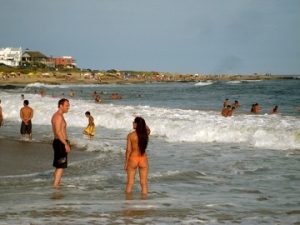 The South Americans exhibiting themselves on Punta’s beaches must have swum very quickly in the gene pool — or have some very good plastic surgeons. The men have the most unbelievably chiseled bodies. The women have perfect, thin arms and round, luscious buttocks that pop out of the sides of their thong bikini bottoms.

There are two types of beach in Punta del Este — the Brava, or oceanside beach, facing the rougher waters of the Atlantic and the Mansa, the more tranquil bayside beach on the western side of the peninsula facing the Rio de la Plata (Silver River). Downtown Punta is built up with high rises, casinos and nightclubs.

There are several areas of Punta each with their own flavor: La Barra with posh restaurants and windsurfing lessons; Manantiales Beach on the Brava side with rough, big waves, perfect for surfing; the aptly-named Bikini Beach; El Tesoro, or ‘Treasure Beach’ and Montoya Beach, popular with the young VIP’s of Punta. 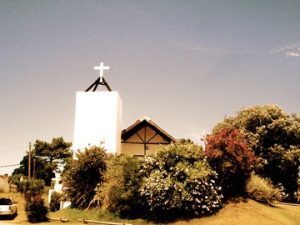 The light is so radiant in Punta it can be confusing. Once the sun is down and you’re ready for dinner, it is 10pm.

Baby Gouda, a lovely restaurant on the main drag in La Barra is typical of trendy restaurants in Punta, including the fact that it’s only open for three months of the year. The ‘boutique-gourmet’ food they serve up provides a charming respite from the abundant steakhouses in the area. Here you’ll dine on Mediterranean fusion cuisine under Moroccan lamps while lounging on velvet couches near the beach. If you’re more interested in the atmosphere than calories, you can skip the food and go there earlier in the day for their 2×1 happy hour and a superb cheese platter. For the full effect, you can even huff on a hookah or catch a flamenco show.

In Punta del Este expect New York City prices. No where else in the developing country of Uruguay will you pay US $15 for a drink, as you will for a delicious Pisco Sour at Sipan, one of Punta’s hippest spots, a trendy Peruvian restaurant where it’s considered a sin to eat rice with your US$25 ceviche.

A Pisco Sour is similar to a whiskey sour but with a hint of key lime pie. It is a Peruvian cocktail (although the Chileans claim it as their own too) containing pisco liquor, lemon juice, egg whites, simple syrup and a splash of bitters. If you want to take a pass on the pisco, Sipan offers eight excellent handcrafted beers and a nice selection of Uruguayan Wines – something you won’t find at the restaurant’s original Buenos Aires’ location.

To escape the bustle of downtown Punta take a trip to the little pueblo of José Ignacio, 40 kilometers north of the city center. Not to be missed here is the beautiful and delectable seaside restaurant, Parador La Huella, where you can eat perfectly–grilled seafood right on the beach while the setting-sun silhouettes the celebrated Jose Ignacio lighthouse, for which the little beach town is named. While there, you can take a Sunset Wine & Cheese Tour.

The flight to Punta del Este from Buenos Aires, Jorge Newberry airport is 45 minutes and cost about US $350. A cheaper route is to take the BuqueBus, which includes a 2-hour ferry ride to Montevideo or Colonia and then a 3-hour bus ride to Punta del Este, for a total cost of about US$150. Be sure to hit up an ATM before arriving in Punta, as the one or two in the city often run out of cash.

→ Read about renting a car in Argentina and Uruguay

1 thought on “Punta del Este: Glamor by the Sea”