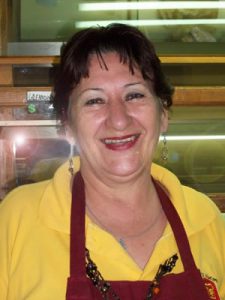 Q: How many times a week can you eat media lunas (sweet croissants) or facturas (pastries) for breakfast and not get fat?

This, I don’t know, but there are people who eat them everyday. They do make people fat — it’s not diet food, but I tell the clients that they’re low-fat just to make them feel better!

• How long have you worked here?

I’ve worked here since we opened in this location in 2005, but I’ve known and worked for this family for over 40 years. Three partners — two brothers and a nephew own this business, but I worked for the brothers’ dad in a bakery in Belgrano beginning when I was 16 years old.

Then for about 20 years I sold clothes in businesses and I had five people working under me. I made good money but it was tiring after a while. I like this better.

• How are the people different from when you started 48 years ago?

Oh my! Before people had good manners and respect, these days that doesn’t even exist. And you might think it’s just the young people but the old people are rude too! They have a bad day and they take it out on us.

The other day a 70 year-old man yelled at me because the price of bread went up. Like it’s my fault that the government increases the cost of wheat! I think the people should say good afternoon, please and thank you. I mean, we’re polite so the people should be too.

• Why do you think the people are ruder than they used to be?

I don’t know. It’s not just the way people raise their kids because the adults have bad manners too, but I do hear mothers saying, ‘I want my daughter to treat me like a friend.’ Your daughter should never be your friend! My daughter certainly does not talk to me like I am her friend; I deserve more respect than her friend.

The foreigners are generally more polite even though I don’t get why they buy one cookie at a time.

• There was a police officer hanging out in here but you said that they didn’t do anything when the bakery got robbed, what’s the story?

For me, the cops are just as corrupt as the crooks. This cop comes and talks with us for a while, it’s safer while he’s in here, but I don’t trust the cops. The cops and the crooks work together. I’m not saying ALL police, but the majority.

It’s like a priest, you know one nice priest and you are fond of them and then you hear about all these priests molesting children. What are you suppose to think? I don’t trust doctors, judges or politicians either. What does a president do? We vote for them and they get into office and then they stuff their pockets and forget what they promised us. I don’t know what’s happening with the world. It’s like corruption is a contagious infection.

• It seems that you give a lot of free bread out here. What’s the policy on that?

We give out bread to anyone who asks. Alicia, my co-worker, is in charge of bagging up the bread we give away. We give bread to kids and old people, and right up the street here there is a hotel for juvenile delinquents without families. They come and ask for bread quite a lot. We give it to them so they don’t rob us. So we give bread to everyone— even the crooks!

Well no, they don’t rob us, they just send other people to do it.