Plaza Dorrego, at the corner of Defensa and Humberto Primo, at the very heart of the San Telmo Fair, is the capital of tango as a commodity in Buenos Aires on Sundays.

There is often a tango performance here, but once you push past the crowds to see what’s going on, you may wonder what all the fuss is about. An older couple who dance tango here dance a typical salon-type tango and have certainly earned their stripes. They dance on a very tiny platform and display subtle moves that the young flashy dancer haven’t yet finessed.

If you really aren’t interested in tango but are obliged to get a picture to show your tango-crazed aunt, head to this intersection to get a quick snap. 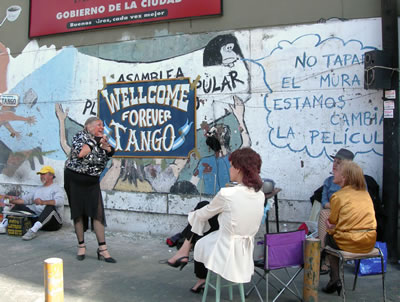 All around San Telmo on Sundays you may stumble across ‘tango posses’ staging spontaneous milongas (dance gatherings) in any given public space. Often there is a group of dancers on the corner of Defensa Street and San Juan Avenue.

Every other day of the week besides Sunday during the day, there is usually a live performance in Plaza Dorrego by anyone of a number of professional duos who perform for tips.

The best place to catch some tango dancers who can really get across the floor on Sundays in San Telmo is directly in Plaza Dorrego. After the antique vendors have closed up shop, the ‘Milonga of the Indian’ takes place in the plaza. Founded by Pedro Banavente, known around town as ‘El Indio,’ this outdoor dance in the plaza has existed for over 20 years.

Usually there is a performance followed by an open dance where you can join in, if so inclined. Tango is the main feature here and sometimes there is a bit of Chacarera, a northern Argentine folk dance that is fun to give a whirl.

Due to a conflict with surrounding businesses and neighbors, the Plaza Dorrego milonga has been shut down a few times in the last years, but the dancers have succeeded in getting at least moral backing from the city government. The outdoor dance was coined as one of the ‘City’s Best 20 Milongas’ by the city’s Culture Secretary.

Organizers are now fighting to receive ‘cultural interest’ status that will further protect it from being shut down in the future.

Tangodromo is a milonga that used to be an option on Sundays in San Telmo, but is now in another traditional tango neighborhood, Boedo. Nevertheless, this is considered one of the most important milongas in the city and it is definitely authentic — you won’t bump into many tourists here. For more than a decade the same teachers, Julia y Emiliano have lead classes in this milonga. This is a good option for beginners and those with kids in tow. It is easy to get there from San Telmo, just hop on the E line of the subway to Boedo stop or take bus 126. 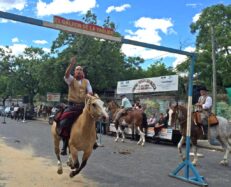 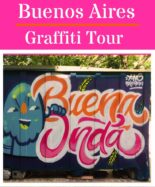 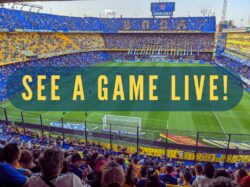