The six lines of the Buenos Aires subway are a breeze to negotiate compared to the complex bus system. Follow this step-by-step guide to learn how to speed to your destination underneath the city: 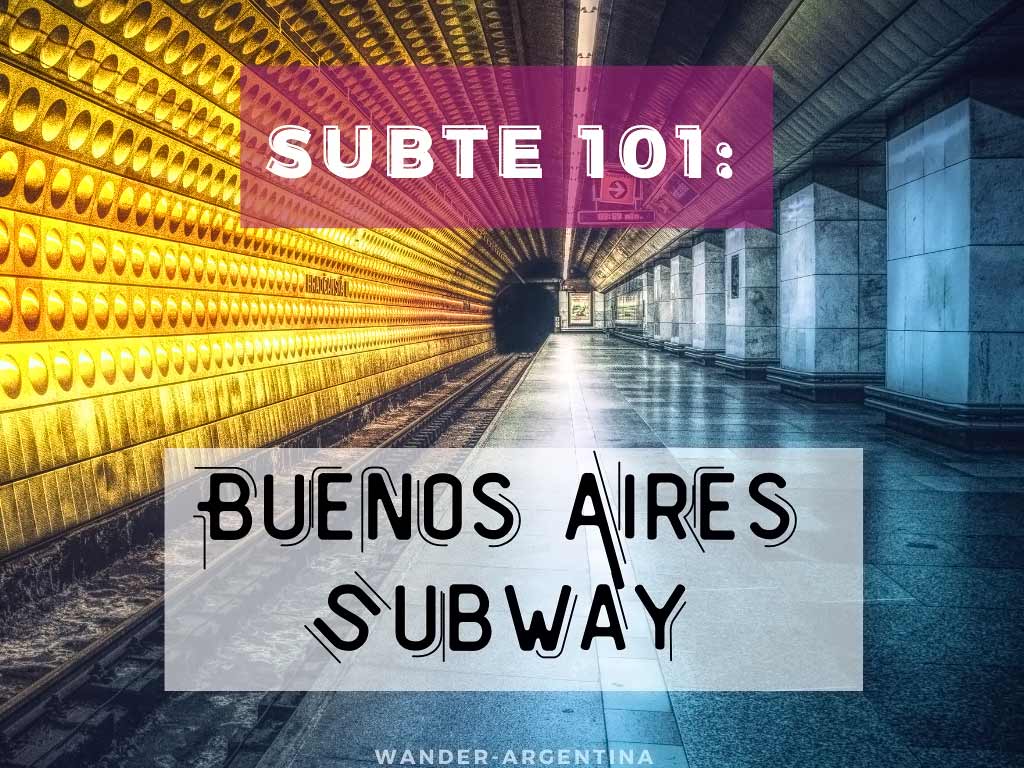 Figure out your route

To decide which line you can check a subway map on the internet (includes an app),  or if you don’t feel comfortable with the risk of pulling your phone out in public, subway stations also have a map at street level, though they are usually above eye line and difficult to read. For a clearer map, go down into the station, where there is one on the wall at most stops.

While some station entrances lead to a station hall and both platforms, others lead to just one andén (platform) and trains going in just one direction. If you accidentally go through the turnstile to the wrong platform, you won’t be able to retrieve your fare — unless you convince a subway worker to take pity on you.

To figure out which entrance you want, find out the name of the station at the end of the line in the direction you’re traveling in, and look for signs that say ‘trenes a + that station name’.

For example, if you are entering the D line at Bulnes stop and want to go to Olleros you need to go in the direction of Congreso de Tucumán.

Entrances that say salida unicamente, are exits, walk across the street to find an entrance.

A ride to anywhere in the network usually costs about the equivalent of about 30 US cents, with the price going down after a certain number of trips.

There are no longer paper tickets available, so visitors will have to purchase a Sube smart card in one of the city’s tourist centers or a kiosk (street-side convenience store).

Sometimes there is a sube card shortage, so buying one when you come at the airport isn’t a bad idea.

The sube card is a re-chargeable electronic card which can be used on the subway, buses and trains in and around the capital.

The SUBE cards can be charged at subway stations and other places that display the SUBE sign, usually kiosks. Sometime places just sell the card but aren’t able to put credit on it, so you may have to buy the card and then go find another kiosk to charge it.

Once you do, simply hand over the amount you want to charge up, put your card on the reader and wait for your credit to be uploaded. or click here to see a map where you can purchase a Sube card in any part of Buenos Aires.

To charge your Sube card, go to the boletería (ticket office), put your card against the card reader, and tell the vendor the amount you would like to put on the card. ‘¿Me recargás cien por favor?’ would be, ‘Can you put 100 pesos on my card please?

If Argentine Spanish is not yet your forte, handing over the money and holding up the card to the reader will likely have the desired effect.

Going through the turnstile and onto the platform

The sube card is simply swiped on the turnstile’s card reader to gain entrance to the station.

Once you’ve heard the beep that states your card has been charged, head through the turnstile, onto the platform and wait.

As the subway is warm all year round and sauna-like during summer, it’s advisable to take off any unnecessary layers of clothes before getting on the train.

If you’re riding the subte in November-February, seek out the nearest fan while you wait, a window while you ride, and be prepared to sweat for the duration of your journey.

Getting on the subte 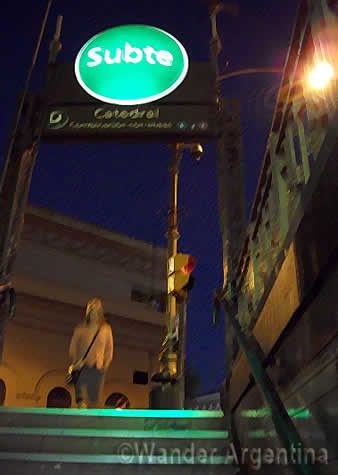 Depending on the line, time of day and the mood of those around you, you may have to push to get on the subte.

This is common at rush hour, where hoards of commuters squeeze themselves into packed carriages.

The etiquette of getting on the train also varies depending on the subway line.

On ‘polite’ lines, such as the línea D, passengers wait for others to disembark, before getting on themselves.

If you’re traveling on less-civilized lines, like the C or E,  you may have to adopt the local technique of barging as forcefully as possible to get on or off the subway train.

Try to head into the carriage rather than standing by the door.

Those lingering near an exit will be perturbed by a constant stream of people asking ‘¿bajas?’ – are you getting off? This is the porteño way of inquiring whether it is necessary to push past you to get off the train.

Priority seats should be given to the elderly, pregnant women and also children, who often sit down while their parents stand.

If you don’t get a seat, be sure to cling onto one of the handholds or rails, unless of course you’re looking for an excuse to ‘accidentally’ fall into that sexy Argentine standing next to you.

To switch lines, once at the connecting station look for signs that say ‘Combinación con la linea…’ plus the line you want to change to.

Make sure that you’re following the signs for trains in the direction you want to go, this can be particularly confusing when changing at the main intersection (9 de Julio/Diagonal Norte/Obelisco stops) in the city center.

Don’t be shocked if a vendor comes onto the carriage and drops their wares into your lap.

Articles on sale range from exactly the sort of thing you might want to buy on the subte, such as tissues, chewing gum, and tourist guides, to prayer cards and bizarre gadgets.

If you want to buy the item, pay the seller as they come round to collect their goods. If you don’t, simply hand it back.

Small children may also come up and offer their hand or cheek to you by way of greeting. They will then give you a slip of paper outlining their miserable life circumstances, or a small card or object.

These items mean they want money, although food is often welcome.

Other people will simply walk the carriage, telling their tale of woe and holding out a money pot.

Performing music in subway platforms and in carriages is legal, so plenty of buskers try their luck.

Subte performers range from small children juggling or warbling out tunes to professional-looking musicians (as seen in this youtube video) with portable amps and three-piece bands.

Performers usually expect a round of applause, and then pass round their hat for ‘quien desea colaborar’ (anyone who wants to donate).

Safety on the Buenos Aires Subte

Passengers should always keep a close eye on their belongings to keep safe in Buenos Aires. Adopt the local habit of pulling backpacks towards the front, carrying purses across the shoulder and placing wallets in the front pocket.

Do not carry objects of value in easily reached pockets or easily opened bags. Flashy phones or cameras should be kept hidden and used discreetly.

Be aware of those around you, a coat strategically placed over the arm of a shady looking passenger may well be cover for the work of light fingers.

According to a study put out by Metrovías, the privately owned company that operates the subway, the B and C lines are the least favored by porteños, but they have improved considerably in recent years.

Now that most stations have security cameras, many residents say they feel safer taking the subway than the bus.

Getting off the subte

Note that only the subte stops with connections to other lines are announced on the train’s speaker system. An electronic screen on the C line announces the next station, but on other lines passengers have to watch out for their stop.

On busy carriages, it’s advisable to head towards the exit before the train stops. Along the way, be sure to say ‘permiso’ (excuse me) as you work your way toward the door.

If someone is blocking the exit, say ‘¿bajas?’ (are you getting off?) They will let you pass if they are staying on, if they reply ‘si’, (yes) wait behind them.

There’s no need to show or swipe your ticket to leave the station, as with the trains.

Look for the – salida (exit) sign and note that the each exit is labeled according to the streets above it.

• If you do stand near the door or an open window, be careful using your cellphone — sometimes they are snatched

• Don’t diddle doddle on busy platforms too much, just move with the people

• Wear good deodorant in the summer when you’ll be smashed up against people in sweltering temperatures. Hopefully fellow passengers will have the same courtesy!

→ Read about using an Uber in Argentina or about driving and renting a car.