In Patagonia’s hills the quiet is broken at regular intervals by the piercing whistle and familiar chugging of the Old Patagonian Express. 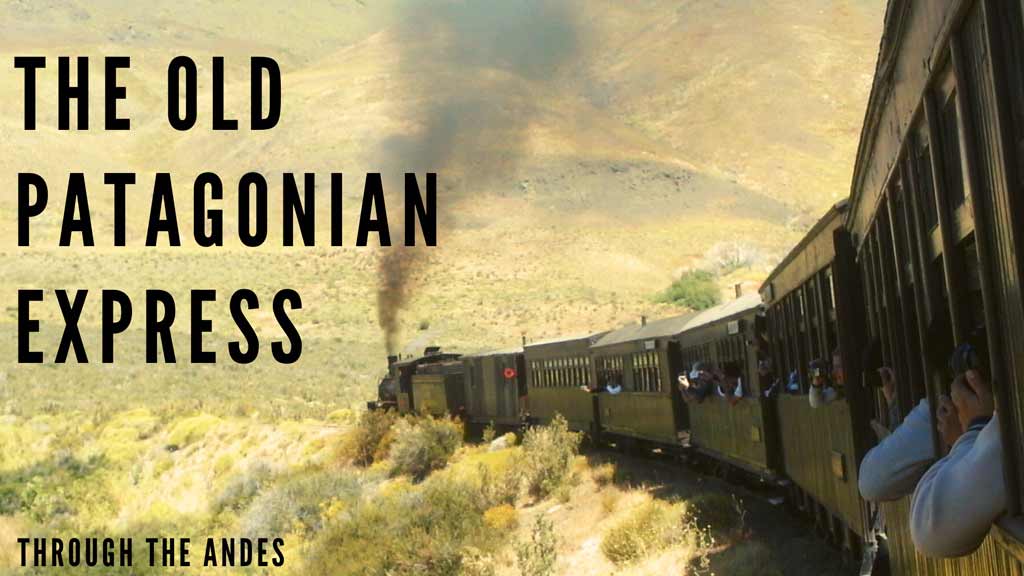 Affectionately called La Trochita by locals, (which translates to ‘narrow gauge’), it appears as aged as the surrounding foothills.

In a country whose train industry withered away decades ago with the development of paved roads, El Viejo Expreso Patagónico remains one of the last operating working narrow-gauge locomotives in the world.

The steam locomotives are still in use and celebrate their centennial in 2022.

Advertised as ‘a journey through the landscape and time’ this historic steam engine train ride serves principally as a tourist attraction today.

Cherished by Esquel’s residents and surrounded by the rolling hills of the Andes, the Old Patagonian Express still attracts tourists from across Argentina and the world.

To catch the train travelers need to head to the outskirts of Esquel, a tranquil town in the heart of Patagonia’s Chubut province, the southernmost stop on La Trochita.

As this ‘little engine that could’ splutters and wobbles along, it retains a defiant majesty despite its countless years of service.

The paint on the 1922 engine is parched and cracked from decades of exposure to the diffused Patagonia sun and dry wind.

The well-worn track, with a gauge just 75cm wide, covered in dust and sprouting grass, looks like something out of the Wild West.

The original Belgian carriages remain too.

In the center of each cabin is an original wood-burning stove, traditionally used to heat the cabin and warm water for the popular habit-forming local beverage, yerba mate.

The uncomfortably rigid wooden chairs serve as a reminder of this train’s authenticity.

A battered beast, this train has fought off the elements, accidents and several attempts at closure through the years.

Today it provides one of the world’s most famous train journeys and arguably South America’s finest.

The journey is like a time machine highlighting Argentina’s past prosperity, when steam trains made way for increased industry and settlement along the foothills of the Andes.

The Railway Line that got Left Behind

At the time of its construction, the Old Patagonian Express line was intended to form part of a planned rail network across Patagonia.

Although the project to connect the area to Bariloche and beyond was launched in 1908, it was subject to numerous setbacks and supply difficulties brought on by the onset of the First World War.

Construction began in 1922 but progress was painfully slow and by 1945 the track still only reached Esquel.

It operated as a freight service bringing supplies, helpful in areas where roads are often blocked in winter.

Passenger service on the Old Patagonia Express only began in 1950.

La Trochita’s service declined throughout the 1960s and 1970s.

Despite mismanagement, the train journey was popularized by Paul Theroux in ‘The Old Patagonian Express,’ his 1979 book of the same name.

Theroux (father to Louis Theroux, the BBC broadcaster) decided one snowy winter to travel from his home in Boston as far as he could by train.

His book recounts his journey across the United States, through Mexico and Central America and along the Andes Mountain Range until its conclusion in deepest, dustiest Patagonia.

Theroux calculated that the tracks finally ran out in Esquel.

‘It was fueled by oil, so it did not belch black smoke, but it had bronchial trouble, respirating in chokes and gasps on grades and wheezing oddly down the slopes when it seemed out of control’

Once off the train in Esquel, so ended his journey and with it the final chapter of the book.

Despite its fame, in part a result of Theroux’s book, the unprofitable line was closed in 1993.

It was only after a strong public outcry was saved from extinction by the local government, which operates the line today, albeit on a limited schedule.

In 1999 the train line was declared an Argentine National Heritage Site.

Such is the popularity with the nearby townspeople, that they still wave each time La Trochita passes.

Getting tickets to ride the train can be a challenge.

The schedule changes according to the season and unfortunately The Patagonian Express has developed a reputation as being unreliable.

Traditionally the Esquel to Nahuel Pan trip runs Tuesday, Thursday, and Saturday at 10 a.m. and returning at 12:45 p.m. depending on the season.

Currently the train offers special trips for groups, and occasional journeys from Esquel and less frequently from El Maitén, near El Bolsón.

A more substantial 406km journey is sometimes offered from the town of to Bruno Thomas Pass 55km away.

Saturday morning in Esquel is the most likely time and have the opportunity to climb aboard the historic train.

La Trochita is a slow-traveler backpacker special because the most surefire way to get tickets is to purchase them in advance, in person at the ticket office.

Simply show up to see if the train is running, you can also try to double check details over the telephone, if anyone answers (don’t forget there’s a siesta in these parts).

The official website is up and running again but the information can be at odds with what the stationmaster has to say in his authentic wooden ticket office at Esquel station.

The Journey to Nahuel Pan

The train is stationary for fifteen minutes before departure, allowing spectators time to take in the sight as well as a lungful of the characteristically thick steam-engine smoke as the train gets ready to depart.

For most, a ride on La Trochita will entail a trip meandering from Esquel through the hills to the village of Nahuel Pan 22km away.

The journey from Esquel itself takes almost an hour, with the train rumbling along the tracks and affording excellent views of the vast Patagonia landscape rounding many broad bends in the track.

Much of the land through which the route travels is part of a vast estancia, an Argentine ranch.

A herd of horses might playfully gallop alongside the train, and the journey affords the ability to spot other Patagonia wildlife, including packs of llama-like guanacos, ostridge-like rheas and occasionally, condors.

It is fitting that Paul Theroux championed in his book of the same name the importance of the journey itself, not the destination.

The little pueblo of Nahuel Pan is an underwhelming, sparse place to arrive.

The torta fritas, ‘fried cakes’, are very similar to a doughnut without the jam and are a delicious treat.

A tiny museum offers an exhibit on the history of the area and its native Mapuche inhabitants who now have ancestral rights to areas further north.

The highlight of the Nahuel Pan stop is getting a look at the pair of disused trains resting beside the tracks.

It is a sad sight to see these formerly imperious engines, brown with rust, lying dormant and slowly being eroded by the Patagonian breeze. But they are fascinating objects to inspect close-up and pose for a photograph with (bonus points for those clutching their copy of Theroux).

El Maitén, 160 km from Esquel was once the focal point of the mythical Argentine Railway industry.

This small town of 4,000 inhabitants located in Northwest Chubut, where the mountains begin to give way to the steppe.

Originally a agricultural enclave of pioneers, the town was transformed with the arrival of the train.

For many years it contained an authentic community of raucous railwaymen, like those who used to inhabit Alemanía much further north along the Andes.

When operating, the tour from El Maitén starts at 2:00 p.m. and includes a tour of the locomotive repair shop.

The train ride then moves through the El Maitén valley and lasts one hour and reaches the limit of the Río Negro province.

The train stops on a bridge over the Chubut River allowing for stunning landscape photos of the town.

There are plans to extend the La Trochita journey to the end of the line at Ñorquinco and Ing. Thomae but financial incentive is lacking — this is one corner of the world that is not yet overrun with tourists.

The last word should go to Paul Theroux, who after his journey on board ‘La Trochita’ in the 1970s noted,

‘The engine looked derelict, as if it would never run again – but it had a hundred more years in it, I was sure.’