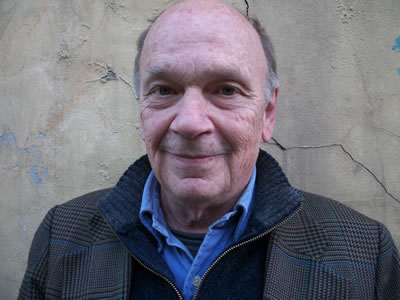 Q: What do you enjoy about being a professor and tour guide?

Teaching is part of my soul; it brings me a lot of pleasure. You can see it in me when I talk that I am very passionate about it.

• You’re a professor of architecture, which neighborhood in Buenos Aires has the best architecture?

San Telmo, but it’s merely by coincidence. It’s not that it was purposely preserved. And after San Telmo, it would have to be Recoleta.

I’m once divorced and once widowed and I have two sons who are 28 and 29. My oldest son is the ultimate yuppie, he works for a corporation but he has the soul of a musician.

• What are your hobbies?

I’m a pianist and I play golf —those are my two addictions.

• How is Buenos Aires for golfers?

It’s quite good. It’s the only city in the world that has two public golf courses. We have the luxury of 40 hectares of golf right inside the city, which is something that is quite rare.

It’s about in the middle. It could be lower if I worked on it but I don’t play that much.

• And how long have you played piano?

I’ve played since I was five years old.

• Was it common then to send children to piano lessons when you were growing up?

Yes, I came from a family that was quite comfortable so as a child I studied piano, French, English and we had a nanny— everything.

• So when you were a little kid Perón was in power?

Yes. I lived in Recoleta, near the house of Perón, which is now the location of the National Library. It wasn’t the official residence— the presidential palace is in Olivos as it remains today, but it was where Juan and Eva Peron stayed during the week. I remember being five years old and passing by the house and seeing all the candles people had left when Evita became ill.

•You are obviously interested in the preservation of the beautiful buildings of Buenos Aires, what do you think of Buenos Aires’ most modern neighborhood, Puerto Madero?

Puerto Madero was a good development because it was a landfill and an abandoned port. Form the point of view of preservation of the neighborhood what they did there was good because people pay quite a lot to live in a those tall residential buildings and that allows there to be more public space for people to enjoy.

• It’s an interesting contrast with the slum right next door to Puerto Madero, there’s quite a mix of people around the Costanera Sur.

Yes, it’s the same way in my neighborhood Retiro, where we have a Villa 31 {Buenos Aires largest slum} right next door. Most of the residents there are immigrants.

• You mentioned that Palermo has something of a preservation movement among neighbors to conserve the historic architecture. How are they doing?

Neighbors do organize and work to preserve historic buildings but they don’t have much power up against the corporations who want to build in the area.

• What are some of the most striking changes you’ve observed in Buenos Aires over the years?

Something that has changed a lot since the ’70s was that there was a real estate explosion and there was plenty of credit available at that time. I was able to buy an apartment with some money I had saved and also receive credit from the bank. Now it is very difficult for young people because the banks don’t give out credit so they are forced to rent.

Also with all the people coming to Buenos Aires there are a lot more cars on the road. You used to be able to find a place to park. Now having a car in Buenos Aires is a big headache! As it is I owe $2,100 in fines for parking violations. I have 18 or 19 infractions to pay. The day they tow my car I’m going to have to pay all that at once.

Even if you travel by bus there’s so many cars that you don’t get anywhere fast. Buenos Aires has just grown so much and the transportation hasn’t kept up. So the transportation issue is the most bothersome thing because it lowers the quality of life.

• It seems like mayor Mauricio Macri has cracked down on folks for a lot of everyday violations.

Yes, Macri is stricter. He’s a moron. He got there because that’s how the cards were laid out for him. It was fate more than his own effort that landed him where he is.

• So for many he could he be characterized as the George Bush of Buenos Aires?

Yes. Bush encompassed everything that the people dislike about the U.S. Obama is very well liked though. People get the feeling that things will change under him.

To request a tour with Eduardo write booking{a}wander-argentina.com or send us a message via our contact form. Also check out our list of city tours and day trips from Buenos Aires.