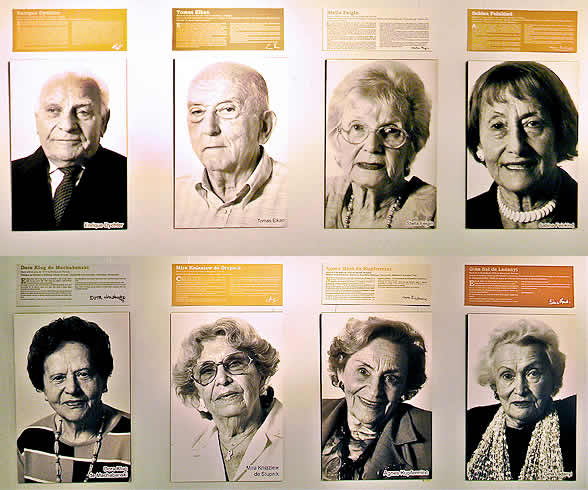 The Buenos Aires Shoah Museum, the only of its kind in Latin America, serves as a museum, memorial and moral reminder by telling the story of the Holocaust and its impact in Argentina and wider South America.

The museum is supported through the Holocaust Memorial Foundation, and was declared a ‘Site of Cultural Interest’ by the city of Buenos Aires in 2006.

Under the slogan, ‘To remember is to avoid repeating history,’ the foundation’s mission is to keep the memory of the Holocaust present, honor those lost and to serve as a poignant reminder of the atrocities that can stem from racism and xenophobia.

The Museo de Holocausto of Buenos Aires is set in a spacious red brick building in Recoleta.

The main entrance way and exhibition space is appropriately dim, illuminated mostly by the natural light of the courtyard that adjoins the museum’s two primary gallery spaces. 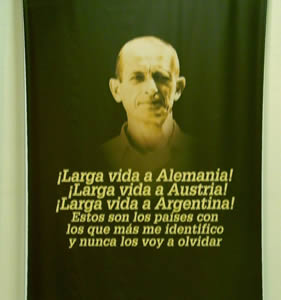 The first exhibition space is devoted to temporary exhibitions.

Past shows includes; ‘Adolf Eichmann: ´El vivío entre nosotros’(He lived among us), which documents Eichmann’s journey from top SS official’s to middle-class Argentine to Israeli prisoner; ‘Visados para la libertad,’ (Visas for Liberty) an homage to the Spanish officials who helped Jews flee Europe; and 2006,’s ‘Darfur. Genocide emergency,’ on the modern-day massacre in Sudan, a loan from the Washington Holocaust Museum.

The second gallery space holds the permanent exhibition, documenting the Holocaust through a written timeline.

The chronology maps the event from the rise of the Nazi party to the fates of both the perpetrators and the survivors of the Holocaust at the close of the war.

Many parts of the timeline have a panel that reads, ‘Meanwhile, in Argentina…’ which covers, among other things, Jewish immigration to Argentina pre and post World War II, as well as the reactions of Argentines to Jewish persecution in Europe.

These doses of Argentine perspective provides context for this country’s role as a land that attracted numerous refugees and contains Latin America’s largest Jewish population, but also allowed Nazis to settle here after war.

Among the artifacts, are the fake Italian passport used by Aldof Eichmann to enter Argentina in 1950. The passport was a fairly recent discovery — Federal Judge Maria Servini de Cubria came across a record containing it in her court’s files in 2007, and subsequently gave it to the museum for its preservation and safekeeping.

In 2019 the museum took custody of the largest collection of Nazi artifacts to ever be discovered in Argentina.

A collector in Buenos Aires was discovered to have more than 70 Nazi artifacts in a house raid.

The collection included a bust of Adolf Hitler’s head, children’s toys emblazoned with swastikas and a bizarre instrument meant to measure people’s head to supposedly determine their ‘racial purity.’

The items were most likely brought to Argentina by Nazis escaping to Argentina to avoid prosecution in Germany after World World II.

The collector faced criminal charges for having possession of items of illegal origin.

While the escape of hundreds of Nazis to Argentina isn’t glossed over, the Holocaust Museum’s emphasis is placed on the legacy of survivors.

Large portraits of survivors who rebuilt their lives in Argentina are accompanied by their personal stories, giving testimony to the power of the human spirit. 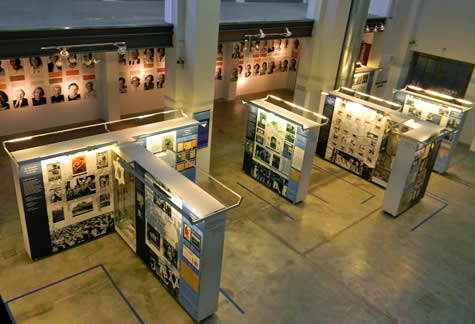 Polish-born Jew, Moises Borowicz, was one of four Holocaust survivors out of the 280 members of the Borowicz family.

When he came to Argentina in 1947, the country did not permit the entrance of Jews looking to stay in the country. Borowicz was denied immigration rights and given the equivalent of a tourist visa.

The visa notes that he was of Semitic origin and stamped onto the paper is an image of the Star of David. The visa is not unlike documentation a Jewish person in German-occupied Europe would have held during the Holocaust.

The only space in the museum set apart, by way of glass doors, is a small memorial.

A list of the most prominent death camps is written on the ground, and the names of victims are inscribed on a gold plaque on the wall.

Small stones stand beside the plaques; visitors following the Jewish custom of placing stones to build a monument to honor the dead have placed them there as markers of remembrance.

For more than 30 years the museum has published a magazine entitled ‘Nuestra Memoria,’ which provides historical cultural analysis of the Holocaust and its consequences.

The museum also has a library of over three thousand volumes of Holocaust-related literature in Spanish, German, Yiddish, and Polish.

Guided tours are available with prior reservations, and are recommended for those who don’t speak Spanish.

Activities at the museum include conferences, film showing and debates, check the website for details. 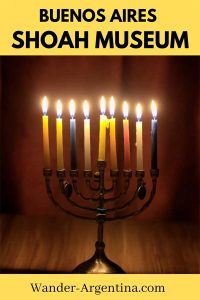 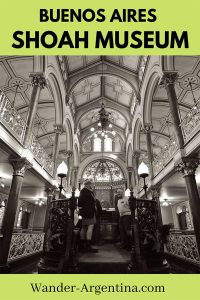 • Visitors are required to show identification before entering the museum