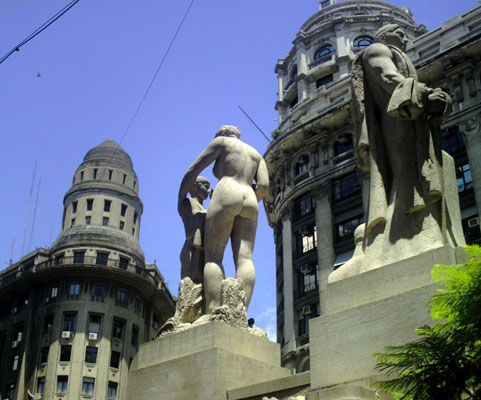 Across from Diagonal Norte’s Bank of Boston is the Equitativa del Plata building designed by Alejandro Virasoro.

Visoro was one of Buenos Aires’ most prolific architects during the 1920’s and had a long career reaching into the early 1960’s. Although somewhat dull compared to surrounding offices, the building, at Roque Sáenz Peña 550, is impressive in a modern context with its ‘telescopic’ Mesopotamian-style top dome.

After its 1929 completion, residents heavily criticized the building for it’s modern, art deco design that represented a departure from Buenos Aires’ more lavish architecture of the era.

Writer, Jorge Luis Borges commented on the style saying, “In order not to betray the intimacy of bad taste, Virasoro’s reticent little crates hide out in bare abstention.”

Ordinary citizens joked that the building could be characterized by a popular film at the time entitled, ‘Sin Novedad en El Frente’ (without anything notable on its face), referring to the Spanish title translation of the film, ‘All is Quiet on the Western Front’.