Almagro, a neighborhood which borders no less than eight other neighborhoods, is often overlooked by tourists.

It therefore remains an unspoiled, authentic and appealing slice of middle-class porteño life.

It is safer than San Telmo, less pretentious than Palermo, and centrally located.

It also borders more lively neighborhoods such as Once and Abasto and Caballito.

Almagro is a high-density sector where everyone knows their neighbors.

It’s chock-a-block with everyday specialist shops, grocers, butchers, hardware stores, toyshops and launderettes as well as a multitude of cafes and ice-cream parlors. 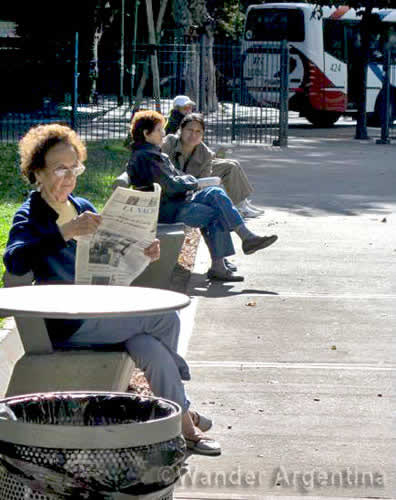 Enjoying the sun in Plaza Almagro

While drab in spots, a huge flower markets on Acuña de Figeroa street gives the neighborhood a splash of color.

Here, gossiping neighbors catch up on corners, old ladies cluster round vegetable stalls to complain about the price of tomatoes and folks of all ages share the national drink mate in the main plaza, Plaza Almagro.

Nearby universities mean that Almagro is the barrio (area) of choice for many students.

Catering to the student crowd are trendy bars and cafes, many of them clustered around the happening corner Guardia Vieja and Bulnes.

In recent years, new establishments have moved into Almagro, cemented the area’s reputation as one of Buenos Aires’ most liveable and up-and-coming barrios.

History of Almagro: The Early Years

Almagro was once merely an extension of the San José de Flores neighborhood and was fertile, green and full of orchards and farm animals.

Spaniard, Juan Maria Almagro y de la Torre bought 18 hectares of land in 1839, which was enough to get the area named after him.

His family’s quinta, or country house was on the corner of Medrano y Rivadavía, where the historic cafe, Las Violetas stands today.

He also donated the money to build Almagro’s first train station in 1857, which ran along the first railway line in Buenos Aires, inaugurated that very same year.

This was crucial for the growth of the barrio and the train line ran for 30 years before it was closed.

Later, a tramway run by horses on what is now the corner of Medrano and Corrientes, further increased connections with the rest of the capital.

The continuation of Medrano is the main street of Castro Barros, which was once one of the most important thoroughfares in Buenos Aires.

The street was then referred to as ‘camino a los huseos’ (road of the bones) because carts that passed by coming from the slaughterhouses often left a trail of animal bones behind them.

These days, this avenue is populated by buses and high-rise buildings and thankfully, any signs of animal remains are long gone.

In 1870, Almagro’s land began to be sold off by the firm Rodríguez, Larrosa y Cía.

As a yellow fever epidemic hit the center of Buenos Aires many of the upper class moved into their country houses in Almagro in an attempt to escape the fever.

It worked, and many of these families are still in the neighborhood, generations later.

Another large wave of mostly Basque and Italian immigrants arrived in the area between 1895 and 1914.

These groups lived in large conventillos (immigrant hotels), which soon became notorious for noisy late night scraps between residents before the neighborhood ceded to the middle class.

Along with the second wave of immigration to the neighborhood came tango.

Buenos Aires favorite tango singer Carlos Gardel, who lived in neighboring Abasto, first sang to an audience in an Almagro bar — a fact many in the barrio will recount proudly.

He also recorded a 1930 tango song, Almagro as a love letter to the neighborhood.

Although the tango legend was killed in a plane crash in 1935, his spirit lives on in Almagro.

There are various milongas (tango halls) in the area.

The Fundación Casa de Tango, a tango house with live music and dance classes founded in 1967 is on Guardia Vieja street near the corner of Medrano.

The foundation promotes the role of tango in porteño life, and offers shows, classes and seminars.

The Arts in Almagro

Almagro has long been bursting with creative types, aristocratic literari and political activists.

The historic cafe Las Violetas is famed for the notable figures who used to gather here.

Although more touristy today, the coffeehouse still holds a certain air of prestige, and, as with other cafes in the city, it’s entirely possible that the next breakout novelist may be seen scribbling in the corner.

Almagro also has an abundance of small, independent theaters referred to as ‘teatro under’ or alternative theater.

These theaters, music venues, cultural centers and bars mean that wandering around the barrio it is easy to stumble upon crowds of people gathered in small spaces for live music, acting, poetry, photography or even stand-up comedy.

For those living in the neighborhood, cultural centers and schools offer courses in skills as diverse as clowning, agro yoga, Arabic dance and sculpture. —Rosie Hilder