Buenos Aires is a lively metropolis, but it has a spooky side. 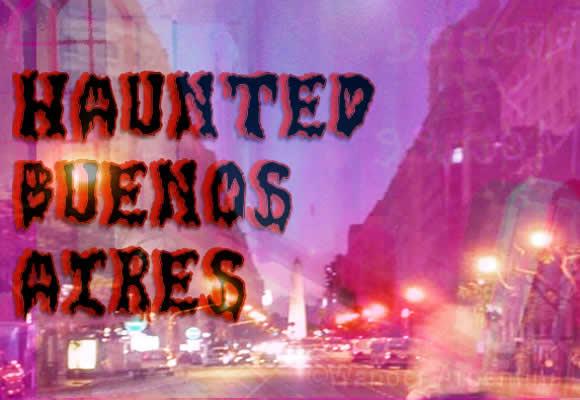 After all, one of its main tourist attractions is a VIP cemetery, parts of the city were constructed on top of old burial grounds, soldiers died on the streets of San Telmo while fighting the English and torture occurred in secret prisons during the Dirty War,

While Argentina’s capital city has plenty of ghost stories, Halloween is often viewed as a holiday that embodies U.S. cultural imperialism – something to keep in mind for those considering trick or treating on All Hallows’ Eve.

Halloween & All Saint’s Day in Argentina

In Argentina, October 31 is All Saints’ Eve. And while Mexico celebrates Día de los Muertos, Day of the Dead, on November 1st, here that day is known as All Saints’ Day, a solemn Catholic holiday.

Traditionally, commemoration of the dead ends on November 2, Día de los Flores (Flowers Day), when families take flowers to graves of loved ones, although this once important occasion has fallen out of favor.

While a daylong early November outing to the graveyard may not very common in Buenos Aires anymore, some of the dearly departed insist on not being forgotten.

Here’s a run-down of some of Buenos Aires’ most famous haunted locations:

Recoleta cemetery is the home to the remains of the country’s founding families, 26 Argentine presidents and of course, Eva Perón.

The most well-known Recoleta Cemetery ghost story dates to the early 20th century. It is the tragic case of 19-year-old socialite, Rufina Cambaceres who died suddenly while preparing to see a show at the Colón Theater.

She was transported to the cemetery by horse-drawn carriage on a rainy day after her death in 1902.

Due to the weather, workers left her casket in the cemetery’s chapel to be interred later.

The next day, a worker discovered the casket had been moved and the lid was out of place.

Suspecting a grave robbing, the family asked that the casket be opened.

When the lid was lifted, Rufina still had her jewelry in place, but the inside of the casket had been scratched and Rufina’s extremities were bruised.

The horrible truth was then revealed: she had been buried alive and tried to scratch her way out of the casket in a panic.

She had suffered an attack of cataplexy, which causes a comatose-like state, leading doctors to mistakenly believe she was dead.

In fact, she died in the casket of a heart attack, due to lack of air and panic.

Those who visit Rufina’s resting place will see that there is a life-size Art Nouveau statue of the young woman, with her hand on the door to her own mausoleum, a family tribute to ‘the girl who died twice.’

Buenos Aires second most famous cemetery and its largest is National Cemetery, Chacarita.

Founded in 1887, Chacarita Cemetery was created in response to the Yellow Fever epidemic.

The grounds are even creepier than Recoleta’s, with overgrown grounds, abandoned catacombs, an abundance of cobwebs — all set to a soundtrack of leaves shuddering in the trees.

Here tango great Carlos Gardel rests, along with founder of the Argentine Air Force, Jorge Newbery and an array of less famous, but equally mortal immigrants and Argentines.

The ghost stories associated with the cemetery include the hanged man in the tree, the phantom taxi driver with the license RIP 666.

Some claimed to have seen ghostly apparitions of race car driver, Juan Manuel Fangio, who is also buried here.

This graveyard is so scary, they say if you dare to go here after midnight you may end up staying forever.

The most emblematic landmark of Buenos Aires, El Obelisco, is said to be haunted by the spirit of a fallen worker.

While the monument was in construction in the 1930’s it was struck by lighting, causing a worker to lose his footing and fall to his death.

Porteño (Buenos Aires’ residents) believers say that on tempestuous nights you can still hear the scream of the worker falling to his death (or perhaps they are merely echoes of the near-daily protests here.)

In 1990 when Galerías Pacífico was being remodeled into the beautiful shopping center that it is today, construction workers discovered 15 small cells, and names and slogans scratched into the walls.

The workers informed their union leader who made an official appeal to the government asking for an investigation of the discovery.

At that point, city officials confirmed that during the Dirty War here functioned the ominous sounding ‘Clandestine Center of Detention and Extermination’ (CCDE).

A judge ordered an inspection. According to La Mañana newspaper, the day the inspection was to take place, the basement got flooded with oil from the boilers, destroying the evidence.

The same judge who ordered the inspection then dismissed it, saying there was no evidence to investigate, and the building’s remodel continued as before.

Official pardons from then-president Carlos Menem ensured that no ex-officers who worked in the clandestine prison would face justice either.

With the evidence destroyed and the investigation dropped, the dark history of Galerías Pacífico never got much attention.

The case reemerged in 1994 though, when Portuguese TV cameraman, Arturo Santana came to film a publicity spot for the shopping mall.

He had previously testified that while working in Buenos Aires in 1976 he was hooded, handcuffed, kidnapped off the street and forced into a Ford Falcon (the favored car of the military regime)and taken to a dank basement somewhere downtown for five days.

Although he tried to repress the terrible memory, he recalled some details such as being incarcerated with a Spaniard, an Italian and an Argentine from Cordoba.

When he returned to Buenos Aires with his crew to film the mall, he took the escalator to the lower level at Galerías Pacífico and started to get a strange feeling.

As he peered behind the camera he recognized distinct — and distantly familiar — tiles on the floor and suddenly became weak.

It was the same place where he was detained in 1976 before being transported to another torture camp.

Others who were detained and later regained freedom: Miguel Lamotta, Miguel Ángel Prado and Juan Carlos Comínguez never knew where they were being held at the time either, since the modus operandus of the military government was to blindfold detainees at the moment of their capture.

Santana told Pagina 12 that he wishes there was at least a plaque to acknowledge what happened here.

He told the newspaper, “It’s an emblematic building where people stroll at ease, they eat, they drink, they laugh, that is, they enjoy a paradise of consumption when down there it was hell.”

The shopping center has no interest in highlighting this part of the beautiful building’s history, but some say that at night in the basement of Galerías Pacíficos, when the crowds are gone, cold drafts will overtake visitors and they can feel the sad, heavy presence of those who were presumed to lose their life in the now-lively Buenos Aires’ shopping mecca.

→ Read about the Ghosts of the Buenos Aires Subway