One of Buenos Aires’ finest landmarks, the grand Teatro Colón occupies an entire city block and an even larger space in the hearts and minds of Argentines. 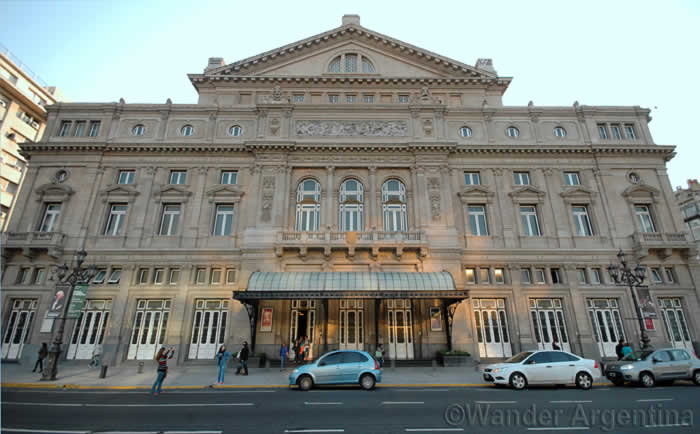 The theater is rated as one of the best five opera houses in the world for acoustics and overall comes in at number three, after La Scala in Milan and Teatro di San Carlo in Naples, according to National Geographic.

Since it opened over a hundred years ago, the Colón is celebrated for its countless world-class operas, ballets and classical music acts.

Pavarotti famously  commented that the acoustics were so perfect here that it made him nervous to perform because any mistake was amplified.

⇒ Take a guided tour of the Colón Theater & MALBA

Early History of the Teatro Colón

The Teatro Colón was originally in the Plaza de Mayo, now the site of the National Bank.

The original theater functioned between 1857 and 1888, but it wasn’t as popular as anticipated, and didn’t break even.

Since moving to its new location, an air of the unknown and intrigue has always lurked around the founding of the illustrious Colón.

Italian architect Francesco Tamburin laid the first stone of the new building in 1890 before dying unexpectedly a year later.

His partner Victor Meano took over, though the project had to stop in 1894 due to financial problems – the mix of private and public funding only added up to 15% of the cost of the project.

Meano had his own issues, after being caught in a love triangle with his valet, he was murdered by his servant in his own home in 1904.

The project was already beginning to lose money and the proposed opening date in 1892 was by now a distant memory.

The state injected more money into the project and put a third architect in charge, Belgian-born Jules Dormal (who also was behind the construction of La Plata’s Government House).

After nearly twenty years of construction, on May 25, 1908 the Colón theater finally opened its doors and wowed the crowds with Giuseppe Verdi’s opera, Aida.

Some parts of the building were still under construction, but the theater still managed to put on 14 operas and 54 functions that same year.

The magnificent seven-story building has almost 2500 seats and standing room for 500 spectators.

In the style of other 20th century European theaters it is in the shape of a horseshoe with an attractive dome on the ceiling, painted by Argentine Raúl Soldi in 1966.

The glittering chandelier at its center weighs a staggering five tons.

Every inch of the Colón is decorated with fine attention to detail, even the plush crimson seats are stuffed with horsetails, and all aspects of the theater are made to ensure the highest quality of acoustics possible.

The classical music pit has room for 120 musicians, the stage is slightly slanted to allow better viewing and has a revolving disk to allow for slick scene changes.

Ticket Prices at the Teatro Colon

Tickets at the theater have typically been accessible, as standing seats are available, meaning that people from all social strata can enjoy the theater.

Traditionally, the location of your seat is an indicator of your class.

Orchestra and box seats are the most desirable and expensive, allowing visitors access to the Golden Hall and the paparazzi-friendly entrance via the elegant Grand Staircase.

The prices rose substantially in 2012, some by a whopping 600%, though compared to similar opera houses across the globe, they still remain reasonable.

There are a number of free shows throughout the year, check the website linked below for details.

In the year 2000 a ‘Master Plan’ to renovate the Colón was made.

It was originally decided that the theater would remain open while the changes took place, but in 2006 Argentine folklorico goddess Mercedes Sosa sang at the closing ceremony amidst famous faces and disgruntled workers.

The plan was to open in May 2008, just in time for the Colón’s 100th birthday but the refurbishments were delayed.

After the 2007 elections, Buenos Aires then-mayor, Mauricio Macri pledged to make the Colón re-opening his priority and injected even more money into the project.

Grand Bicentennial Re-opening of the Theater

After much controversy and severe delays, the theater finally re-opened with a grand ceremony in May 2010, which coincided with Argentina’s bicentenary celebrations.

Many breathed sighs of relief as the acoustics were deemed intact and the Colón looked more resplendent than ever.

The tours are in English, Spanish and Portuguese. They are free for children under six and discounts are provided for seniors and students.

The best way to buy tickets to performances is to simply buy them at the box office.

You can purchase them online or on the telephone, but the price will be at the MEP rate, which is slightly lower than the ‘Blue Dolar’ exchange rate.

Still, for popular performances buying online may be the easiest way to secure tickets without having to cue.

In the more expensive seats, especially for a gala performance, formal wear is now again required.

The least expensive Paraíso (‘Paradise,’ or upper balcony seats) seats do not have a dress code, but visitors will still feel out of place if wearing sneakers and t-shirts.

Make sure to arrive on time — in contrast to most things in Argentina, punctuality is important at the Teatro Colón — visitors cannot enter after the performance begins.

→ To see the entire upcoming schedule of ballet, opera and orchestra and other performances the Teatro Colón check their website.

→ Read our Porteño Corner interview with Sarah Stern, an American harpist at the Colón Theater.