Luna Park, that art deco building downtown with the neon sign is Argentina’s answer to Madison Square Gardens and on any given Saturday night in Buenos Aires the 80-year old stadium still might be the place putting on the best show in town.

The Palacio de los Deportes, or ‘Sports Palace’, as it’s called is part of Buenos Aires’ history in the worlds of athletics, entertainment  and beyond.

It’s also the place where, in 1950 the Argentina team won – for the only time—the FIBA World Basketball Championship, beating out the United States.

‘The King of Tango,’ Carlos Gardel and the ‘Man’s Man of Tango,’ Julio Sosa were honored with funerals there as well as legendary heavyweight boxer, Ringo Bonavena, who is today buried in Recoleta cemetery.

Boxing has played a major part in the building of the Luna Park legacy, as well as other indoor sports such as tennis, cycling, volleyball, fencing and wrestling.

The venue is also known for putting on blockbuster concert events ranging from classical operas and ballets to the latest stars from pop and rock.

Famous international names to have appeared there through the years include James Brown, Frank Sinatra, Luciano Pavarotti and even Pope John Paul II.

The stadium’s history stretches back to 1912 when the name Luna Park first appeared in Buenos Aires.

Frederick Ingersoll, the American responsible for constructing over 40 Luna Parks around the world, designed the venue based on his original Coney Island concept.

During its first 20 years Luna Park was an amusement park and open-air venue located in the spot where the famous Obelisk now rises over 9 de Julio Avenue.

It hosted live theater, music events, and other novelties such as the first ever ‘radiotelephony’ transmission on September 14, 1923.

That broadcast allowed the boxing fans of Buenos Aires to listen to the famous bout between Jack Dempsey and Argentina’s Luis Angel Firpo, known as the ‘wild bull of the pampas,’ live from the New York Polo Grounds.

That historic fight was the first time that a Latin American fighter had a chance at the World Heavy Weight Title.

In 1932 the original Luna Park was demolished as the city began acquisition of property around 9 de Julio Avenue.

The Luna Park name was overtaken by Italian businessmen Ismael Pace and former amateur boxer, José Lectoure and relocated 10 blocks away to its current location, which takes up the square between Corrientes, Lavalle, Bouchard and Madero streets, in the heart of the downtown area and on the edge of the high-rent Puerto Madero neighborhood.

On inauguration day, March 5, 1932 Luna Park hosted an outdoor festival of boxing, setting the pugilistic tone of the new venue. Two years after its relocation, Lectoure and Pace had earned enough money to convert the stadium into the roofed complex it is today.

In the late 1930’s, at the behest of the pre-Peronist military government, World War II Nazi rallies were held at Luna Park creating extraordinary scenarios within that looked more like Berlin than Buenos Aires.

A 1938 Nazi rally attended by an astounding 20,000 included the participation of important politicians including Roberto J. Noble, the founder of Argentina’s largest newspaper, Clarín.

After Pace and Lectoure both died in the 1950’s, management of Luna Park was passed down to Lectoure’s nephew, Juan Carlos.

Juan Carlos, or ‘Tito’ Lectoure was an inexperienced twenty-year-old real estate agent until that point, but it is his name that would become synonymous with Buenos Aires’ Luna Park for the next fifty-odd years, until his passing in 2002.

Tito, a boxing fan from childhood, continued to develop the stadium into the focal point of the sport in Argentina. He enhanced his own role from arena manager into that of big fight promoter, bringing in raw boxing talent from all over the country to train in the attached gymnasium, before eventually providing the fighters with the stage to make their names and reputations before the public.

Tito set about remodeling the stadium so that its standing-room capacity reached 23, 500 people in 1960, making it the largest covered stadium in South America of the era.

The crowds flocked in, feasting on spectacles of quality boxing that could only be matched in a few other hallowed locales around the world, most notably, New York’s Madison Square Garden, and Boardwalk Hall in Atlantic City.

The reputations that were forged in those golden years of Argentine pugilism include such world-renowned champions as the aforementioned Oscar ‘Ringo’ Bonavena, Juan Roldán and Horacio Accavallo.

Even Muhammad Ali shuffled across the ring there. 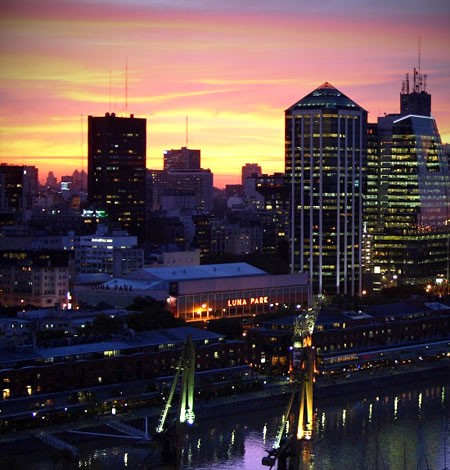 ‘Tito’ never forgot the showbiz roots of his venue either, and provided the general public with many a special night out, bringing in acts as diverse as the Bolshoi Ballet, Milan’s La Scala Orchestra, Ricky Martin, Oasis, the Moscow Circus, the Harlem Globetrotters and the obligatory ‘Holiday on Ice’.

Luna Park remains under the management of the Lectoure family, and the current owners have maintained the customs established by their forebears.

Boxing matches at Luna Park today, replete with rowdy crowds and some of the world’s most entertaining hecklers, continue the fight-night tradition which started back in 1923 with the broadcast of the Dempsey-Firpo fight.

Although Luna Park is not particularly celebrated for its acoustics, big international rock acts from the U.S. and Europe such as the Pixies, Smashing Pumpkins and Norah Jones still perform there when they tour Argentina.

In 2007 Argentina’s Secretary of Culture declared Luna Park a Historic National Monument. The decree proclaimed that, “As the stage for sporting events, concerts and political gatherings for more than 80 years, Luna Park holds a central place in the imagination of Argentines.”

Tickets to events can be purchased by phone or online with additional service fees at Ticket Portal (linked below) or in person from the stadium’s ticket office. Check their website for upcoming events.